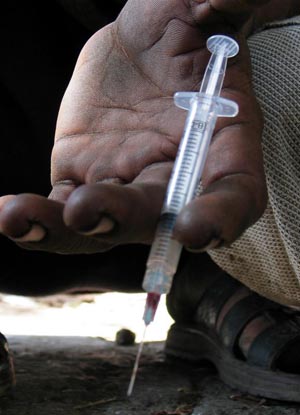 The syringe of a heroin addict is seen in an undated photo. (CNS photo/Akhtar Soomro, EPA)

VANCOUVER, British Columbia (CNS) — Archbishop J. Michael Miller of Vancouver called on Catholics to respond to a drug overdose crisis that had been sweeping the city, “cutting across every segment of society, devastating families and communities.”

In a pastoral letter released Feb. 16, Archbishop Miller said that following Jesus’ teaching would require Catholics to “scrutinize the sign of the times” and, in Vancouver, “these signs are calling the church to address today’s lethal crisis of drug overdoses.”

A report released by the British Columbia Coroners Service revealed that 914 people died of illicit drug overdoses in 2016; those statistics prompted the provincial government to declare a public health emergency. That number represented an 80 percent increase in overdose deaths from the previous year.

“I am inviting the church in Vancouver to respond to the overdose crisis by reaching out to our society’s suffering men, women and young people,” the archbishop. He said Catholics could respond to the crisis by:

— Urging elected officials to focus more attention on the crisis and the need for more treatment facilities.

Shaf Hussain, spokesman for Providence Health Care, which operates St. Paul’s Hospital in downtown Vancouver, said the surge in overdoses had created a sense of urgency around the issue “and rightly so.” However, with that sense of urgency, “it becomes a numbers thing. It is easy to lose track of what’s actually happening.”

“We need to talk of the causes, going back earlier in our society and in individuals’ lives. We need to ask, ‘Why is there a breakdown in this individual’s life?'” said Hussain.

While there were many community-based support services available for people addicted to drugs in Vancouver, Hussain said, “the challenge is coordination and integration, having a more coordinated system so people don’t fall between the cracks.” He said a person who was addicted to opioids could get access to methadone treatment, but if that person also suffered from mental issues was homeless and suffered from other health problems exacerbated by homelessness, a methadone treatment program could prove to be ineffective.

Hussain said there were many community-based support groups that needed volunteers with a variety of skills and praised the archbishop’s pastoral letter for offering “pragmatic suggestions” for Catholics to respond to the crisis.

“The need and the opportunity to fill that need is seemingly endless,” he said.

Drug users who bought fentanyl from drug dealers on the streets could receive a version of the drug made in an illegal processing lab. That would make it difficult to ensure a safe dosage. Fentanyl could be used to cut other illicit drugs like heroin or oxycodone.

Treatment for opioid addiction would include a substitution treatment program, during which the patient would be given methadone or Suboxone.

NEXT: Want to become a saint? Pray for someone who doesn’t like you