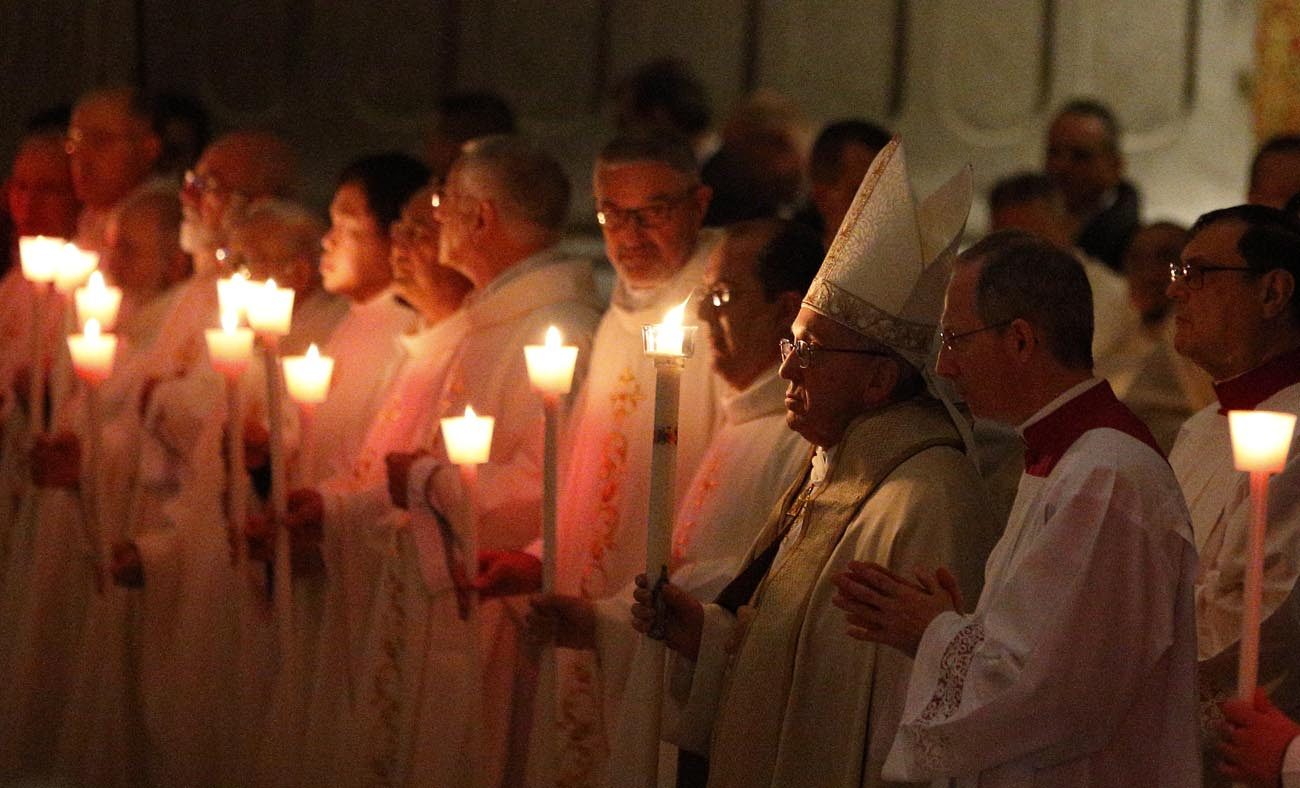 Pope Francis holds a candle as he arrives to celebrate Mass marking the feast of the Presentation of the Lord in St. Peter's Basilica at the Vatican Feb. 2. The Mass also marked the World Day for Consecrated Life. (CNS photo/Paul Haring)

VATICAN CITY (CNS) — When religious orders focus on survival rather than on sharing the joy and hope of faith in Jesus, they end up being “professionals of the sacred, but not fathers and mothers,” Pope Francis said.

“The temptation of survival turns what the Lord presents as an opportunity for mission into something dangerous, threatening, potentially disastrous,” the pope told consecrated men and women who joined him Feb. 2 for Mass on the feast of the Presentation of the Lord and the World Day for Consecrated Life.

Speaking as a fellow member of a religious order, Pope Francis urged religious to keep alive the faith, hope and audacity of the men and women who founded the orders to which they belong.

“We are heirs to those who have gone before us and had the courage to dream,” he said during the Mass, which began with the blessing of candles celebrating the presentation of Christ as the light of the world.

The feast day Gospel reading from St. Luke tells the story of Mary and Joseph bringing the newborn Jesus to the temple in fulfillment of the law. The elderly and pious Simeon and Anna are in the temple and rejoice when they see Jesus, recognizing him as the Messiah.

Simeon and Anna, the pope said, testified that “life is worth living in hope because the Lord keeps his promise.”

The pope said religious have inherited Simeon and Anna’s hymn of hope from their founders and elders, who “had the courage to dream.”

Hope in the Lord and the prophetic announcement of his presence “will protect us from a temptation that can make our consecrated life barren: the temptation of survival” and of preserving institutions above all else, said the pope, a member of the Jesuit order.

“The mentality of survival makes us reactionaries, fearful, slowly and silently shutting ourselves up in our houses and in our own preconceived notions,” he said. “It makes us look back to the glory days — days that are past — and rather than rekindling the prophetic creativity born of our founders’ dreams, it looks for shortcuts in order to evade the challenges knocking on our doors today.

“A survival mentality robs our charisms of power, because it leads us to ‘domesticate’ them, to make them ‘user-friendly,’ robbing them of their original creative force,” Pope Francis continued. “It makes us want to protect spaces, buildings and structures, rather than to encourage new initiatives.”

The temptation of survival, he said, “turns us into professionals of the sacred but not fathers and mothers, brothers and sisters of that hope to which we are called to bear prophetic witness.”

Like Mary and Joseph, religious are called to bring Jesus into the midst of his people, the pope said. “Only this will make our lives fruitful and keep our hearts alive.”

All Christians, but especially those consecrated with the vows of poverty, chastity and obedience, are called to be the leaven of the Gospel in the world, he said.

“Perhaps there are better brands of flour, but the Lord has called us to be leaven here and now, with the challenges we face. Not on the defensive or motivated by fear,” he said, “but with our hands on the plow, helping the wheat to grow, even though it has frequently been sown among weeds.”

“Putting Jesus in the midst of his people,” he said, “means taking up and carrying the crosses of our brothers and sisters. It means wanting to touch the wounds of Jesus in the wounds of a world in pain, which longs and cries out for healing.”

NEXT: Knights of Malta to continue focus on the poor, grand chancellor says