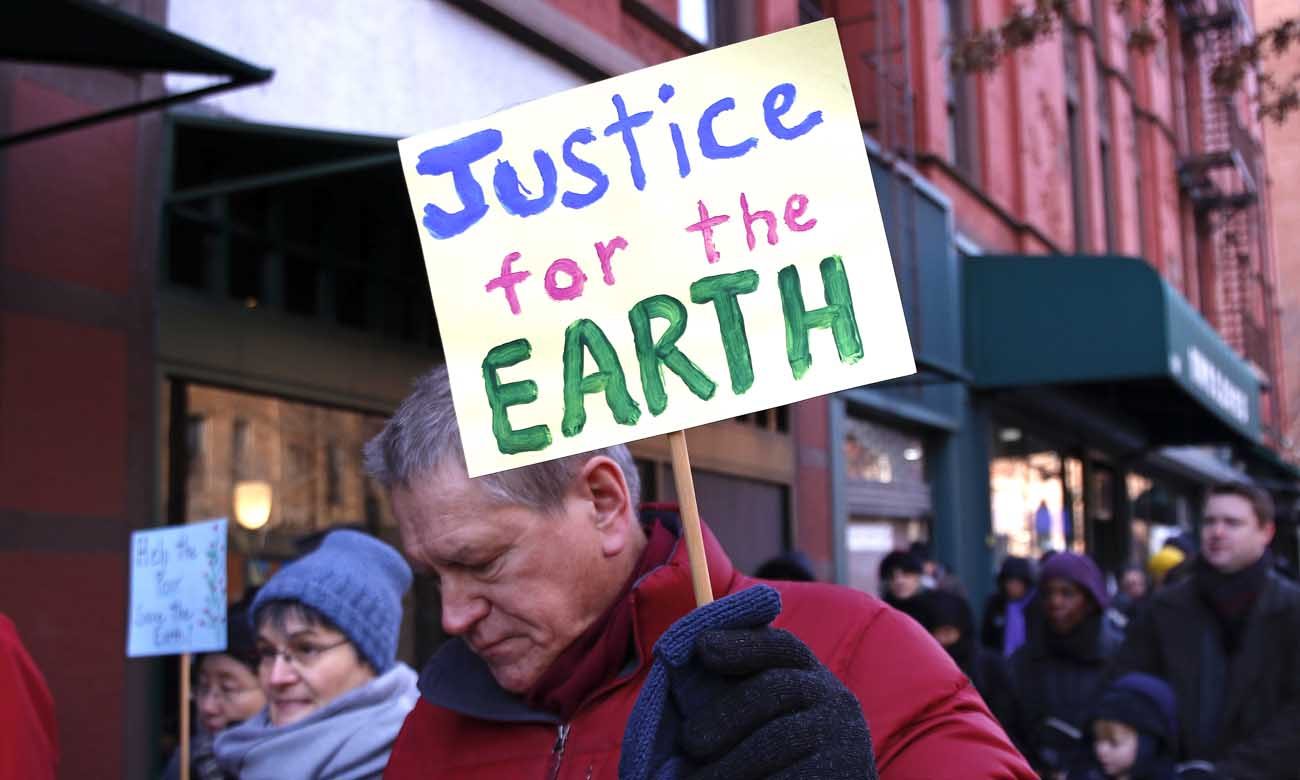 A man carries a sign during the annual Martin Luther King Jr. Day Interfaith Peace Walk Jan. 18 in the Upper West Side neighborhood of New York City. The theme of this year's event was "Hear the cry of the earth and the cry of the poor," from Pope Francis' encyclical "Laudato Si'." Seventeen Republicans in the House of Representatives are calling on their colleagues to express a commitment to “conservative environmental stewardship.” (CNS photo/Gregory A. Shemitz)

UPDATED – WASHINGTON (CNS) — Seventeen Republicans in the House of Representatives are calling on their colleagues to express a commitment to “conservative environmental stewardship.”

Rep. Elise Stefanik of New York introduced a resolution in the chamber March 15 with 16 co-sponsors. At least four are Catholic.

A spokesman for the Catholic Climate Covenant expressed support for the measure, saying it could widen the discussion of environmental concerns and climate change in particular.

“We’re very encouraged about this as the first step toward bipartisan dialogue,” said Jose Aguto, associate director of the organization, which had worked with House Republicans on the measure. “It is heeding Pope Francis’ appeal to dialogue on climate change.”

The pope discussed care for creation and the importance of elected leaders working together for the common good on the many issues facing the country during his address to Congress Sept. 24, 2015. The speech came three months after the release of “Laudato Si’, on Care for Our Common Home,” the pope’s encyclical on the environment and human interaction with the earth and its inhabitants.

“We want this to be the foundation stone, to be an expression of Catholic concern about climate change not only to Congress and the administration, but to the nation and to the world that we care about this,” Aguto told Catholic News Service.

“We are seeking to lift up the Catholic voice of concern about climate change in the U.S. community,” he added. “We see this as a moral call to Congress.”

The resolution’s introduction drew support from the chairmen of two committees of the U.S. Conference of Catholic Bishops.

Bishop Frank J. Dewane of Venice, Florida, chairman of the Committee on Domestic Justice and Human Development, and Bishop Oscar Cantu of Las Cruces, New Mexico, chairman of the Committee on International Justice and Peace, said in a statement that conversation among members of Congress about climate change and the environment is important for the country.

“The Catholic Church has consistently been an advocate for environmental stewardship and Pope Benedict XVI presciently called care for creation a ‘sign of the times.’ Environmental challenges are not going away and it is a sign of hope to see political leaders rise to meet a challenge that is the common responsibility of all,” Bishop Dewane said.

Bishop Cantu said the representatives who introduced the resolution demonstrate that “stewardship of creation is an issue that rises above political partisanship.”

“It is in the interest of lawmakers in all parties to recognize the protection of the environment as an important responsibility and to explore the numerous rationales for taking action,” he said. “This resolution provides an important avenue toward answering the appeal in ‘Laudato Si” for ‘a new dialogue … that includes everyone.'”

The introduction comes as Congress is bitterly divided on the issue of climate change and its causes. Some members are seeking aggressive action to limit the release of greenhouse gases that get trapped in the atmosphere while others have claimed the science remains under debate.

The resolution calls for the House to commit “to working constructively … to create and support economically viable and broadly supported private and public solutions to study and address the causes and effects of measured changes to global and regional climates, including mitigating efforts and efforts to balance human activities that have been found to have an impact.”

The Catholic Climate Covenant is undertaking a campaign to gain support for the resolution to be adopted, Aguto said. Outreach is planned to parishes, schools, religious congregations.

A letter supporting the resolution from 12 Catholic organizations was to be sent to Congress after the introduction, Aguto said. The organizations are asking representatives to join the bipartisan House Climate Solutions Caucus and are offering their assistance on the climate change front.

A similar resolution was introduced by Rep. Christopher Gibson, R-New York, in September 2015, days before Pope Francis addressed Congress on a number of topics, including care for the environment. The resolution was referred to the House Subcommittee on Energy and Power where no action was taken.

NEXT: Author maintains that Muslims have influenced America for centuries