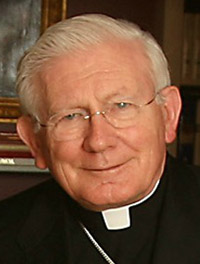 WASHINGTON (CNS) — Cardinal William H. Keeler, Baltimore’s 14th archbishop, who was an international leader in Catholic-Jewish relations and the driving force behind the restoration of America’s first cathedral, died March 23 at his residence at St. Martin’s Home for the Aged in Catonsville. He was 86.

The archdiocese said the cardinal will lie in repose March 27 at the Basilica of the National Shrine of the Assumption in Baltimore. His funeral will be celebrated March 28 at the Cathedral of Mary Our Queen, also in Baltimore.

“One of the great blessings in my life was coming to know Cardinal Keeler,” said Baltimore Archbishop William E. Lori in a statement. “Cardinal Keeler will be greatly missed. I am grateful to the Little Sisters for their devoted care for the cardinal.”

Cardinal Keeler was the bishop of Harrisburg, Pennsylvania, when he was appointed the 14th archbishop of Baltimore in 1989. Pope John Paul II made him a cardinal in 1994. He retired in 2007. As president of the U.S. bishops’ conference from 1992 to 1995, he participated in a wide range of national and international issues.

Archbishop Charles Chaput said he was “deeply saddened” to learn of the cardinal’s death.

“As an alumnus of St. Charles Borromeo Seminary and former bishop of Harrisburg, he had close ties to the Philadelphia region and the Commonwealth of Pennsylvania. He served God’s people with apostolic zeal, charisma, and kindness in many ways over several decades. All those who mourn Cardinal Keeler’s passing can find consolation in knowing that he served the Lord well, and that the Lord has welcomed him home,” Archbishop Chaput said in a statement March 23.

“On behalf of the Church in Philadelphia, I extend prayerful condolences to Cardinal Keeler’s family and many friends as well as Archbishop William E. Lori and the priests, religious, and lay faithful of the Archdiocese of Baltimore.

“I ask the people of the Archdiocese of Philadelphia to offer prayers for Cardinal Keeler, and our priests to offer Masses for the happy repose of his soul. All of us are very grateful for the gifts of his life and service to the Universal Church. May God grant him the gift of eternal life, and give peace and solace to all those who loved, admired, and respected him.”

Cardinal Keeler’s “roots and Catholic education in Lebanon, Pennsylvania, prepared him to do great work for the people of God.” — Bishop Ronald Gainer of Harrisburg.

As part of his work with what is now the U.S. Conference of Catholic Bishops, Cardinal Keeler developed a reputation for effectively building interfaith bonds. He is particularly noted for his work in furthering Catholic-Jewish dialogue. He was appointed moderator of Catholic-Jewish Relations for the USCCB.

“As a priest, bishop of Harrisburg and archbishop of Baltimore, the cardinal worked to bring the hope of Christ to people’s lives,” said Cardinal Daniel N. DiNardo of Galveston Houston, who is president of the USCCB. “He also built bridges of solidarity to people of other faiths as a leader in ecumenism and interreligious affairs.

“Cardinal Keeler was a dear friend. The most fitting tribute we can offer is to carry forward his episcopal motto in our daily lives: ‘Do the work of an evangelist,'” Cardinal DiNardo said in a statement.

He called the late cardinal “a servant of priestly virtue and gentlemanly manner” who is remembered by the USCCB for “his generosity of spirit in service to his brothers and the people of God.”

In his statement, Archbishop Lori remarked on “the respect and esteem” in which the cardinal was held by his brother bishops, and praised his leadership in Jewish-Catholic relations and in Orthodox-Catholic relations. Archbishop Lori also said he was known for his “prowess as a church historian” and had a “deep love and respect for the history and heritage of the Archdiocese of Baltimore.”

Cardinal Keeler was an ardent promoter of the Catholic Church’s teaching on the sanctity of all human life. He twice served as chairman of the U.S. bishops’ Committee for Pro-Life Activities and testified at all levels of government on legislation ranging from abortion to euthanasia to capital punishment.

Among the cardinal’s many accomplishments in the Baltimore Archdiocese, Archbishop Lori highlighted “the wonderful visit of Pope St. John Paul II to Baltimore in 1995, the restoration of the Basilica of the Assumption and the creation of Partners in Excellence which has helped thousands of young people from disadvantaged neighborhoods to receive a sound Catholic education.”

“When I would visit the cardinal at the Little Sisters of the Poor (in Cardinal Keeler’s retirement), I gave him a report on my stewardship and told him many times that we were striving to build upon his legacy -– a legacy that greatly strengthened the church and the wider community,” Archbishop Lori said.

Born in San Antonio and raised in Lebanon, Pennsylvania, William Henry Keeler knew from an early age he was called to the priesthood. In a 2005 interview with the Catholic Review, Baltimore’s archdiocesan newspaper, he recalled visiting his grandfather’s farm in Illinois when the local Catholic pastor stopped by for a visit – pointing to the 4-year-old boy and announcing that he would one day become a priest.

He was ordained a priest in Rome July 17, 1955. He served as assistant pastor of Our Lady of Good Counsel in Marysville, Pennsylvania, before taking on other assignments as secretary to Harrisburg Bishop George L. Leech and as a “peritus,” or special adviser, during Second Vatican Council meetings in Rome.

He later was named vice chancellor and vicar general of the Harrisburg Diocese and named an auxiliary bishop for the diocese in 1979. Four years later he was appointed its bishop.

“He was a true churchman whom we are greatly honored to have called a priest of the Diocese of Harrisburg,” said Bishop W. Ronald Gainer, head of the diocese since 2014. “His roots and Catholic education in Lebanon, Pennsylvania, prepared him to do great work for the people of God.

“This area and diocese benefited significantly from his leadership and passion for service and evangelization,” Bishop Gainer said. As a priest and bishop, Cardinal Keeler “worked fruitfully to advance increased cooperation and warmer relationships between different Christian communities, both locally and nationally. … I thank God for his priestly life and ministry and for his inspiring service to all.”

As Baltimore’s archbishop and head of the nation’s first archdiocese, the 1995 papal visit to Baltimore – at Cardinal Keeler’s invitation was one of the prelate’s proudest moments. St. John Paul II celebrated Mass at Oriole Park at Camden Yards, visited the Cathedral of Mary Our Queen and the Basilica of the National Shrine of the Assumption of the Blessed Virgin Mary, shared a meal at Our Daily Bread and encouraged seminarians at St. Mary’s Seminary in Roland Park.

A prodigious fundraiser, Cardinal Keeler established what is now known as the Archbishop’s Annual Appeal. In 1997, he launched a major capital campaign known as Heritage of Hope that raised more than $137 million from more than 39,000 gifts and pledges.

One of the cardinal’s last major efforts was the $32 million campaign to restore the basilica. After more than two years of construction, the building was rededicated Nov. 4, 2006 — 200 years after the basilica’s cornerstone was laid. More than 240 bishops from across the nation were there for the celebration, marking the first time all the country’s bishops gathered in the basilica since 1989 when the archdiocese marked its bicentennial.

Father Michael White, pastor of the Church of the Nativity in Timonium and Cardinal Keeler’s first priest-secretary in Baltimore, said Cardinal Keeler “put Baltimore on the map in the Catholic Church.”

Father White noted that in addition to the papal visit, Cardinal Keeler hosted spiritual gatherings in Baltimore in the late 1990s with St. Teresa of Kolkata and Ecumenical Patriarch Bartholomew of Constantinople. Leaders within the Catholic Church and from other faith traditions regularly visited him in Baltimore and “not a day went by” when bishops from other parts of the country didn’t call for the cardinal’s advice, Father White said.

Cardinal Keeler suffered serious health problems in the latter years of his ministry. He underwent knee replacement surgery in 2005 and had to have brain surgery in 2006 following a car accident in Italy that resulted in the death of a friend, Father Bernard Quinn of Harrisburg.

In the early part of his retirement, Cardinal Keeler remained focused on many of the same priorities he had always held: promoting better relations between the Catholic and Jewish communities, celebrating Mass every day and staying in touch with friends.

In his final years, one of the U.S. church’s great communicators was frustrated by finding it difficult to find the words to express himself.

“His final years of illness were lived in silent, Christ-like dignity and acceptance to the will of God,” said Cardinal Edwin F. O’Brien, Cardinal Keeler’s immediate successor in Baltimore, who is grand master of the Equestrian Order of the Holy Sepulchre.

Referring to Cardinal Keeler’s accomplishments as “monumental,” Cardinal O’Brien added that he prays that the cardinal “enjoy a joyful, eternal rest in the Lord he served so generously.”