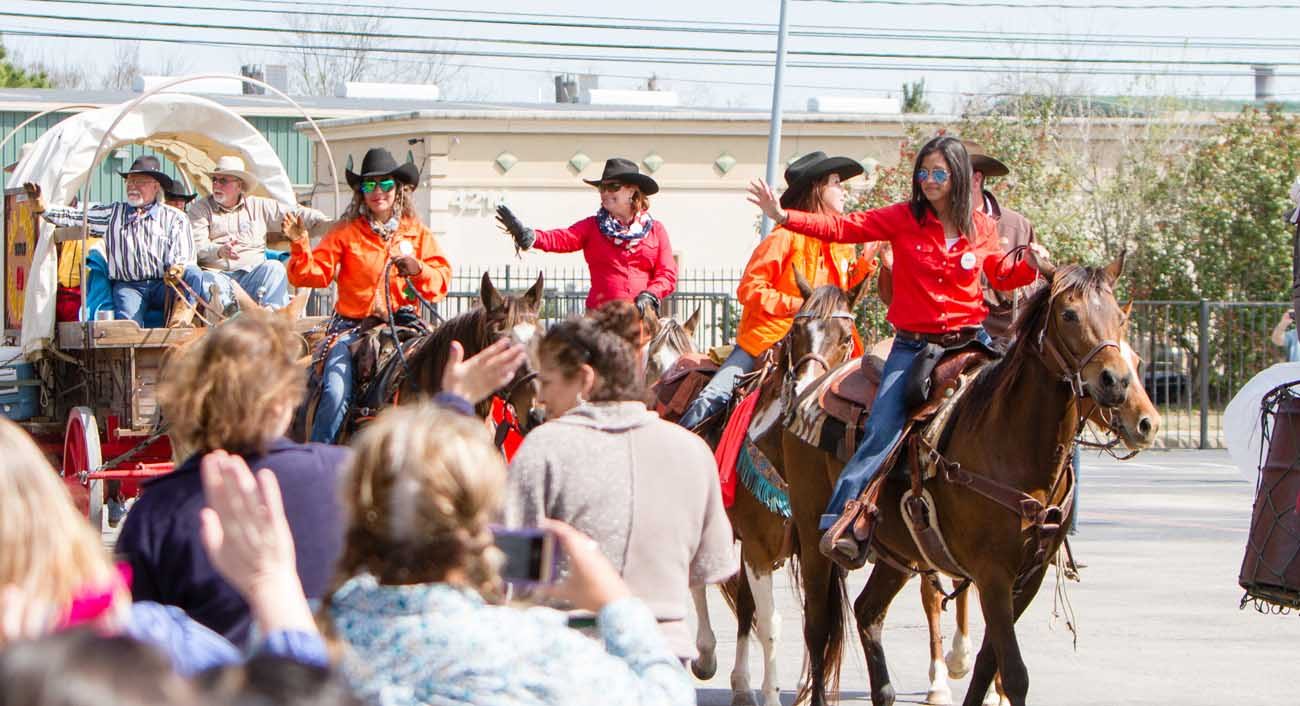 While the principal and her staff rounded up the 300 St. Ambrose Catholic School students to the safety of the grass surrounding the blacktop, Father Smaistrla was the first to see them.

Led by flags and banners, the Sam Houston Trail Ride clopped down the road and made its annual stop at the northwest Houston parish, where Father Smaistrla is pastor.

Students, prekindergarten to eighth grade, welcomed the wagons, horses and riders with hoots, hollers and howdies from the riders, many clad in their finest Western wear.

They were bound for the world’s largest livestock show and rodeo, the Houston Livestock Show and Rodeo, held March 7-26 this year.

The Sam Houston group is the second oldest trail ride to trek to the rodeo, having made the journey since 1955.

“We’ve been coming to St. Ambrose for years,” Trail Boss Bruce Fraysur told the Texas Catholic Herald, newspaper of the Archdiocese of Galveston-Houston. Trail bosses like Fraysur ensure the safety of the riders, animals and equipment on the ride, as well as the public who watch and visit.

“Horsey!” the child shouted back. 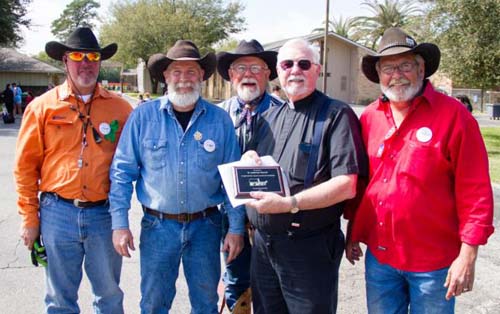 “That’s my horse’s name, too!” Fraysur said, laughing as he watched other students gawk and pet a white horse a gallop away, some for the first time.

“This is what it’s all about. We love seeing the kids,” he said.”

Stopped for lunch, most riders dismounted, heading to the chuck wagon, while others met with students. On the menu? Tuna and seafood lasagna for those observing the Lenten fast; a grill served up burgers for those who didn’t. Parents and parishioners sat on the nearby grass enjoying the parish’s fish fry.

The Sam Houston Trail Ride’s stop at the school was March 3, dubbed Go Texan Day. A hat tip to Texas history, the annual citywide designation rallies communities across the region to celebrate Texas heritage, and signals the beginning of the livestock and rodeo show.

It was the last full day of a 70-mile ceremonial ride from Montgomery to Houston.

For Father Smaistrla, the day brought many good friends to his parish. Father Smaistrla previously was a pastor at St. Mary Catholic Church in Plantersville, where he rode horses with some of his parishioners. Several of his then-parishioners are part of the Sam Houston Trail Ride.

Priests in the Galveston-Houston Archdiocese were saddled up to serve the faithful long before Father Smaistrla joined the clergy. Missionary priests traveled by horse to minister to rural towns throughout southeast Texas, according to archdiocesan history.

The trail ride gives students “a good sense of Texas history,” Fritsch said, with some learning about the events that led to Texas statehood. “It’s that touch with Old Texas that they like.”

Dozens of horses, several wagons and support vehicles take part in the annual trail ride. Local fire departments provide water for the horses and livestock along the way.

Reminiscent of the pioneer spirit that forged the Old West, more than 3,000 continue to join the rodeo’s signature tradition and honor the trails that linked Texas settlements.

Today, trail ride groups are permanent social organizations with officers and leaders, and they honor different aspects of Texas heritage. Some take historical trails, like the Sam Houston riders who take the trail forged by Texas hero Sam Houston.

In all there were 13 trail rides, which converged in downtown Houston for a major parade March 4 to open the rodeo season.

NEXT: Cardinal William Keeler, retired archbishop of Baltimore, dies at 86