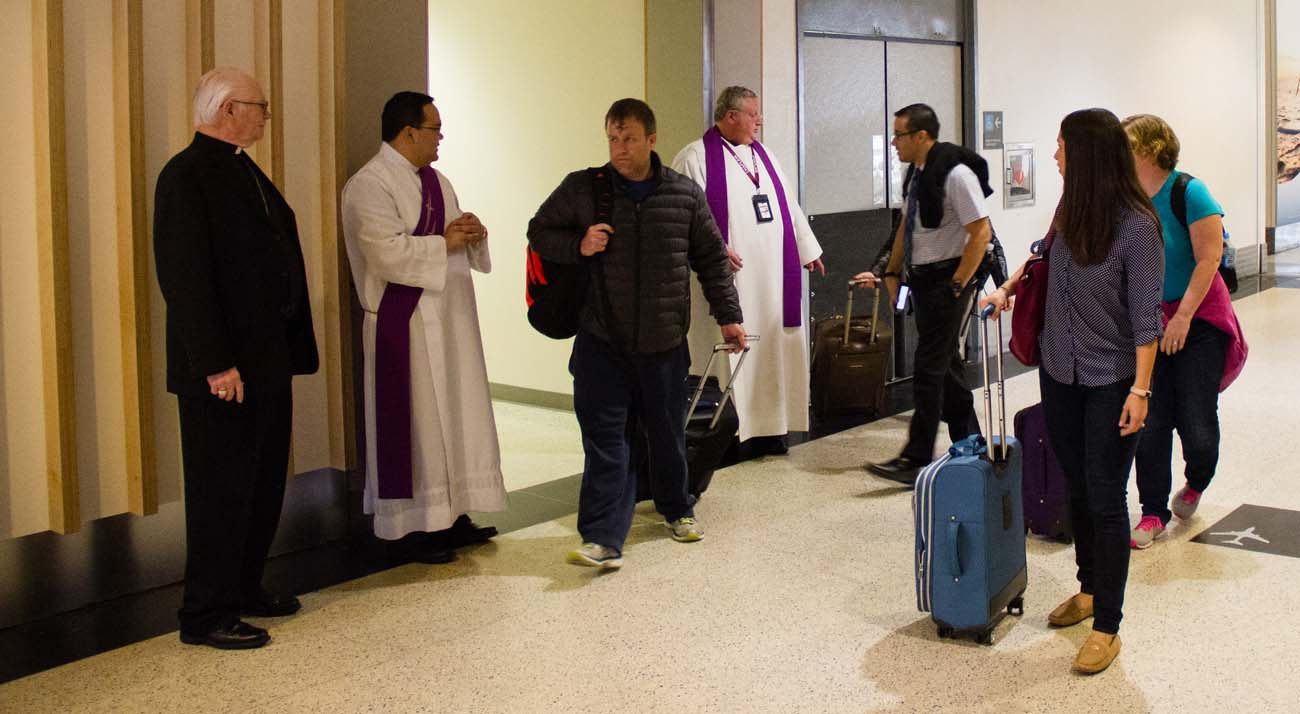 A traveler walks out of the Interfaith Chapel after receiving his ashes on Ash Wednesday at Bush Intercontinental Airport in Houston March 1. (CNS photo/James Ramos, Texas Catholic Herald)

HOUSTON (CNS) — When Nick Guarisco landed at Bush Intercontinental Airport on Ash Wednesday morning, he planned to catch a late afternoon Mass in his hometown of Baton Rouge, Louisiana, to get his ashes, but Father Charles Sampler had a different plan.

Stationed outside the Terminal C Interfaith Chapel March 1, Father Sampler greeted anyone who walked past. A visible and verbal reminder that it was indeed Ash Wednesday, the pastor of nearby St. James Catholic Church calmed fears of missed flights: “It takes just 15 seconds to get ashes,” he’d say.

Hearing this, Guarisco, 23, immediately turned the corner into the chapel where Deacon Paul Pinion marked his forehead with ashes.

Noting the difficulties of being a young Catholic in college, the Louisiana State University student said ashes help him to “stay true to (his) faith and not get off the path. Now with Lent here, (the ashes) remind you to get prepared.”

In college “there’s a lot of sin to avoid,” he said. Inspired by the deep faith of his grandparents, Guarisco wears a scapular given to him by his grandmother. He had Deacon Ray Odeon bless his brown scapular in the airport chapel.

Travelers like Guarisco are exactly who Father Sampler, Deacon Pinion and Deacon Odeon want to minister to at the airport.

People are excited because people don’t expect to see ashes distributed at an airport, said Father Sampler, who estimated more than 200 received ashes in a span of two hours. Flight attendants and captains in between flights, along with local airport staff and travelers, all took Father Sampler’s invitation and received ashes.

Father Sampler’s voice seemed to rise above the din of rolling suitcase wheels, terminal announcements and clinking glass from a nearby restaurant.

“We’re glad to be here at the airport to minister to the people, the travelers,” he said. Most think travel is always for vacation or for work, but sometimes a death in the family is a reason for travel, and the chaplains are here for that too, he said. As part of a Catholic airport chaplain program, Catholic priests like Father Sampler and deacons offer counseling for those who need it.

Father Sampler said he heard several confessions, noting he was happy to offer the Sacrament of Reconciliation, “which is always a blessing.”

Deacon Pinion assisted in distributing ashes and said both travelers and airport employees were grateful to have the chance to celebrate Ash Wednesday.

“Sometimes people can’t attend Mass because of work, so it’s good to minister at the airport,” he told the Texas Catholic Herald, newspaper of the Archdiocese of Galveston-Houston. “It’s a form of service to the church and to his people. I’m grateful to be one of the servants.”

Just outside the chapel, a passenger said: “I’ve been traveling on Ash Wednesday for the last five years and I’ve never been able to receive my ashes until today.”

The distribution of ashes drew dozens to stay inside the chapel, several stopping to say rosaries. A small space, the chapel offers a handful of pews and a stained glass window for reflection and quiet in a busy airport that services more than 43 million passengers annually. Thirteen of the nation’s 15 busiest airports, including Houston, have dedicated chapels, according to a 2015 Pew survey.

On his way back to Louisiana, Guarisco opted out of his home state’s Mardi Gras tradition for a trip to Colorado. He said that in a time when a lot of people his age struggle with their beliefs, “it’s good to still stay in touch with the faith.”

NEXT: Pope Francis, Day would have been ‘good friends,’ says granddaughter