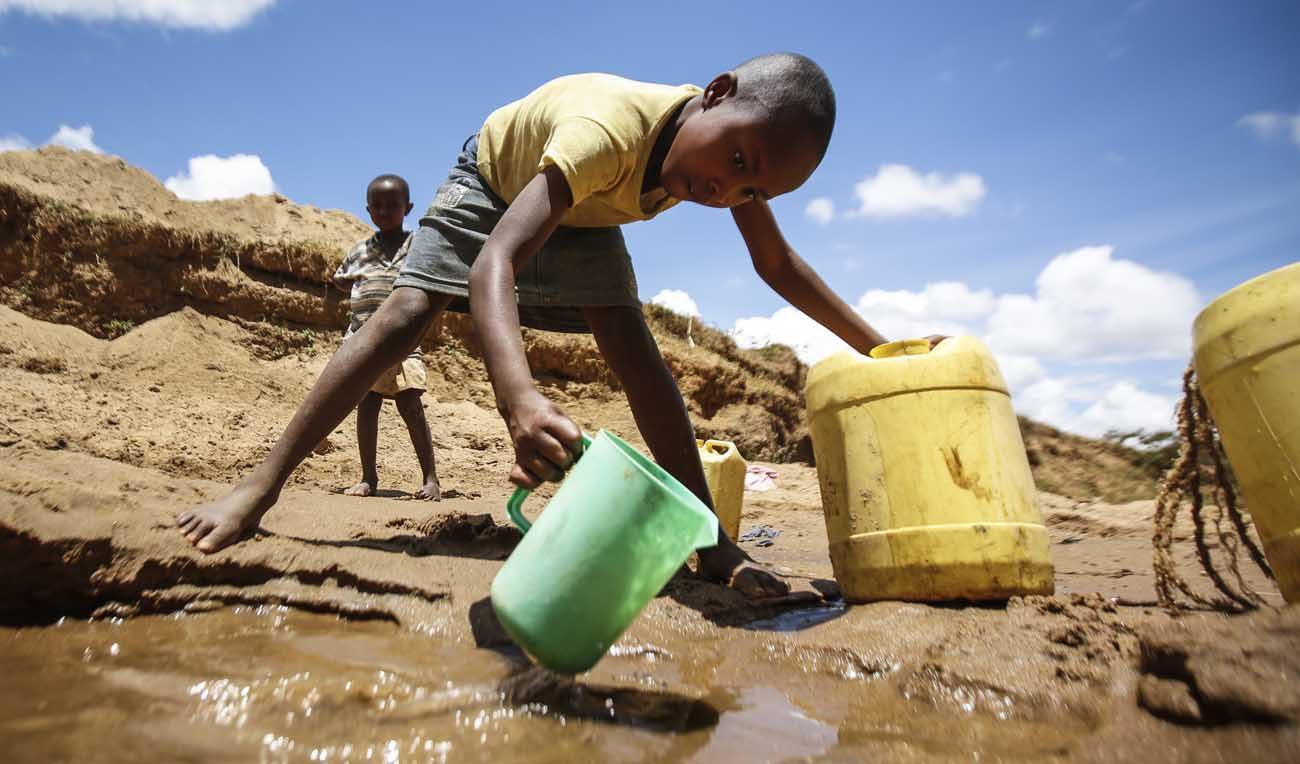 A boy collects water in a dry riverbed in Kitui, Kenya, in this 2015 file photo. (CNS photo/Dai Kurokawa, EPA)

NAIROBI, Kenya (CNS) — Catholics in Nairobi delivered a convoy of aid to the dioceses of Isiolo and Marsabit, where thousands are facing a severe drought.

The convoy, carrying 80 tons of food and supplies valued at nearly $78,000, included items donated by parishes in the Archdiocese of Nairobi, following an appeal by the Kenya Conference of Catholic Bishops in February. The diocese also sent $16,500 in cash.

Bishop Anthony Ireri Mukobo of Isiolo told Catholic News Service that the convoy was “a real Lent. It’s going to save lives.”

“We are now embarking on distributing the food in parishes,” he added. “Some of the neediest areas are distant and the roads are poor.”

He said more relief would be needed because the drought was expected to continue.

As the convoy left March 17, Nairobi Cardinal John Njue said the bishops had decided to mobilize for food aid because the drought had hit half of the counties in Kenya.

“I extend my appeal to Christians and the people of goodwill to … continue donating funds, food and nonfood items to save lives,” he said.

Stephen Kituku, national director of Caritas Kenya, said the appeal was ongoing because the forecast showed that the drought was not likely to end soon. At least 3 million Kenyans need food aid.

“The situation is grave, but we will continue mobilizing for support to ensure that no one goes hungry,” he said.

In most affected regions, rains have failed for two seasons, resulting in wide crop failure, acute water shortages and a decline in animal productivity. Food security and nutrition issues have overcome some people’s ability to cope.

On Feb. 10, Kenya declared the drought a national disaster.

In Marsabit, Father Ibrahim Racho, the diocese’s vicar general, said most of population is affected by the drought and more than 60 percent of animals are dead.

“The water scarcity worsens each day, as boreholes continue to break down due to over use. Nearly all dams and pans have dried up,” Father Racho told CNS.

He highlighted an urgent need for food, animal feed, water and medicine.

The priest said he feared delivering relief food, without consulting the community, might not solve the problem, since some people might not find the kind of food they can eat.

“Cash dispatches have worked very well, since the people can buy the can of the food they can eat,” said Father Racho.

Kituku said church officials were discouraging the delivery of food aid in some areas where the people are still strong.