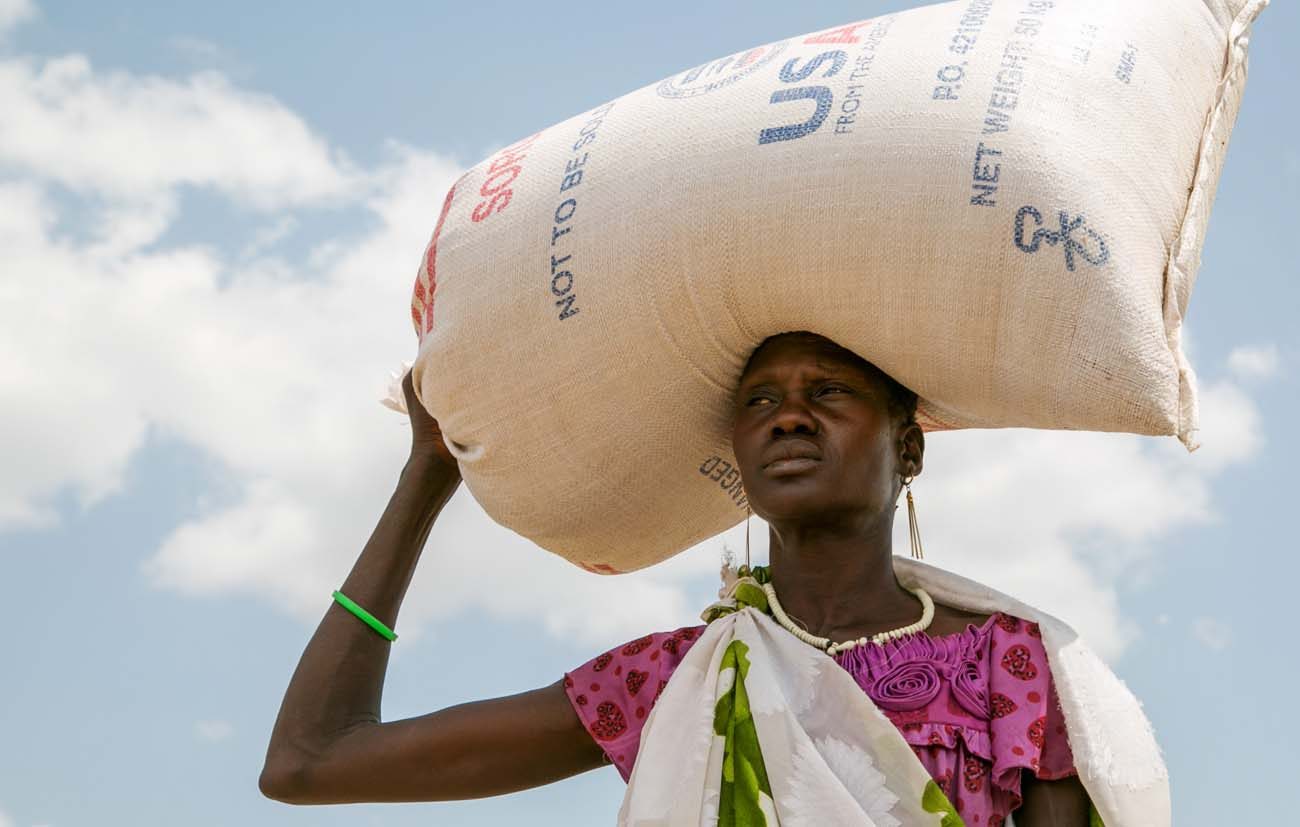 A woman carries food provided by U.S. Agency for International Development in Pajut, South Sudan, March 17. Catholic Relief Services is providing food assistance, with USAID funding, to communities and people who are returning to the area after being displaced during violence in 2013. (CNS photo/Nancy McNally, Catholic Relief Services)

VATICAN CITY (CNS) — Some 5 million people in South Sudan — half of its total population — are on the brink of starvation and a quarter of a million children are already severely malnourished, a representative from the U.S. bishops’ Catholic Relief Services said.

Famine has already gripped 100,000 people in Unity State and other parts of the nation, and if emergency food and aid don’t get to people soon, “people will start starving to death or they will die of dehydration,” Jerry Farrell, country representative in South Sudan for CRS, told Catholic News Service March 21.

Farrell and other representatives from dioceses, CRS, Caritas and other Catholic aid and development agencies working in South Sudan were in Rome for a meeting March 21-22 hosted by Caritas Internationalis to discuss the worsening crisis in the country.

Despite the ongoing civil war, if the security situation does not escalate, Pope Francis hopes to visit the ravaged nation sometime in October, Bishop Erkolano Tombe of Yei, South Sudan, told Reuters March 21.

“We have been informed (by a Vatican official) that he will come in October, but we don’t know the exact date yet,” said the bishop, who was in Rome attending the Caritas Internationalis meeting. If the security situation “remains as it is now, he will come,” he said.

Pope Francis said in late February that he wanted to go to South Sudan and that Anglican, Presbyterian and Catholic leaders there had urged him to visit together with Anglican Archbishop Justin Welby of Canterbury.

The pope said officials were studying whether the local situation was “too dangerous. But we have to do it, because they — the three (Christian communities) — together desire peace, and they are working together for peace.”

With so much fertile land in the country, the food shortages and famine are man-made, Farrell said, a result of almost four years of violence, displacement, climate change and economic collapse with the rate of inflation nearing 800 percent.

The Catholic Church has always been in a unique position to respond to humanitarian disasters no matter how bad the situation escalates, Farrell said.

“The church never closes down. It’s extraordinary and it’s part of the community,” he said.

Parishes and church-run schools, hospitals and other institutions all open their doors to protect and care for people fleeing from violence. Through a network of churches and religious orders, “within 24 hours we can provide assistance” to any newly displaced.

Even with the risk of increasing violence and insecurity, the priests, nuns or church workers “might have to flee in the bush with the people for a day or so. But they come back, celebrate Mass” and immediately mobilize the national and international networks in place to send out appeals and distribute the aid to the neediest or most vulnerable, he said.

“The church is a lifeline in South Sudan, not only spiritually, but also physically. We can distribute medical supplies, food, shelter, water, through the church in communities where you would think nobody could go,” he said.

The church and its local partners also know exactly what a community needs, so, for example, when violence struck Wau last year, CRS found out the people there didn’t need food aid, but rather kitchen utensils — portable stoves, pots and pans — because their homes had been looted.

To be able to respond adequately to such unpredictable disasters, “you have to be able to talk to people with on-the-ground knowledge, and the church has that in spades,” he said.

One area along the Nile River is so pristine and abundant, “I can drop a line and pull out a catfish that weighs 50 pounds,” said Farrell, who insisted he was not a patient or practiced fisherman. But the people can’t fish or eat if they don’t have security or equipment.

People will fish, plant and harvest as long as conflict does not prevent their access to the areas and as long as they do not keep losing land and equipment to arson and looting, he said.

The local churches — Catholic, Presbyterian and Episcopalian communities — “have credibility and respect” with almost all sides in the civil war, he said. Many church leaders can get feuding groups to at least stop the fighting in their area and have the groups sit down for talks.

“Because the basis of the conflict in South Sudan is political, the solution is also political,” he said, “so the church has a very important, critical role in bringing the parties together and does this all the time at the grass-roots level in sponsoring neutral forums.”

“Everyone has to stop fighting. The people in South Sudan are so tired, they are bone-weary of fighting and there is a hunger for peace,” he said.

In the meantime, South Sudan desperately needs emergency relief, long-term development programs, medical care, schooling and help for people to “strengthen their dignity” by rebuilding their lives and bringing peace.

“As a Catholic organization, we’re blessed because we can actual work in all those areas at the same time,” he said.