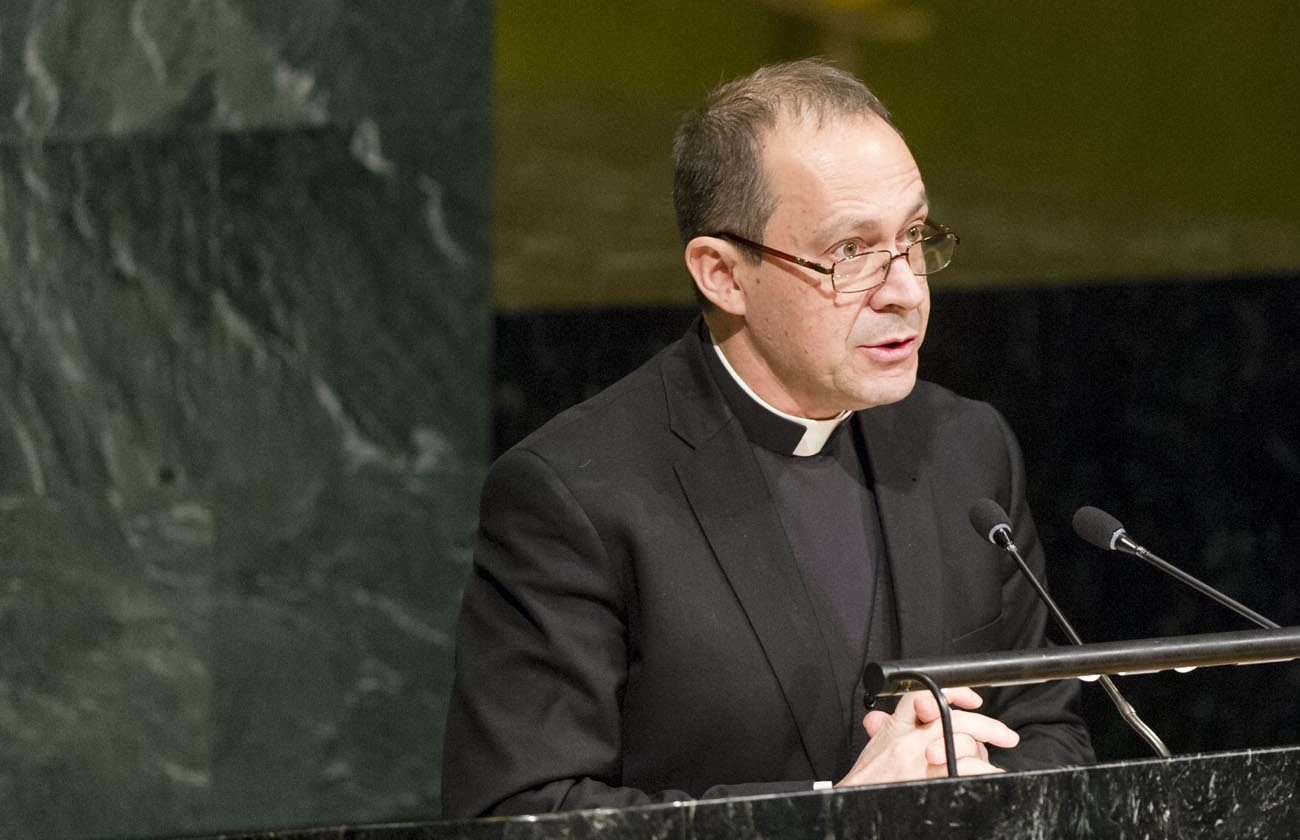 VATICAN CITY (CNS) — Today’s threats to global peace and security must be countered through dialogue and development, not nuclear weapons, Pope Francis told the United Nations.

“How sustainable is a stability based on fear, when it actually increases fear and undermines relationships of trust between peoples,” the pope asked in a letter sent to a U.N. meeting on nuclear arms.

“International peace and stability cannot be based on a false sense of security, on the threat of mutual destruction or total annihilation, or on simply maintaining a balance of power,” he said in the message, released by the Vatican March 28. The message was read aloud at the U.N. by Msgr. Antoine Camilleri, Vatican undersecretary for relations with states.

The pope’s message was sent to Elayne Whyte Gomez, president of the U.N. Conference to Negotiate a Legally Binding Instrument to Prohibit Nuclear Weapons, Leading Towards Their Total Elimination. The conference was being held at the U.N. headquarters in New York March 27-31, with a follow-up meeting June 15-July 7.

A number of nations — many of which already possess nuclear arms — were boycotting the negotiations to ban such weapons. These included the United States, France, the United Kingdom and about 40 other nations. Some continue to support the Non-Proliferation Treaty to prevent the spread of nuclear weapons and weapons technology.

U.S. Ambassador Nikki Haley told reporters in New York March 28 that it was the responsibility of leaders to keep their nations safe.

“There is nothing I want more for my family than a world with no nuclear weapons. But we have to be realistic,” Haley said.

“In this day and time, we can’t honestly say that we can protect our people by allowing the bad actors to have them and those of us that are good, trying to keep peace and safety, not to have them,” she said.

However, Pope Francis said in his message that the strategy of nuclear deterrence was not an effective response to today’s threats to peace and security: terrorism, cybersecurity, environmental problems and poverty.

“Peace must be built on justice, on integral human development, on respect for fundamental human rights, on the protection of creation, on the participation of all in public life, on trust between peoples, on the support of peaceful institutions, on access to education and health, on dialogue and solidarity,” he said.

The world needs “to adopt forward-looking strategies to promote the goal of peace and stability and to avoid short-sighted approaches to the problems surrounding national and international security,” he said.

The complete elimination of nuclear weapons is “a moral and humanitarian imperative” that should prompt people to reflect on “an ethics of peace and multilateral and cooperative security that goes beyond the fear and isolationism that prevail in many debates today.”

Making a total global ban possible will demand more dialogue, trust and cooperation. “This trust can be built only through dialogue that is truly directed to the common good and not to the protection of veiled or particular interests,” he added.

Humanity has the ability, freedom and intelligence to work together to “lead and direct technology, to place limits on our power, and to put all this at the service of another type of progress: one that is more human, social and integral,” he said.

PREVIOUS: Resentment, complaints are rooted in the sin of sloth, pope says

NEXT: Pope urges bishops from western Canada to be close to their people