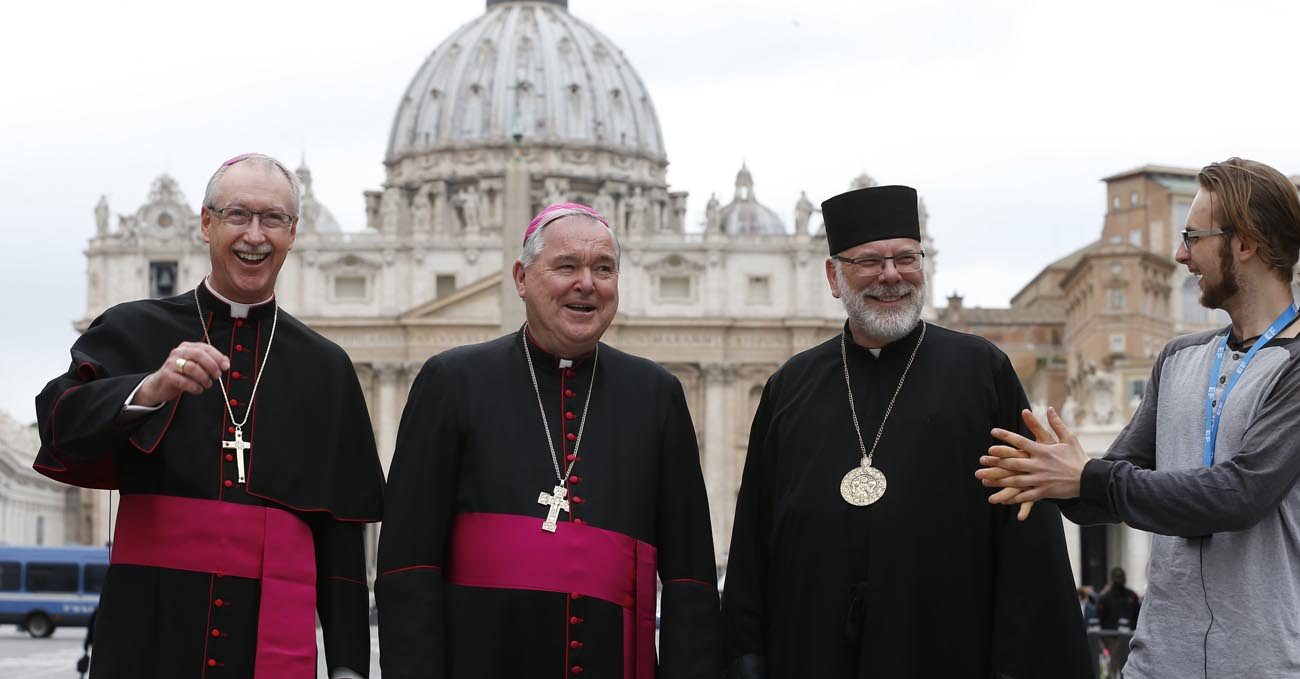 Seamus McKelvey of Winnipeg, Manitoba, crashes a group photo with Canadian bishops in front of St. Peter's Basilica March 27. From left are Archbishops Richard Smith of Edmonton, Alberta; Richard Gagnon of Winnipeg, Manitoba; and Bishop Kenneth Nowakowski of the Ukrainian Diocese of New Westminster, British Columbia. The bishops were making their "ad limina" visits to the Vatican to report on the status of their dioceses. (CNS photo/Paul Haring)

VATICAN CITY (CNS) — “That’s your bishop!” a woman shouted to Seamus McKelvey of Winnipeg, Manitoba, as he leaned in for an impromptu picture with three prelates posing for a professional portrait with St. Peter’s Basilica in the background.

McKelvey was with a large group of tourists from western Canada that just happened to be crossing the large boulevard in front of St. Peter’s Square when he decided he would crash the lineup and jump right in for his own souvenir snap with Archbishops Richard Gagnon of Winnipeg, Richard Smith of Edmonton, Alberta, and Bishop Kenneth Nowakowski of the Ukrainian Diocese of New Westminster, British Columbia. It was a prize picture with the prelates dressed in their finest, fresh from a meeting with Pope Francis March 27.

The day started “in a rather spectacular way” with an early morning Mass at the crypt at the tomb of St. Peter, followed by a two-and-a-half-hour conversation with the successor of Peter, Archbishop Gagnon told Catholic News Service.

Those two events, one after the other, would make it “a hard act to follow for the rest of the week” as the archbishop, who is president of the Assembly of Western Catholic Bishops, and another two dozen bishops from western Canada made their “ad limina” visits and pilgrimage to Rome and the Vatican.

Archbishop Gagnon said the major concerns and issues the group brought to the table for discussion included the Catholic Church’s relationship with the indigenous people and how to minister to them in their communities. For example, the decline in religious vocations means that diocesan bishops “need to integrate more fully into that missionary mode” for indigenous peoples.

Archbishop Smith told CNS that the pope spent “a lot of time talking about immigration,” reaffirming that people from other lands and cultures “are a gift” that should be integrated. He said the pope told them, “Migration is a human phenomenon, don’t be afraid, trust in the Lord, welcome people.”

Bishop Nowakowski said the pope reminded them to listen to young people, to understand their perspectives.

When the bishops told the pope how young people are so bombarded with “so many anti-Gospel messages,” he showed deep concern and said: “Please be close to your people. Accompany, be near them” so the church can offer “the hope that comes uniquely from the Gospel,” Archbishop Smith said.

The archbishop said the pope emphasized the point that when the church listens young people, “you’re listening to reality,” and he urged them not to “confine yourselves to those in your parishes or dioceses, but reach out to those who are maybe having difficulties with the church or don’t like the church: Talk to them, listen to them and go forward with that.”

Archbishop Smith said the pope “is not afraid to say he doesn’t have immediate answers” and therefore, neither should the bishop. But that does mean there is “a need for deep, sustained prayer, because the protagonist in all of this is the Holy Spirit leading us to Christ.”

The only way to discern and accompany people properly, he said, is being “men of prayer, deep prayer, and listening to where the spirit is leading.”

“Certainly his pastoral style is such where people feel affirmed and assured that there is a listening ear,” he said.

There was “a feeling like we were talking with our brother,” Bishop Nowakowski said.

Archbishop Gagnon said Pope Francis left them with a strong message of not giving up, despite the challenges.

The pope also reaffirmed the need for “a collaborative approach, understanding where people are coming from and knowing, at the same time, that clear decisions need to be taken on certain issues” that underline church teaching, Archbishop Gagnon said.

Archbishop Smith said this approach was particularly timely at this moment in history when outlooks, technology and culture are changing so quickly and “very often catching us all off guard.”

It shows “discernment is exactly what has to be done” for the church “to respond with clarity with the Gospel,” he said.