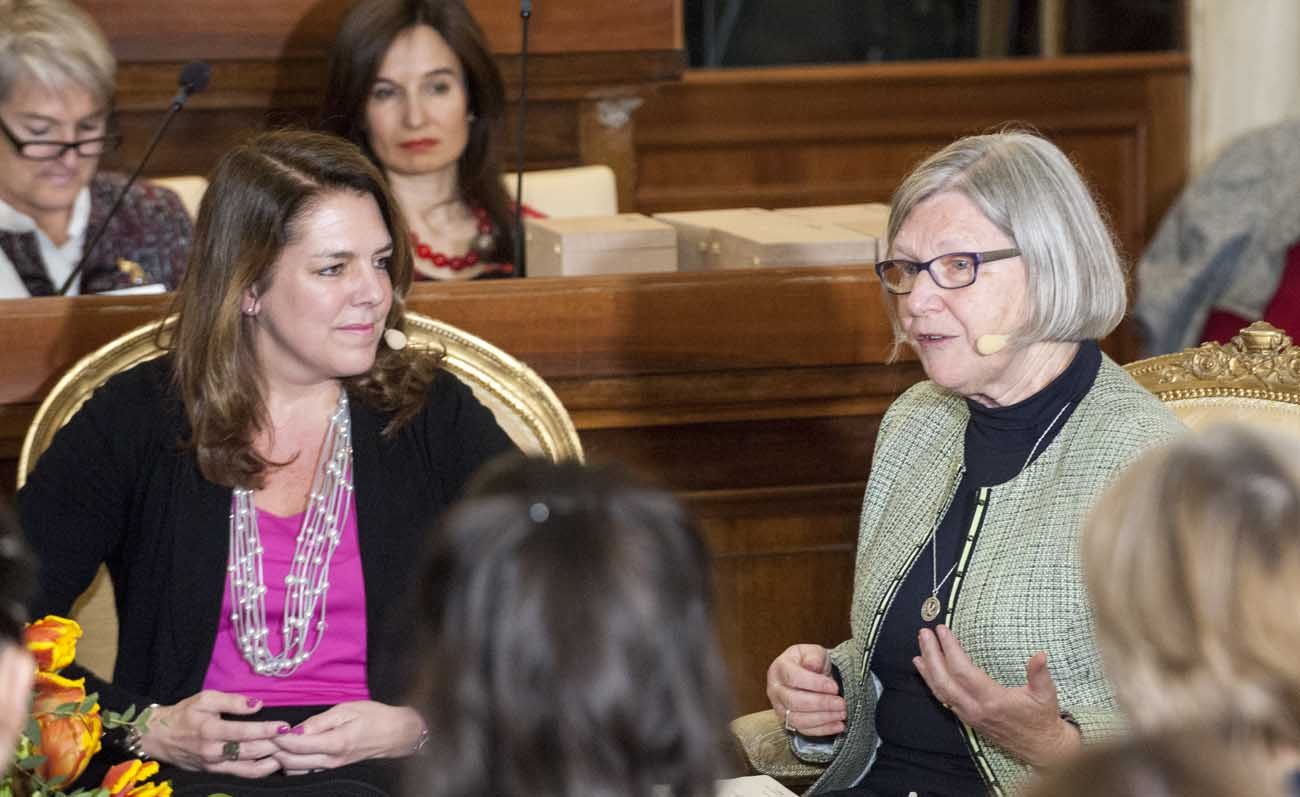 Kerry Alys Robinson and Sister Simone Campbell, a Sister of Social Service, speak during the Voices of Faith gathering March 8 at the Vatican. The event, held on International Women's Day, had the theme "Stirring the Waters-Making the Impossible Possible." (CNS photo/Massimiliano Migliorato, Catholic Press Photo)

VATICAN CITY (CNS) — Women and men from around the globe gathered for an event inside Vatican City that celebrated and encouraged the need for women’s voices to be heard in the church and in the world.

The annual Voices of Faith conference was held March 8, coinciding with the celebration of International Women’s Day.

According to its website, the Voices of Faith event “provides what has been a notably absent — the voices of Catholic women and their capacity to exercise authority within and outside the church and faith that emerges not from abstract theological ideals but in confronting the reality of the poor.”

The event featured several guest speakers, including Dr. Mireille Twayigira, a survivor of the Rwandan genocide, and twin sisters Nagham and Shadan, whose last name was not given; the two are refugees from Homs, Syria, who work with Jesuit Refugee Services helping others forced to flee violence in their homeland.

Jesuit Father Arturo Sosa Abascal, superior general of the Society of Jesus, said in the opening address for the conference, that women and men of faith need to stand together in today’s difficult political and social climate.

Faith, he said, gives the audacity “to seek the impossible, as nothing is impossible for God.”

The participation of women is also necessary in positions of leadership, especially in areas of conflict such as the Central African Republic, South Sudan and Colombia, he said.

While it is “hard to imagine peace, can we have the audacity to dream to bring peace to these countries?” he asked.

Among the examples of the need for the voice of women in the political spectrum, Father Sosa cited German Chancellor Angela Merkel who “has been the most courageous and visionary leader in Europe.”

“She had the compassion to look at those who were in need and the vision to see that they would make a contribution to Germany and Europe,” he said.

He also cited the example of Ellen Johnson Sirleaf, president of Liberia, for bringing peace and reconciliation “to her war-torn country in a way that for most men would be impossible.”

Although Pope Francis has voiced his support for broader participation of women’s voices in the decisions of the Catholic Church, Father Sosa acknowledged “that the fullness of women’s participation in the church has not yet arrived.”

“We have to work harder to develop a profound theology of women,” he said. However, their “inclusion — which will bring the gift of resilience and collaboration — remains stymied.”

Among the presenters at an afternoon panel discussion was Sister Simone Campbell, a Sister of Social Service and executive director of Network, a Catholic social justice lobbying organization that sponsored the “Nuns on the Bus” tour in the United States.

Sister Campbell explained it was “essential for women to work for peace” and social justice, particularly for the poor and the marginalized, and she praised Pope Francis’ efforts to bring their plight to the forefront of Catholic social teaching.

Highlighting four virtues young women need to make their voices heard, Sister Campbell said that joy and a holy curiosity to “listen, ask questions and learn from others” was important.

She also encouraged women to engage in “sacred gossip,” explaining the need to share the stories they have learned from others so that those stories “can multiply” in others.

Finally, Sister Campbell also called on women to pray so that they discover what their role is within the body of Christ.

Recalling a moment of prayer, Sister Campbell said she “realized that my role is to be stomach acid in the body of Christ.”

“That is because I’m called to nourish, to break down food, release energy. But I can be toxic in large quantities so I need to be contained. But if we each do our part, then the body is whole and it all gets done. So, I urge you to do your part,” she said.

NEXT: Hear no evil: How culture of resistance may hinder child protection