With new website, Franciscans opt for their own ‘hip-hop’ style 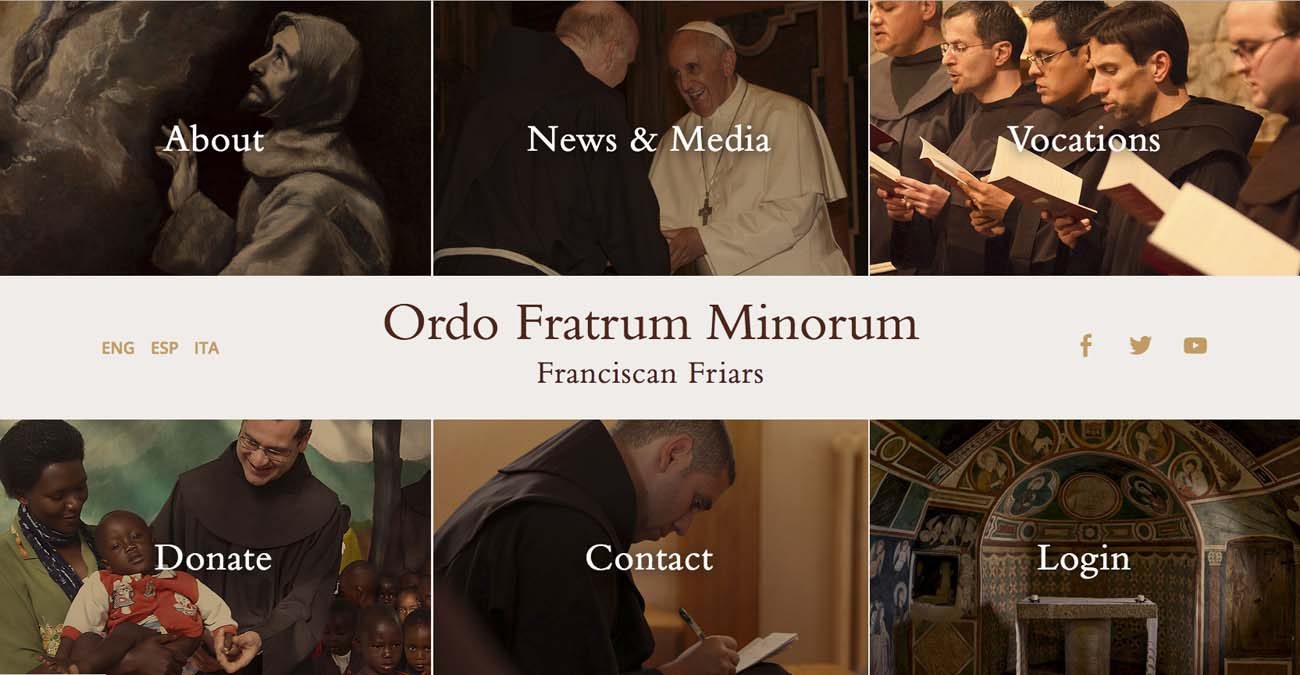 This is a screen grab of the new revamped website for the Franciscans, www.ofm.org. Father Michael Perry, minister general of the order, said the March launch of the website is just phase one of a comprehensive project that will include opportunities for the public to interact with the friars and for the friars to reflect formally on how, when and why they communicate. (CNS/Franciscans)

ROME (CNS) — The head of the Franciscans hopes the order’s new website will have a certain “hip-hop” style — being very modern or “hip” and inspiring people to move, act or “hop.”

Franciscan Father Michael Perry, minister general of the order, said the March launch of the revamped website — www.ofm.org — is just phase one of a comprehensive project that will include opportunities for the public to interact with the friars and for the friars to reflect formally on how, when and why they communicate.

The Franciscans decided their website needed a radical redesign because “we discovered we were communicating only to ourselves and not to the world,” Father Perry told Catholic News Service.

“Reading the signs of the times” means not simply acknowledging a problem, but doing something about it, he said. So the friars engaged Longbeard Creative, a Canada-based digital design company, to help them move the website into the modern age and respond to the Franciscans’ obligation to share the Gospel.

“We see this as a continuity with what St. Francis and the early brothers did,” he said. “Whenever they came across a need, when they saw a boundary, they decided they had to cross it, they had to respond,” otherwise they would be “limiting the possibility of God’s grace in their lives and the offer of God’s love for the world.”

A sleek, mobile-friendly website is not out of place for a group of mendicant friars. St. Francis and his brothers always looked for “new tools to communicate a message in a new way,” the minister general said. “He wasn’t simply repackaging old material, he was picking up things as he went along” and sharing the Gospel in ways the people he met would understand.

“I think he felt also that he needed to learn new things,” which is what the friars need to do as well. “We need to ask ourselves: ‘What is it that the world is telling us? What is this new technology offering us? What prospects and challenges does it bring? Is it really offering humanity a greater step toward a deeper experience of itself as human? Is it bringing people together, is it crossing divides, or is it creating new spaces where people feel even more isolated?'”

As time goes on, Father Perry said, the Franciscans will expand the website in response to users’ needs and interests, but also in the areas the friars believe they have something particular to offer to the world. Obviously, that will include “environmental ethics” and offering small “formation packages” on safeguarding creation, spirituality and prayer.

Many people visit www.ofm.org looking for information about St. Francis — a search term with increased popularity since the election of Pope Francis, “this person who’s a Jesuit who’s now converted to become a Franciscan,” Father Perry said with a smile. Traffic increased again when Pope Francis titled his encyclical on the environment “Laudato Si’,” quoting St. Francis of Assisi’s canticle of praise and thanksgiving for the gifts of creation.

The second thing visitors want is help with their spiritual lives, he said, “something that can help them try to … ‘mind the gap'” between the challenges of their daily lives and their faith in God.

The Franciscans want the new site to be attractive, substantive, thought-provoking and help people feel connected. But perhaps not always, Father Perry said.

Legend holds that St. Francis of Assisi spoke with the birds, but his successor as head of the order does not even Tweet. “People do not always have to be ‘on,'” he said. “We need perhaps to propose ways people can do a moratorium” on constant media use, so that they can pray and contemplate.