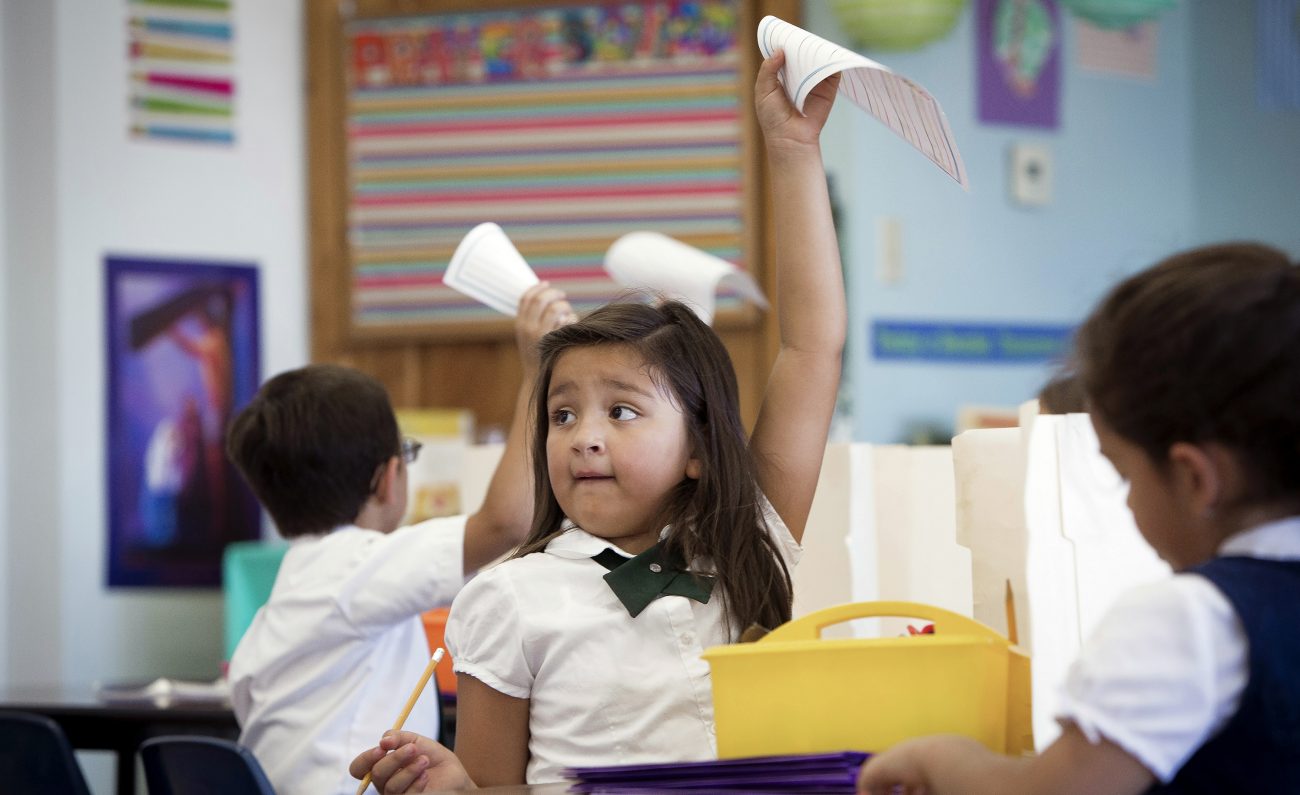 First-grade students finish an assignment at St. Ambrose Catholic School in Tucson, Ariz., in this 2014 photo. Arizona will expanded its school choice program to all students by 2021. (CNS file photo/Nancy Wiechec)

PHOENIX (CNS) — The Arizona Catholic Conference hailed the expansion of an Arizona school choice program that will allow any kindergarten through 12th-grade student to use state funds to pay for private school or other educational expenses.

“Yesterday was a historic day for school choice in Arizona as we furthered our reputation as the national leader in school choice!” said the conference in an April 7 statement after Gov. Doug Ducey signed S.B. 1431.

The legislation will make the Empowerment Scholarship Account program, or ESA, open to all Arizona students by the 2020-2021 school year.

The Arizona program will be the most comprehensive of its kind in the U.S.

“Because Arizona courts have already determined this program is legal, it will be the first program of its kind to be available to all children in a state,” said the Goldwater Institute, a Phoenix-based public policy think tank and advocate for educational choice initiatives.

Parents who participate in the program receive 90 percent of what the state would spend on a student’s public school education in a special account. The funds can be used for a child’s education at private schools, including those run by churches, for online education, private tutoring or future educational expenses.

About 3,300 Arizona students have been enrolled with an ESA account during the 2016-2017 school year. The greatest participation is in the Tucson Unified District with 305 ESA students.

The expansion law caps the number of new enrollees each year to a half percent of the total number of students enrolled in public school districts and charter schools.

He said the number of Catholic school students utilizing the scholarship accounts is lower because the program is new and had been available to only certain students.

The Phoenix and Tucson dioceses currently have 562 students with the accounts in Catholic schools, Johnson said.

Critics of expanding the scholarship account program said it will hurt public schools by siphoning more funds from them. They said it will only benefit the wealthy, who could secure state tax dollars to pay for private schools their children are already attending.

Opponents also pointed to a 2016 state audit of the program that identified misspending by the scholarship program — more than $102,000 was misused between August 2015 and January 2016.

The Arizona Catholic Conference is the public policy arm of the bishops of the state’s dioceses of Phoenix, Tucson and Gallup, New Mexico, and the Byzantine Catholic Eparchy of Phoenix. Parishes in northeastern Arizona are part of the Diocese of Gallup.

NEXT: Catholic advocates urge feds to suspend deportation of mother of four