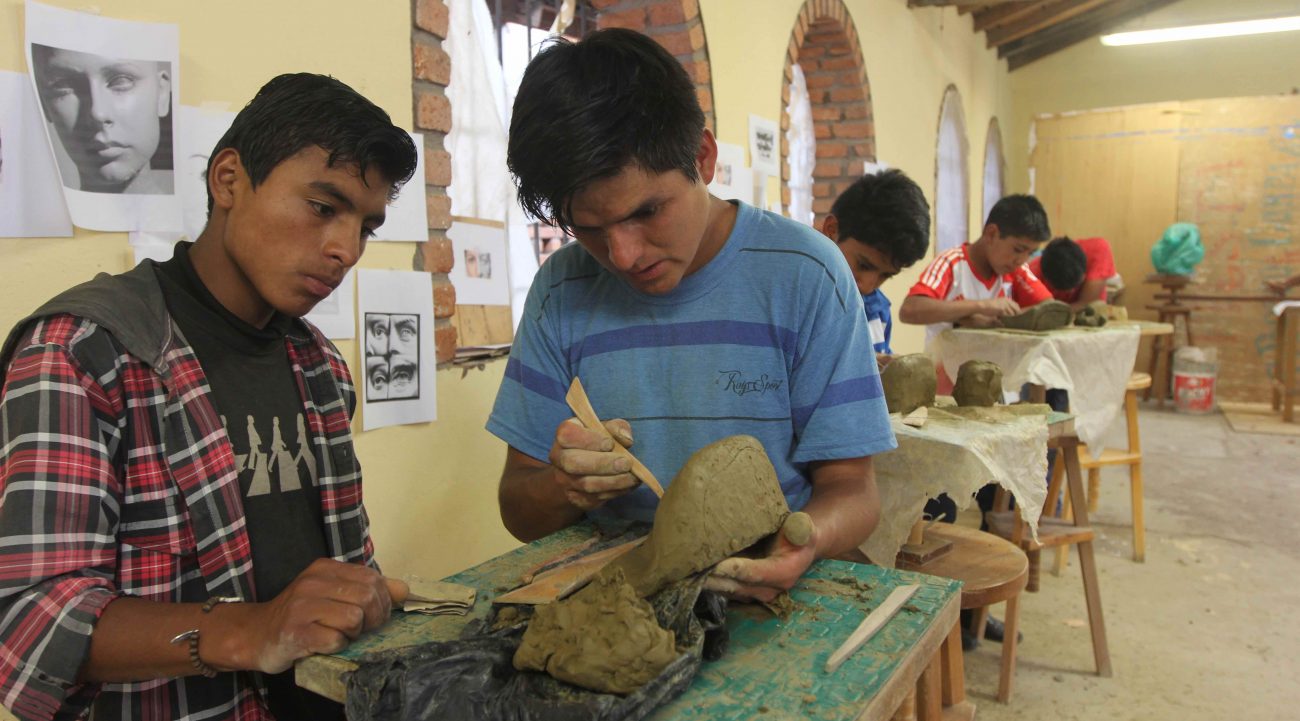 HUARAZ, Peru (CNS) — A grim-faced Pontius Pilate stares straight ahead, while Jesus, bound with rope, stands beside him, head down. Jesus turns a tortured face heavenward as he falls for the first time under the weight of a stone cross.

Mary places a hand on Jesus’ arm, as if beseeching, and he looks at her with compassion, but faces forward, one hand open toward whatever lies ahead. The journey toward Calvary continues, and finally a white tear glistens in Mary’s eye as she holds her son’s broken body.

Five young Peruvian stone carvers have spent the past year fashioning the life-size Stations of the Cross from six-foot-tall blocks of Italian marble for a parish in the United States.

The figures, which went on exhibit April 8 at the cathedral in this Andean city, will eventually be shipped to Las Vegas to become part of a prayer garden at Holy Spirit Catholic Church, the newest parish in the Las Vegas Diocese, which is expected to be completed in early 2018.

“When we first saw the (carving of) the body of Christ placed in (the) arms of Mary, his mother, it brought tears to our eyes,” said Father William Kenny, pastor of Holy Spirit. “We were speechless. It was so powerful.”

He, the church architect, a deacon and the two laymen’s wives had traveled to Peru to meet the artists, who are also making the parish’s altar, ambo and baptismal pool.

The stone carvers are members of Artesanos Don Bosco, a program of schools and cooperatives founded by Salesian Father Ugo de Censi in the 1970s in a village in the shadow of the snowcapped Cordillera Blanca in central Peru.

Father Kenny and his companions visited the program’s workshops and boarding schools, living with the students and the mainly Italian volunteers who support the program.

“It’s like a religious community,” Father Kenny said. “Many (of the students and artisans) came from very poor situations, and they have strong spiritual lives.” 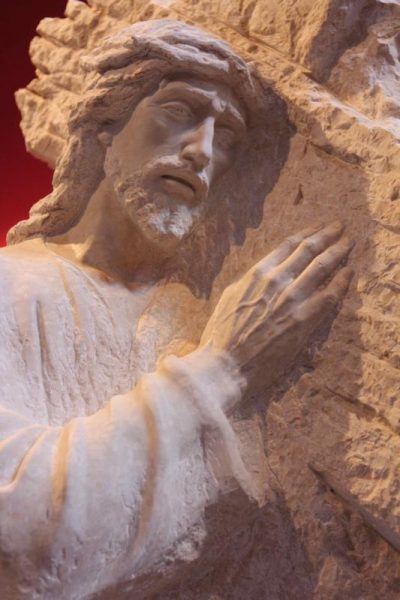 This figure of Jesus bearing the cross on his way to Calvary is part of a life-size Way of the Cross by stone carvers from the Artesanos Don Bosco in Huaraz, Peru. The statues will be installed in a prayer garden at Holy Spirit Catholic Church in Las Vegas. (CNS photo/Barbara Fraser)

For Antonio Tafur, 33, who designed all the figures and carved three of them, fashioning the Stations of the Cross has been a labor of skill and prayer.

“I like to think about what Jesus must have been like,” he said, looking at the agonized, upturned face of the figure of the fallen Jesus. “There is passion, there is love, there is mercy.”

As Jesus cries out to his father, there is also a sense of abandonment — an emotion Tafur has also known. His parents separated when he was young, and he spent his early years living with his mother, who worked long hours to support her family.

By the time he was a teenager, he was on a dangerous path shared by many young people in rough, low-income neighborhoods in Lima, Peru’s sprawling capital.

“In Lima, I did stupid things,” he said. “Sometimes I skipped school. I partied.”

When he was 13, his father took him to spend two months in his (father’s) hometown of Chacas near Huaraz, where Tafur joined the Don Bosco “oratorio,” a group of young people who met to pray, reflect and help others. Although they were poor, they learned to find joy in serving those needier than themselves, he said.

Instead of returning to Lima, he was invited to enter the Artesanos Don Bosco school, where he learned his craft along with mathematics, literature and other academic subjects.

On weekends, he and his classmates helped elderly villagers, cutting firewood, tending their fields or repairing their houses.

That is part of the rhythm of prayer, study, work and rest that marks life in the schools, which become like families for the students, said Dario Chiminelli, 43, an Italian volunteer who manages the school and workshops in a village just outside the town of Huaraz, in Peru’s central Ancash region.

Each student chooses a specialty — carpentry, stone carving, mosaics, glass working, weaving or painting — and receives a set of professional tools at graduation. Some strike out on their own, while others, like Tafur, join one of the cooperatives operating in rural parts of Peru.

Father de Censi’s vision for Artesanos Don Bosco was to enable young people to earn a living in their home villages, near their families, instead of migrating to Lima or other large cities to seek work, Chiminelli said.

In Italy, he and other volunteers did odd jobs and recycled discarded items to earn money for the program’s outreach work in Peru and programs in Brazil, Bolivia and Ecuador. A similar group has formed in Baltimore.

Volunteers who choose to serve in South America receive room and board, but no stipend, and they pay their own travel expenses, he said. All the funds they collect go to help those most in need.

“Each place is like a hub,” Father Kenny said of the workshops he visited, where poor local residents can also get meals and other assistance.

“It’s a whole spiritual community,” he said. “They seem very happy, and obviously they all have bright futures in their profession.”

NEXT: Arizona governor lauded for signing bill to expand school choice in state