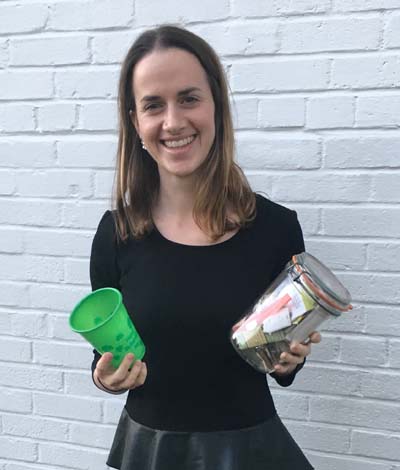 Jane Crosby stands outside her home in Springfield , Va., April 17, holding all the trash she produced during the month of March.(CNS photo/Zoey Maraist, Catholic Herald)

SPRINGFIELD, Va. (CNS) — The trash Jane Crosby generated during the month of March fits into the palms of her hands.

Minus the green cup she drank from at a friend’s St. Patrick’s Day party, the receipts, bandages and other nonrecyclable scraps of plastic and paper easily fill a liter glass jar, her version of a trash can.

Crosby is a member of the growing zero waste movement, an effort to live a more practical and environmentally friendly life. To be virtually trash free, the parishioner of St. Bernadette Church in Springfield composts her food waste and recycles a little. But mostly she relies day to day on reusable products such as Mason jars, cloth napkins and canvas shopping bags.

At the heart of the undertaking is a desire for a more just economy.

“Products are created basically to break or be thrown away,” Crosby said. “Nothing’s really designed the way it used to because we have such cheap production (costs).

“The whole goal of the zero waste movement is to move from a linear economy back to a circular economy. Products are created to last, they’re built with sustainable materials but also material that can be reused or repurposed or recycled when the life of the product is over,” she explained.

Before using time and money to purchase something, zero wasters, as they are known, make sure they need the product. They shop secondhand, try to repair what they already have and share with their neighbors. “Buying something new should be at the bottom of the list,” Crosby said. Even then, she will look at who made the product, under what conditions and with what materials.

For this reason, most zero wasters eschew plastic items, especially single-use plastics such as straws and disposable cutlery.

“(Plastic is) cheap, it’s made from oil and it never breaks down,” Crosby added. “Most of it’s not recycled even when it goes to recycling. Plastic is ugly, anyway. It’s convenient, but in general, glass or metal makes for a more beautiful home.”

Crosby’s journey to zero waster began when she picked up Bea Johnson’s book,” Zero Waste Home.” At the time, Crosby had relocated to northern Virginia after graduating from Franciscan University of Steubenville in Ohio. Although she knew it would be difficult to change her consumer habits, she took on the challenge. At the same time, she was struggling to practice her faith. Her new environmental interest brought her back to the church.

“The whole transition required a lot of stretching and change and rethinking, but I was so excited about it that it didn’t seem hard, and I realized that’s how faith could be,” she said. “As I did more research, I discovered care for the planet is a social justice issue that is important for every Christian and every Catholic.”

Now, a composting apparatus she made with her brother sits in her backyard next to a freshly planted garden. She purchases bulk food, fresh baked goods and produce in her own bag or bins. Neat rows of refillable glass jars line her pantry. It has taken time to phase out everything from plastic-wrapped food to beauty products, but she knows her efforts keep heaps of plastic from surfacing in the ocean or piling up in a landfill.

Over time, Crosby has realized that the occasional use of disposable items is unavoidable in today’s world. But it doesn’t give her the “trash-guilt” it once did. “Like faith, it’s like a journey,” she said. “It’s not always going to be perfect.”

Betsy Zolper, a geologist and the co-chair of the Care for Our Common Home team at St. Mark Church in Vienna, Virginia, recently began her zero waste journey. She has grown accustomed to the questions she gets when she brings her own containers to the deli counter and the sidelong glances when she takes out her own utensils to forgo plastic cutlery.

Co-chair Annette Kane remembers when zero waste was not a trend, but a simple fact of life. As a child during World War II, “you used everything over and over,” she said. Kane often took old food to the compost heap in her family’s backyard. Products typically were sold in paper or cloth sacks.

“I remember when plastic began being used for various containers. My mom washed them all out and had them in the laundry room drying,” she said.

The St. Mark environmental ministry formed this year after a group of parishioners finished studying Pope Francis’ encyclical ‘Laudato Si’, on Care for Our Common Home.”

“(I started) to pause and think, how are my actions making the world a better place or degrading the world?” Zolper said. “(God) created everything and when you degrade something that’s been given to you, you’re not in union with God or your fellow man.”

Maraist is a staff writer for the Arlington Catholic Herald in Virginia.

NEXT: Cardinal Dolan slams DNC pledge to back only pro-abortion pols