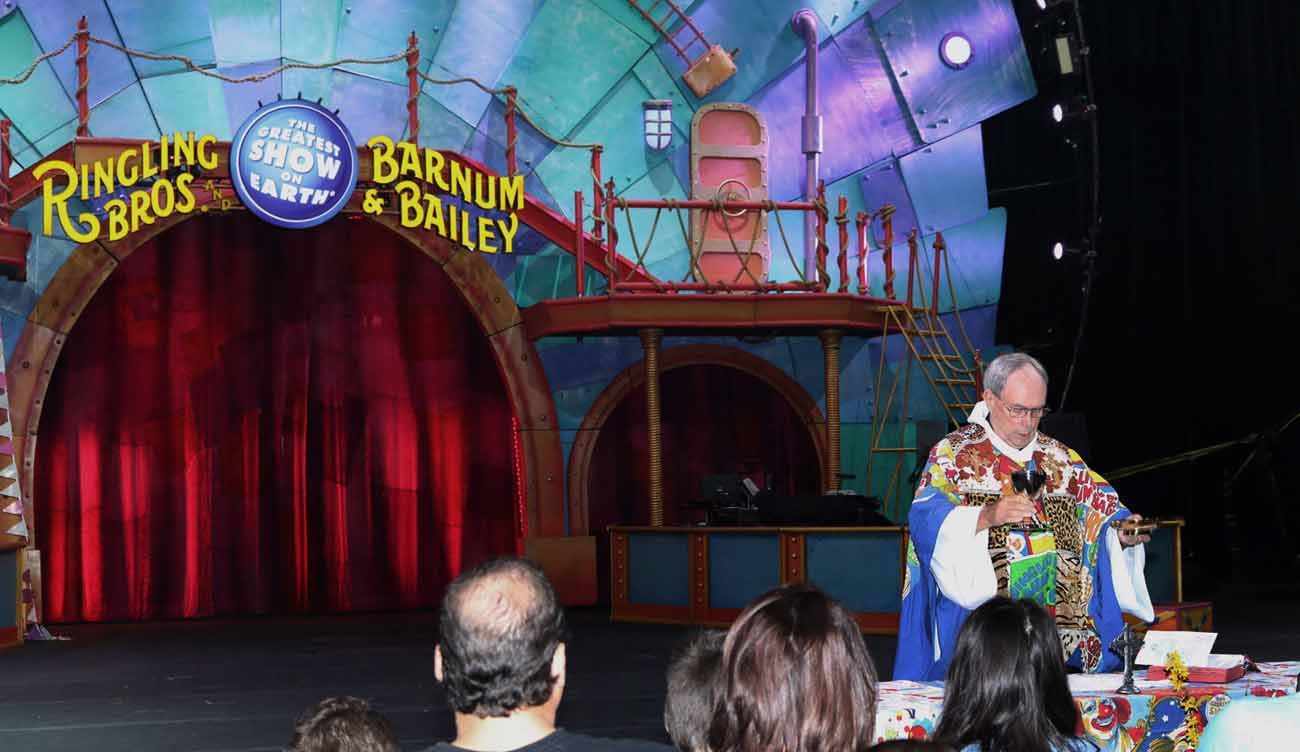 WORCESTER, Mass. (CNS) — The congregation, numbering about 50, gathered for their last Easter Mass together on the DCU Center’s arena floor.

The chaplain, Father George “Jerry” Hogan, borrowed one of their colorful boxes to use as an altar. The altar cloths and his chasuble sported circus images. Costume designers had sewn pieces of old elephant blankets together to make his stole.

The backdrop suggested the reason for such an unusual liturgical environment: The Ringling Bros. and Barnum & Bailey Circus had come to town to offer shows on Good Friday, Holy Saturday and Easter Sunday.

But it isn’t all “fun and games” for performers and other circus workers, some of whom attended the Mass before the Easter shows. While “they’ve always performed during Holy Week,” they are now going through the paschal mystery themselves, Father Hogan told The Catholic Free Press, newspaper of the Diocese of Worcester.

The Ringling circus was nearing the end of its 145-year run and the workers, including frontline performers, were in a quandary about their future. They learned Jan. 14 that the circus was closing.

Father Hogan, who has been national circus chaplain for 24 years after being appointed by the U.S. Conference of Catholic Bishops, recalled the anguish of the workers when they learned of show’s fate just hours after he celebrated Mass for them in Orlando, Florida, where they were performing.

His cellphone “went wild” at his winter home in Sarasota, Florida, where he ministers at St. Martha Parish, the national circus church, as shocked circus workers called him with the news they received: “We’re closing.” The 145th edition of “The Greatest Show on Earth” would be its last.

The priest of the Boston Archdiocese had to ask himself, “How can I help these people?”

Over the years, Father Hogan has dealt with five circus tragedies, three of which included fatalities, he said, but this was different.

“First of all, you’ve got to deal with your own feeling, because you become numb,” he said. Then you have to look past that to what God is calling you to do. It’s more than hearing; it’s listening, being physically present.”

Such tragedies affect not only those who get hurt, and their families and co-workers, but the managers and owners too, he said.

The same is true with the circus closing.

“He’s a very good businessman,” Father Hogan said. “He didn’t want to close. This is tough for him, too.”

Reasons cited for the closing included costs, declining attendance and battles with animal rights groups. Employees were to be helped with the transition.

Ringling’s Red Unit and Blue Unit each have at least 300 employees, about 100 of whom are performers, Father Hogan said. The circus runs two different shows simultaneously, for two years each, performing in various cities.

Worcester was one of the last stops for the Red Unit, which was to perform its final show in Providence, Rhode Island, May 7. The Blue Unit’s final show is May 21 in Uniondale, New York.

“I will be with you all week in Providence,” Father Hogan told Red Unit workers at the Easter Mass. “You’ll grow. It’s not the end of the world. You’ll be able to survive this.”

In his homily, he told circus employees, “Easter is a time to celebrate Jesus’ rising from the dead,” and to celebrate with family.

There had just been an Easter egg hunt for the children who travel with their parents, Father Hogan said. When old enough, they often perform, too. Some families have been in one circus or another for generations.

Some performers from abroad are far from loved ones. During the intercessions, Father Hogan offered an intention for “all your family and relatives who you can’t be with because you’re working.” He asked that God would watch over the people in the Red Unit in this time of transition, and also prayed for the Blue Unit.

He likened his listeners to the beloved disciple in the Gospel, who was reflecting on what was important that first Easter. He acknowledged that the circus workers’ life is totally changing and they may wonder, “How am I going to move from this show?”

“This is a time to really talk to the Lord in prayer, like you’re talking to another person,” Father Hogan said. “You also have to listen. … Be open to that experience.”

A silver lining Father Hogan sees in the dark times people are experiencing is the reception of sacraments in Uniondale several days before the final show. He said a baby is to be baptized, 12 children are to receive their first Communion, five adults are to be confirmed and one is to be received into the church.