Georgetown University, Jesuits apologize for roles in sale of slaves 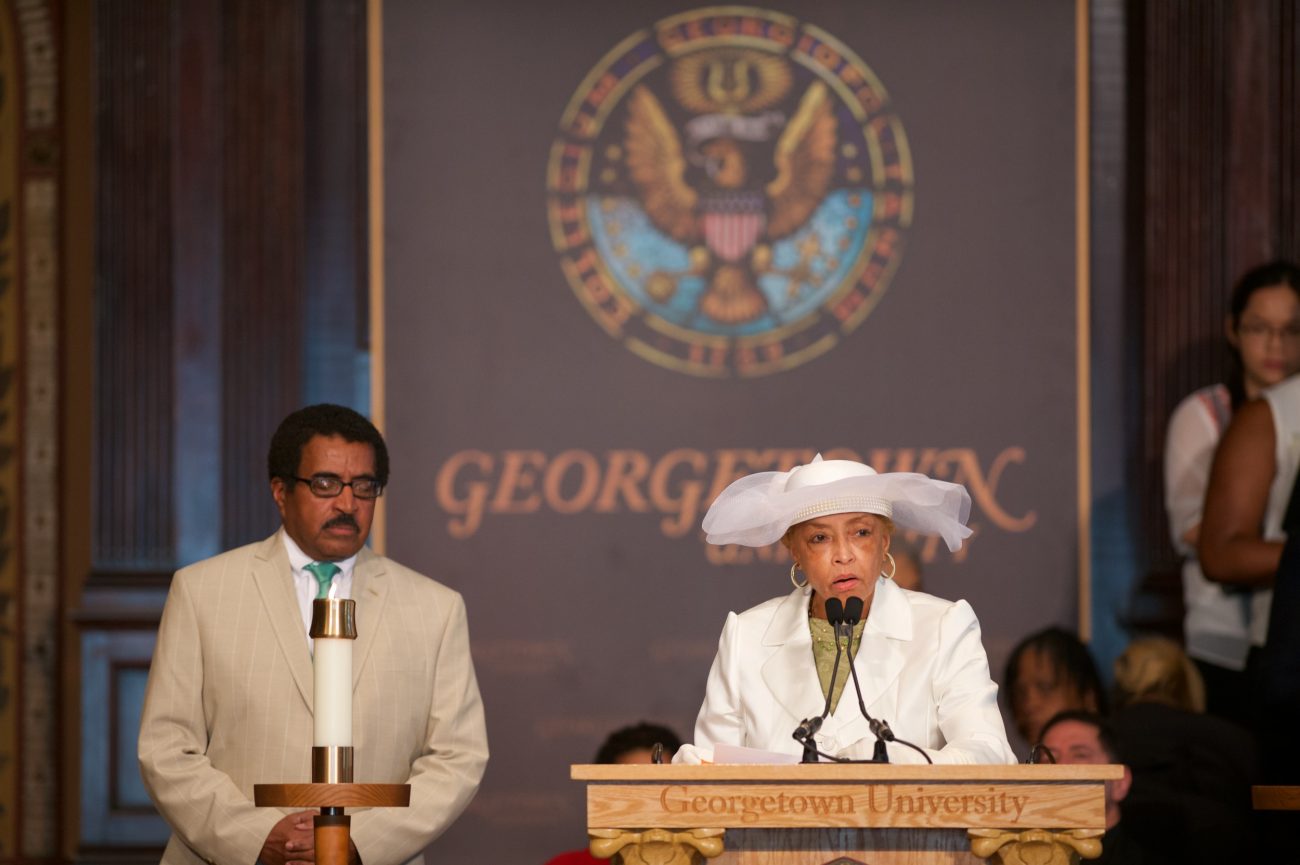 Onita Estes-Hicks, and her nephew, the Rev. Leroy Baker, descendants of the Butler family line, offer a reading from Isaiah during an April 18 "Liturgy of Remembrance, Contrition, and Hope" at Georgetown University in Washington. (CNS photo/Georgetown University)

WASHINGTON (CNS) — Georgetown University and the Society of Jesus’ Maryland province apologized April 18 for their roles in the 1838 sale of 272 enslaved individuals for the university’s benefit.

More than 100 descendants attended a morning “Liturgy of Remembrance, Contrition and Hope” that the university created in partnership with descendants, the Archdiocese of Washington and the Society of Jesus in the United States.

“Today the Society of Jesus, who helped to establish Georgetown University and whose leaders enslaved and mercilessly sold your ancestors, stands before you to say that we have greatly sinned,” said Jesuit Father Timothy Kesicki, president of the Jesuit Conference of Canada and the United States, during the liturgy. “We pray with you today because we have greatly sinned and because we are profoundly sorry.”

The event took place the day after the District of Columbia marked Emancipation Day, which celebrates the emancipation of slaves in Washington April 16, 1862. This year, the local holiday was moved to April 17 because the actual day fell on Easter Sunday.

In early April, Georgetown announced plans for the liturgy and a renaming ceremony for two buildings on campus previously named for priests who sold women, children and men into slavery for financial gain in 1838.

Jesuit Father Thomas Mulledy, as Georgetown president, authorized the transaction, and Jesuit Father William McSherry also was involved in the 1838 sale and in other slave sales.

Mulledy Hall was renamed after Isaac Hawkins, the first enslaved person listed in the sale documents. McSherry Hall is now named after Anne Marie Becraft, a teacher and free woman of color who established one of the first schools for black girls in the District of Columbia. She later joined the Oblate Sisters of Providence.

Sandra Green Thomas, a descendant of the slaves and president of the GU272 Descendants Association, spoke at length at the liturgy about the 272 enslaved people, her ancestors and her Catholic faith.

“The ability to transcend the realities of this life in this country has been a necessary tool in the survival kit of my people,” she said. “For the 272, I believe that their Catholic faith enabled them to transcend. No matter how incongruous their existence was with the gospel of God’s love and protection, they clung to their faith.”

President John J. DeGioia of Georgetown also spoke during the liturgy, saying that “slavery remains the original evil of our republic.”

The university “was complicit in” that evil, “a sin that tore apart families,” he said. “Through great violence, (it) denied and rejected the dignity and humanity of our fellow sisters and brothers. We lay this truth bare — in sorrowful apology and communal reckoning.”

Jesuit Father Robert Hussey, provincial of his order’s Maryland province, and DeGioia met with descendants in the afternoon.

Karran Harper Royal, another descendant, thanked Georgetown for its steps toward acknowledging its ties with slavery, particularly the students who took their concerns about the university’s history to the administration in 2015.

“The actions of Georgetown students have placed all of us on a journey together toward honoring our enslaved ancestors by working toward healing and reconciliation,” she said. “Our history has shown us that the vestiges of slavery are a continuum that began with the kidnapping of our people from our motherland to keeping them in bondage with the brutality of American chattel slavery, Jim Crow, segregation … the school-to-prison pipeline and the over-incarceration of people of color.”

Other events included opportunities for members of the descendant community to connect with one another and with Jesuits through a private vigil the evening of April 17, a descendant-only dinner April 18 and tours of the Maryland plantation where their ancestors were enslaved.

DeGioia and other university officials have met with some descendants of the slaves on various occasions and they have had access to historical materials regarding the sale of their relatives.

Some of the families sold included adults and children the Jesuits had baptized. On March 12, The New York Times published a photo, the only known image, that an archivist in Thibodaux, Louisiana, found of one of the slaves sold by the Jesuits. His name was Frank Campbell and the story accompanying the photo said the slave was sold out of St. Inigoes plantation in Maryland, named after St. Ignatius. He had kept ties to the Catholic Church after gaining his freedom, the story said.

The liturgy and building rededications were recommendations of Georgetown’s Working Group on Slavery, Memory and Reconciliation in September 2016. The group, which included faculty, students, alumni and descendants of slaves, had suggested the university offer some form of reparative outreach as well as a meaningful financial commitment.

“Our work as a group was to help tear down the walls, the walls of mystery and silence and (the) unknown surrounding Georgetown’s historical ties to the institution of slavery,” said working group member Connor Maytnier at the dedication.

NEXT: Parish touts solar panels powered by the Son and sun