WASHINGTON (CNS) — This summer’s Convocation of Catholic Leaders comes at a time when the U.S. Catholic Church is seeking how best to respond to a changing social landscape while bringing Pope Francis’ vision for a church that offers mercy and joy to the world.

Called by the bishops, the historic convocation will find more than 3,000 Catholic leaders — bishops, clergy, religious and laypeople — meeting July 1-4 in Orlando, Florida, to focus on how the pope’s 2013 apostolic exhortation, “Evangelii Gaudium” (“The Joy of the Gospel”), applies in the United States.

The pope’s document lays out a vision of the church dedicated to evangelization — missionary discipleship — in a positive way, with a focus on society’s poorest and most vulnerable, including the aged and unborn.

Jonathan Reyes, executive director of the U.S. bishops’ Department of Justice, Peace and Human Development and a convocation planner, sees the gathering as a way for Catholics across the diverse spectrum of the church to unify in Christ.

The idea of missionary discipleship expressed by the pope has taken root in the work of the U.S. Conference of Catholic Bishops. It’s the pre-eminent theme in the 2017-2020 strategic plan the bishops adopted during their annual fall general assembly in November. 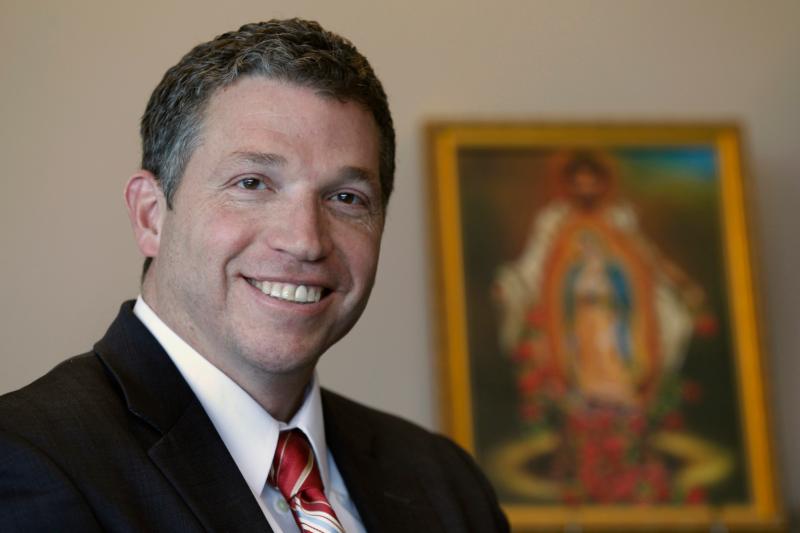 Jonathan Reyes, executive director of the U.S. bishops’ Department of Justice, Peace and Human Development, is pictured in a 2013 photo. (CNS photo/Bob Roller)

Planning for the gathering, titled “Convocation of Catholic Leaders: The Joy of the Gospel in America,” has been underway for a few years. It is being called to examine today’s concerns, challenges and opportunities for action in light of the church’s evangelization mission, Reyes explained.

“So we’re going to encounter Christ together, converse together, pray together, encounter one another and talk very practically about what are the challenges, what’s it mean to be missionary disciples at this moment and how do we go out and do it,” Reyes said.

Planners want people to mix and mingle and learn from each other during the invitation-only event.

“This group of people would never be in the same strategic conversations together if it weren’t for the bishops calling them together. They are in all kinds of ministries throughout the church. They are professionals in all the different fields, education, business, teachers. We have people from all socioeconomic groups,” Reyes said.

“So we’re going to have a conversation that could only be had by the bishops. That’s needed in this moment. I think everybody agrees we need this conversation. It’s not about the things that divide us. And the beauty is we have this document from Pope Francis, ‘Evangelii Gaudium.’ There was unity around that document when it came out, a document that opens with ‘I invited all of you to a personal encounter with Christ,’ which is right where we want to start,” he said.

Such a gathering of bishops and key church leaders has occurred just once before within the U.S. church.

In 1917, in response to the country’s entry into World War I, the bishops met with a select group of leaders to determine how to respond to social needs emerging from the war. That meeting at The Catholic University of America in Washington led to the formation of the National Catholic War Council “to study, coordinate, unify and put in operation all Catholic activities incidental to the war.” After the war, the bishops met to make the council permanent and established the National Catholic Welfare Council, the forerunner to today’s USCCB.

“They were responding to a very different crisis, World War I. But there was a sense of the importance of the moment that the church of the United States had to come together under the bishops to find a way of going forward, a vision of hope for the country and to serve,” Reyes said.

Today, like the wider society, the U.S. church is grappling with how best to respond to rapid sociological changes: demographics including a rising Latino population and people leaving organized religion, an economy that has led to a smaller middle class, a broadening of the legal definition of marriage, polarization along ideological lines and technological advances that have changed how people relate with each other.

How to respond under the guidance of Pope Francis will begin to be discussed during the convocation. Each day has its own theme for participants to consider in light of changing church and social structures:

Mass will be part of each day as well. The July 3 Mass will incorporate religious liberty as part of the bishops’ annual Fortnight for Freedom observance.

Reyes and planners, including the bishops envision the convocation as a starting point with Pope Francis providing the inspiration through his call to bring the Gospel to others.

“The Gospel is a pretty good thing to rally around,” Reyes told CNS. “You can build a lot unity out of it.”

PREVIOUS: At ‘mother of all vigils,’ U.S. church welcomes thousands of new Catholics

NEXT: Georgetown University, Jesuits apologize for roles in sale of slaves