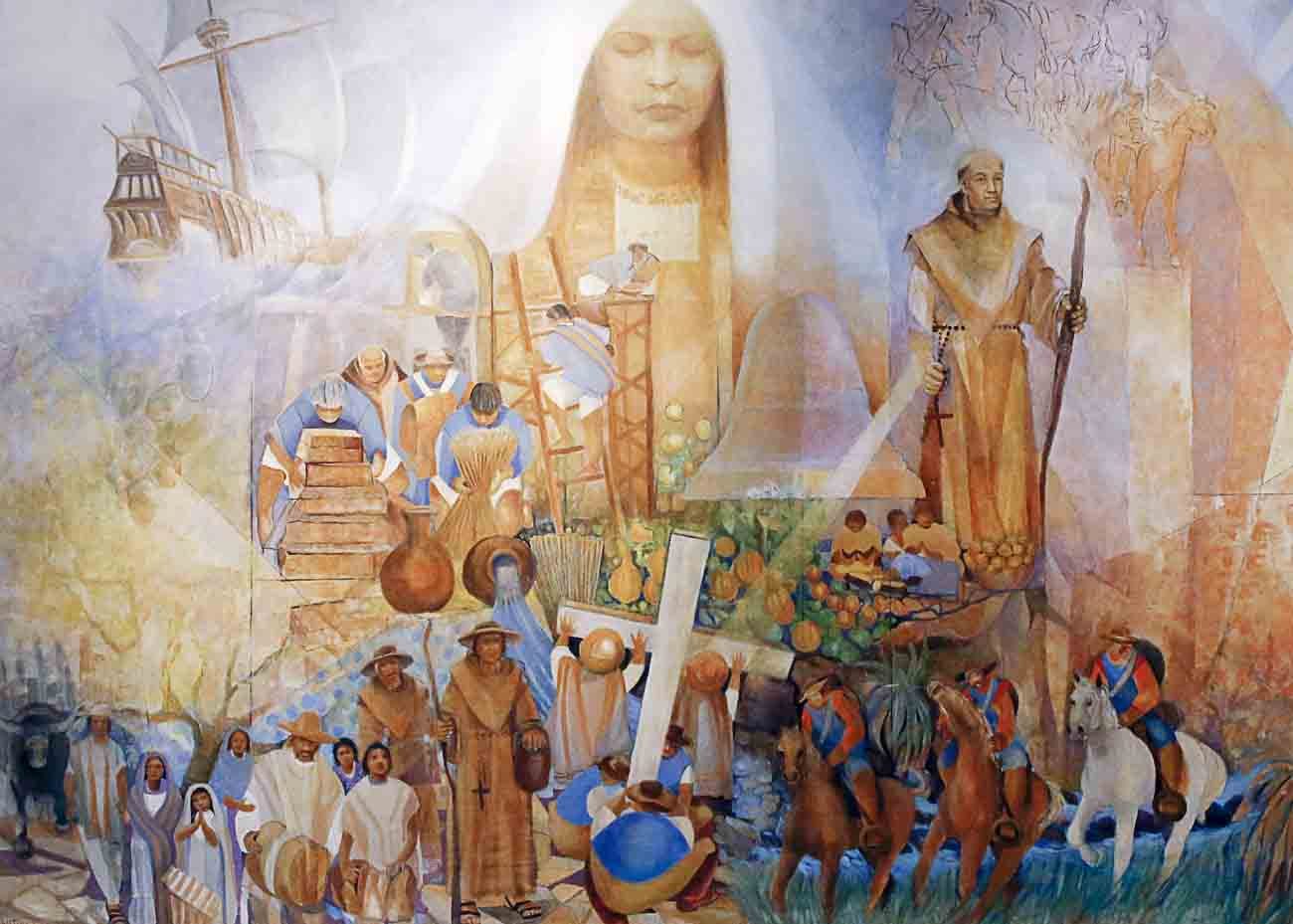 A mural depicting emerging Catholicism in North America by Frank A. Martinez greets people entering the Cathedral of Our Lady of the Angels in Los Angeles. The rendering depicts figures from early 18th-century California, including St. Junipero Serra, right, and native people building the missions and harvesting crops. The central figure at the top is Mary. (CNS photo/Nancy Wiechec)

WASHINGTON (CNS) — American Catholics will have an opportunity to become modern-day missionaries during the weekend of April 29-30 by simply dropping money in a collection plate.

That is the weekend the Catholic Home Missions Appeal is being conducted as a second collection in many parishes throughout the U.S. The money raised from it will help bring the religion to people throughout the country.

Contributing to that collection really is a way for Catholics to do missionary work without ever leaving their home or parish, said Richard Coll, director of Catholic Home Missions in the U.S. bishops’ Office of National Collections.

The annual Catholic Home Missions Appeal helps support more than 40 percent of the dioceses and eparchies in the United States and its territories in the Caribbean and Pacific.

These dioceses tend to be rural with enormous territories within their borders.

Without the subsidizes that come from the annual appeal established by the U.S. Catholic bishops in 1998, it would be difficult or impossible to support many of the religious programs in these regions or even some basic pastoral functions.

It’s why they are called mission dioceses, because they depend on missionary efforts to help bring Catholicism to these populations in a meaningful way.

A vehicle drives past a sign for St. John by the Sea Church off the main road leading to Klawock and Craig on Prince of Wales Island in southeastern Alaska. The island is accessible only by boat, ferry or seaplane. (CNS photo/Nancy Wiechec)

The theme of the appeal this year is “Strengthening the Church at Home,” Coll told Catholic News Service during an April interview.

The U.S. Catholic Church has a long history of sending missionaries to serve people in Africa, Asia, Latin America and Oceania, said Bishop Peter F. Christensen of Boise, Idaho, which is a mission diocese.

Home mission dioceses in the U.S. need the same kind of care, which is why the grants that come from the annual appeal are so vital to Catholics in the mission dioceses, which also include Gallup, New Mexico, and Little Rock, Arkansas, Bishop Christensen said.

“For many dioceses, it is challenging to support ministries because of fragile financial situations or isolated communities,” said Archbishop Paul D. Etienne of Anchorage, Alaska, chairman of the U.S. Conference of Catholic Bishops’ Subcommittee on Catholic Home Missions. “It is through the Catholic Home Missions Appeal that we can make a difference here at home and help our mission dioceses offer places for people to encounter the loving and merciful Christ.”

The Subcommittee on Catholic Home Missions in 2016 allocated more than $9 million to 84 dioceses for programs of evangelization, Hispanic ministry, seminary education, lay ministry formation and other essential pastoral ministries.

The U.S. Conference of Catholic Bishops defines a home mission as a “diocese or parish that can’t provide the basic pastoral services to Catholics without outside help.”

So, Catholics who support this collection end up contributing to the pastoral outreach in the mission dioceses in places such as Alaska, New Mexico, Idaho, the Marshall Islands, Puerto Rico and parts of Texas.

Here’s an example to put the struggles of a mission diocese into context. 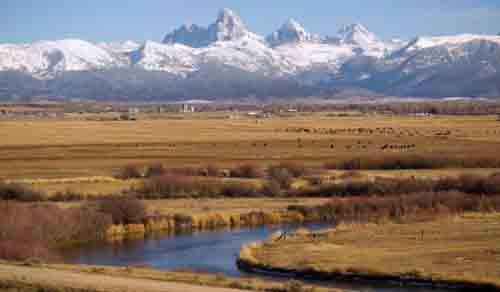 The vastness of the Diocese of Boise, Idaho, one of the nation’s home mission dioceses, is on full display in this Nov. 7, 2015, photo taken near Driggs, Idaho. (CNS photo/Chaz Muth)

Salt Lake City, one of the U.S. mission dioceses, consists of 85,000 square miles, which is the entire state of Utah, and some of the Eastern Catholic eparchies, which also are considered Catholic home missions, cover the entire U.S. and consist of millions of square miles.

Bishops, priests, deacons, religious sisters and dedicated lay ministers can put 50,000 miles a year on their cars just to reach the Catholics they are charged with providing pastoral care to, Bishop Christensen said.

The ministry of Father Adrian Vazquez, a priest in his diocese, illustrates the situation. He is charged with the pastoral care of four Catholic communities in eastern Idaho, a parish in St. Anthony and three mission stations located in Rexburg, Driggs and Island Park.

He divides his time between all those locations, driving hundreds of miles a week.

Sometimes the priest relies on the kindness of his parishioners in Driggs and Island Park to put him up for the night, since his residence is at the rectory in far off St. Anthony.

“The travel can be a real challenge, especially in the winter when there is a lot of snow,” said Father Vazquez, a native of Mexico. “My parishioners have to be patient with me sometimes if I’m running behind and we just start when I arrive.”

“The communities are small,” Bishop Burns told CNS during an interview in Juneau. “We can have just a handful of people who gather for Mass at the kitchen table, because we don’t have a chapel or church in some of our villages.”

The priests, deacons, religious sisters and lay ministers say it’s important to get into the small communities in the far reaches of these mission dioceses, not only to bring them the sacraments, but to help them prepare for marriage, strengthen their relationships, sometimes cope with poverty, mourn the dead and become positive models for their children, he said.

The U.S. mission church of the 21st century faces some of the same challenges 18th-century missionaries encountered in that the faith remains poorly established in several parts of the country, including the Rocky Mountain states, the South, areas along the Mexican border and in the Pacific islands, Bishop Christensen said. 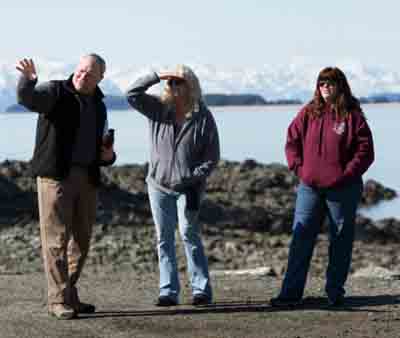 In recent years, the mission dioceses have seen an increase in religious vocations, which is desperately needed, but that too brings its own set of challenges for financially strapped institutions in those areas.

“To educate a seminarian today costs an average of $37,000,” Bishop Christensen said. “That’s not small change for a diocese that can’t support that.

“There’s a (mission) diocese in Texas that has 23 seminarians,” he said. “Multiply that out by $37,000 and that gets into some pretty amazing figures.”

PREVIOUS: Steelers chairman Rooney recalled for quiet strength based on his faith

NEXT: After shooting, Fresno Catholics urged to be a light to community