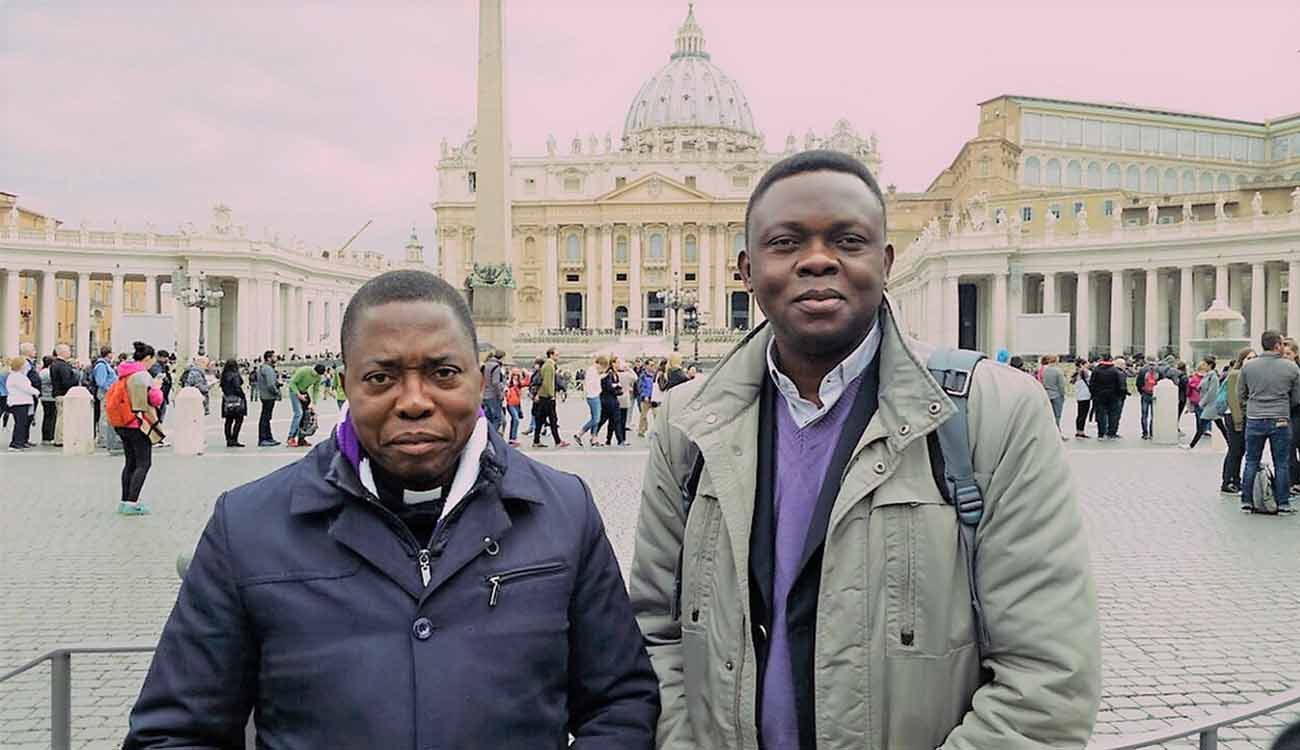 Father Richard Muembo and Father Apollinaire Cikongo are seen in Rome April 18. Global demand for metallic ores used in smartphones are thwarting efforts to end war and violence in Congo, the priests say. (CNS photo/courtesy Aid to the Church in Need)

Any person who possesses a cellphone or other electronic device with components derived from such “conflict minerals” is benefiting from bloodshed, said Father Richard Muembo, rector of a Congolese seminary firebombed earlier this year.

“Anyone who uses modern technology nowadays is in some way using the blood of the Congolese people,” he said in an interview with the United Kingdom branch of Aid to the Church in Need, a pontifical foundation helping persecuted Christians.

“Looters from all over the world come here to exploit the country,” the priest said in an April 19 statement by the charity.

Fighting in Congo is being perpetuated by a struggle over access to such ores as coltan, from which niobium and tantalum are extracted, he suggested. The ore is used in the production of batteries for smartphones, computers and GPS devices.

Catholic leaders have worked to end the violence between the government and the criminal gangs and armed groups, which sell the ores to buy arms, only to find themselves the target of attacks.

The Seminary of Christ the King, of which Father Muembo is rector, was partially destroyed in a firebomb attack Feb. 18 after church leaders refused to allow it to be turned into a military outpost.

The 77 seminarians were forced to flee the complex in Malole in the central Kasai region of the country to continue their studies 250 miles from their classrooms.

On March 31, Catholic schools were burned and the Cathedral of St John the Baptist in Luebo, near Malole, was desecrated by militia fighters.

Human rights monitors reported attacks on church properties in other parts of the country in early April.

“Schools have been closed, hunger reigns, parts of the population are hiding in the jungle,” Father Muembo said. “We dream of an end to this pointless war.”

The Congolese bishops’ conference launched a mediation bid after opposition leaders accused President Joseph Kabila of seeking to retain power when his second and final term expired Dec. 20. The bishops brokered a peace accord, signed Dec. 31. In late March, the bishops abandoned attempts to arrange a government-opposition power-sharing settlement and, within days, violence erupted in eastern Congo.

“The Catholic Church is highly respected in this country because it has never let itself be co-opted by any political group,” Father Muembo said. “Now attempts are being made to embroil the church in the conflict.”

Father Apollinaire Cikongo, a member of staff at the seminary, said: “It is necessary … to say no to violence, to the industry of death, to the arms factories and the arms trade.

“Technology should make lives easier, not end lives,” he said in the Aid to the Church in Need statement.

Western firms have been accused of working with violent gangs in Congo to obtain minerals used for producing electronic gadgets and of allowing trade in resources to perpetuate human rights violations.

In February, the chairman of the U.S. bishops’ International Policy Committee wrote to the acting head of the National Security Council urging President Donald Trump not to suspend the rules making companies declare if they used “conflict minerals.”

A 2012 Securities and Exchange Commission ruling, required by Section 1502 of the Dodd-Frank Act, does not prohibit companies from buying such minerals, but was designed to force companies to disclose the chain of custody of such minerals in an effort to keep them from helping armed groups, particularly in Congo.

According to April 20 reports in the U.S. media, House Republicans have unveiled a draft of a Dodd-Frank Act replacement, called the Financial Choice Act, and on April 26 will hold a committee hearing on the bill.