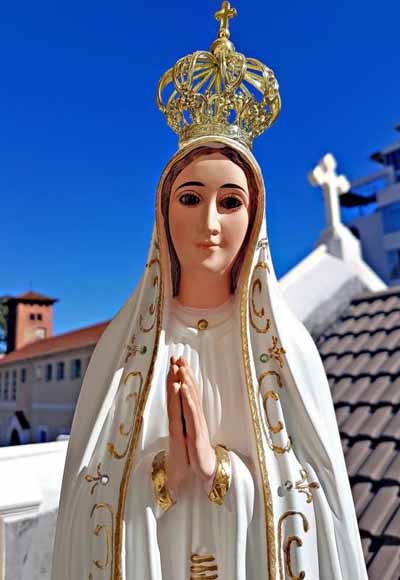 One of the more than 1,000 statues of Our Lady Fatima that retired Portuguese businessman Jose Camara has sent to parishes around the world is seen in Cape Town, South Africa. (CNS photo/Gunther Simmermacher)

CAPE TOWN, South Africa (CNS) — Every time Jose Camara thinks his ministry is completed, somebody else needs a statue of Our Lady of Fatima to spread the devotion.

Camara, a retired Portuguese businessman, has donated more than 1,000 of the statues, handmade in Fatima, to parishes around the world since January 2013. He even covers the cost of transport, including to South Africa, Madagascar, Australia and the United States.

“I started out just over four years ago with the idea of offering 12 hand-made statues of Our Lady of Fatima — one for each apostle — to parishes in South Africa, where I lived for many years,” Camara said.

In the first week after his offer was publicized in South Africa’s Catholic weekly, The Southern Cross, he received 63 applications.

“Now I have sent more than a thousand statues to parishes, schools, convents, Catholic movements, prisons and so on — and even to some individuals — all over the world,” said Camara, who now lives in Cascais, about 20 miles west of the Portuguese capital, Lisbon.

He has sent statues to more than 30 countries: throughout Africa and to the Holy Land, India, the Philippines, Australia, Great Britain, Germany, Guatemala, the United States — even to parishes in Portugal. Some of the destinations are remote, such as Reunion Island and Mauritius.

And every time he decides his task is finished, a new email reaches him from regions that need of Our Lady of Fatima.

“But I cannot continue forever,” Camara said. Apart from the expense of buying the statues and the even greater cost of having them shipped to their destination, the logistics, bureaucracy and stress about delivery are becoming a strain for a man who is “not getting any younger” and must contend with worsening health problems. And, he admits, “my life savings are almost depleted.”

For a long time, he asked to remain anonymous. He allowed the use of his name only when media that interviewed him insisted on it.

“I don’t seek any credit; I only want to serve Our Lady and the Lord,” he said.

He said he has been inspired by people he has met, such as the priest in Namibia who drove 560 miles each way to collect a statue for his parish.

The statues are handcrafted and hand-painted in a workshop in Fatima. They are various sizes and are intended for use inside the churches. In exchange for a statue, recipient parishes had to promise to recite the rosary once a month as a community, and to place the statue at an altar in the main church or in a side chapel or shrine dedicated to Our Lady of Fatima.

“I have received many e-mails with photos from parishes, schools and convents to show that they promoting the devotion. It makes me very happy to see that,” Camara said.

A woman in Cape Town, dying of cancer, wanted to be in the company of Our Lady of Fatima as she awaited death.

“Although I usually don’t donate to individuals, I sent her a statue as a personal gift. But there are always delays with customs and so on. A statue normally takes four months to arrive. It didn’t look like the statue would arrive in time, but I sent it anyway, placing my trust in Our Lady,” Camara recalled.

Four months later he received an email that the woman was on her deathbed and the statue had not arrived. From Portugal, Camara ascertained that it was at customs in Cape Town, so on a Friday afternoon the dying woman’s sister rushed to have it released and took it to the hospital.

“They took photos of the woman holding the statue, looking happy to be with Our Lady. She died the next day, 24 hours later. That was faith. I did not believe that she would see the statue,” he said.

A young girl in England who wrote to Camara “to request a statue for her daddy, who was in prison” in Kent, England.

He remembered that the Fatima visionaries — three children — were jailed for interrogation in August 1917.

So he sent a statue to the jail. “The father now prays the rosary with his fellow inmates in prison.”

“I believe real philanthropy means getting involved: taking your jacket and tie off, rolling up your sleeves and face the project — and even heavy bills. And one must be doing it not for personal glory but with love for Our Mother,” Camara said.

He paused and added: “Our Lady has been dropping blessings from above.”