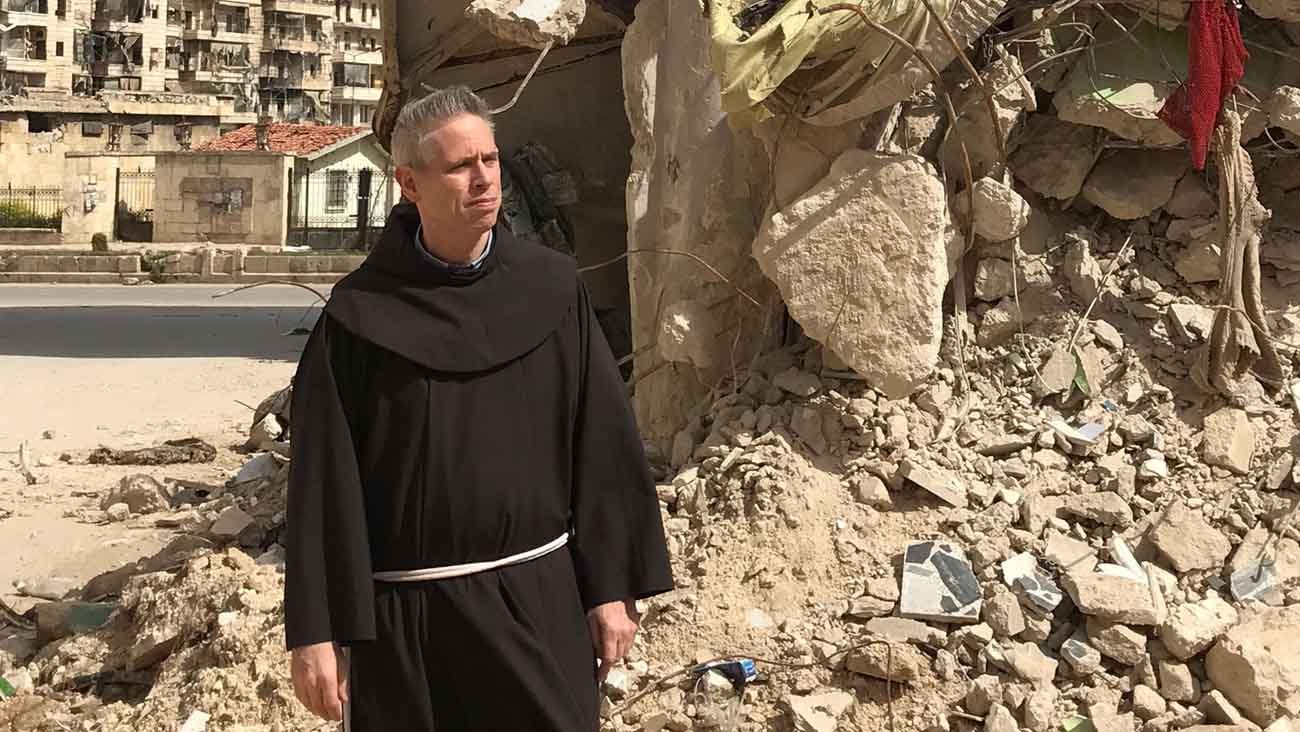 Father Michael Perry, minister general of the Franciscans, visited most of the friars the first week of April, but he could not enter areas controlled by Islamic State or by forces opposed to the government of President Bashar Assad.

He drove to Homs April 7, just hours after U.S. bombers attacked the nearby Shayrat air base in retaliation for the Syrian government’s suspected use of chemical weapons.

“We didn’t see anything, but we certainly sensed the tension,” he told Catholic News Service in Rome April 12.

In Damascus, he said, he and the other friars could hear bombing “every 20 minutes, 24 hours a day” from one of the neighborhoods controlled by opposition forces. “This was constant, a constant reminder that nothing is settled; everything is still up in the air and people feel a great deal of insecurity.”

The people just want it to stop, he said.

“We have two Franciscans who are caught (in territories) under ISIS control,” he said. “They are living in two villages, 25 and 40 kilometers from Aleppo. They have been able to negotiate space and pay what is necessary” in order to stay and help the estimated 300 families remaining. The families are made up mostly of the elderly, children and “those who are too poor or too weak to find another place to go.”

“The friars are staying with them and showing their solidarity and suffering the same conditions as the people,” Father Perry said. To be able to stay, they had to remove all crosses, pictures of saints and other visible signs that they are Christians.

“It’s a miracle they’ve been able to negotiate the space, but it’s a testimony to the perseverance and endurance of the Syrian people,” he said. Both friars are Syrians.

Father Perry began his weeklong trip in Beirut with Franciscans helping those who have fled Syria. The rest of his trip took place by car, including long detours to avoid areas controlled by Islamic State or by opposition forces.

“All along the south and eastern side to the eastern entry into Aleppo, I did not see one town that was alive,” he said. “They had all been bombed out, abandoned.”

“The closer we got to Aleppo, we saw a few people who were beginning to farm again, but we just didn’t see any signs of life, human life,” Father Perry said. “By contrast, the fields were in full bloom with poppies and different colored flowers. So it was this stark contrast of the death of humanity and nature almost saying, ‘It’s not over. Stop. It’s going to come back. There’s still hope. There’s a future even if it doesn’t look like there’s one now.'”

At a Catholic parish in Aleppo, Father Perry brought a weighty contribution to the hope professed by parishioners, the women religious, the friars and Bishop Georges Abou Khazen, apostolic vicar for the city’s Latin-rite Catholics.

Cardinal Angelo Comastri, archpriest of St. Peter’s Basilica, had given Father Perry three of the bricks used to close up the basilica’s Holy Door between jubilee years. Father Perry took one to South Sudan, one to Malaysia and the last he brought to Aleppo “as an invitation to dialogue, reconciliation and rebuilding.”