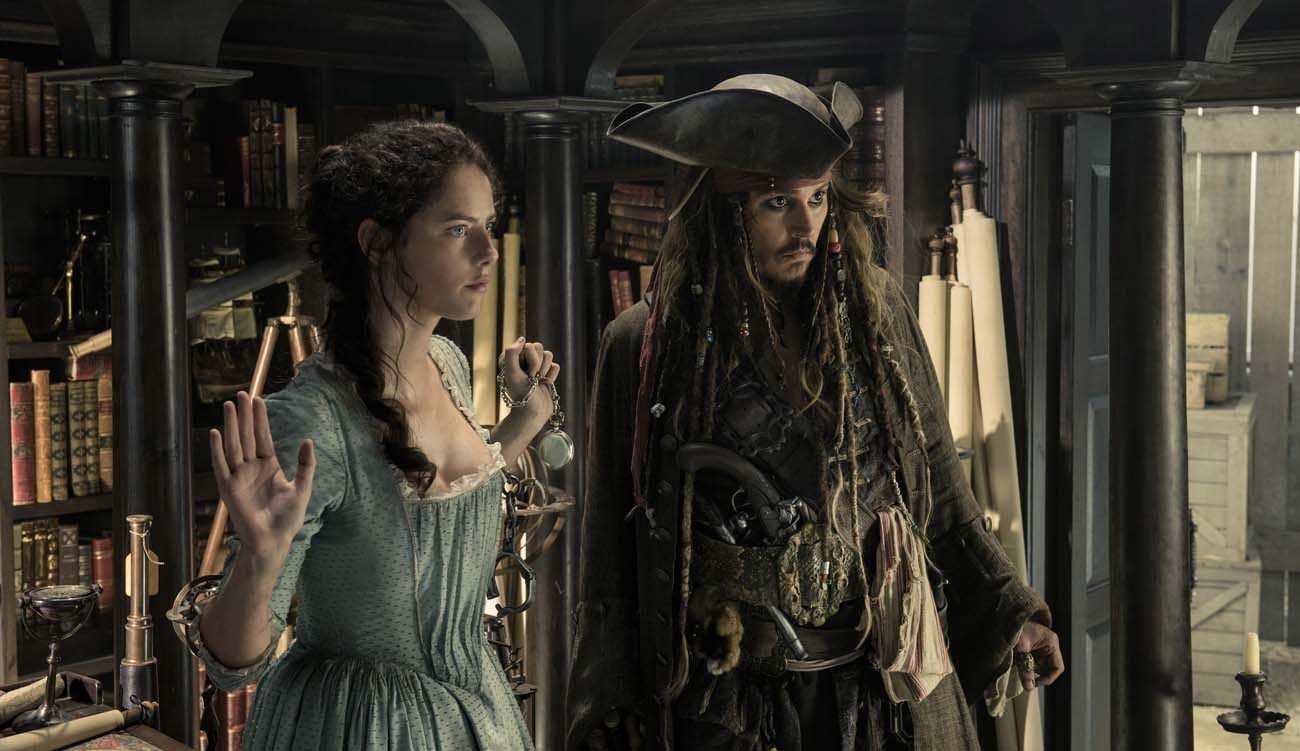 Kaya Scodelario and Johnny Depp star in a scene from the movie "Pirates of the Caribbean: Dead Men Tell No Tales." (CNS photo/Disney)

NEW YORK (CNS) — Iconic and eccentric buccaneer Capt. Jack Sparrow (Johnny Depp) hoists the black flag for a fifth time in “Pirates of the Caribbean: Dead Men Tell No Tales” (Disney). The result is a flashy but ultimately unsatisfying journey for the theme park ride-based franchise that first set sail in 2003.

On the upside, the crowded, overlong proceedings are relatively family-friendly. So parents willing to overlook some adult punning may give mature teens the go-ahead to board.

This time out, Jack joins forces with Carina Smyth (Kaya Scodelario), a young science scholar whose ahead-of-her-time learning has led her to be charged with witchcraft, and with Henry Turner (Brenton Thwaites), an equally youthful sailor. Henry is the son of Jack’s old associates Will (Orlando Bloom) and Elizabeth (Keira Knightley) Turner.

All three main characters are seeking the same magical artifact, the Trident of Poseidon, each for a different reason. They’re pursued along the hunt by the British navy, by the ghost of Capt. Armando Salazar (Javier Bardem), one of Jack’s old adversaries, and by living but one-legged freebooter Capt. Hector Barbossa (Geoffrey Rush).

As directed by Joachim Ronning and Espen Sandberg, “Dead Men” is a special effects-driven adventure long on spectacle but short on human interest. The mayhem is almost all stylized, however, and the dialogue is virtually free of vulgarity.

One scene, played for laughs, finds an incidental character — who subsequently turns out to be married — in a compromising (though not directly sexual) situation with Jack.

The humor, such as it is, jokingly reinforces Jack reputation as a womanizer while also deflating the ego of the cheater’s husband, a pompous town official on the island of St. Martin. It’s a frivolous treatment of a serious subject, but the script quickly passes on to other matters.

On the other side of the moral ledger, late plot developments set the stage for a climactic act of self-sacrificing parental love. And Henry and Carina, who are obviously destined for each other, content themselves, once their bickering morphs into love, with kissing.

The film contains much action violence with little blood, brief implications of adultery, a single gruesome image, occasional mature wordplay and at least one crass term. The Catholic News Service classification is A-III — adults. The Motion Picture Association of America rating is PG-13 — parents strongly cautioned. Some material may be inappropriate for children under 13.

NEXT: With book as a guide, Jesus is invited to dinner at your house