Remains of priest exhumed, verified as part of beatification process 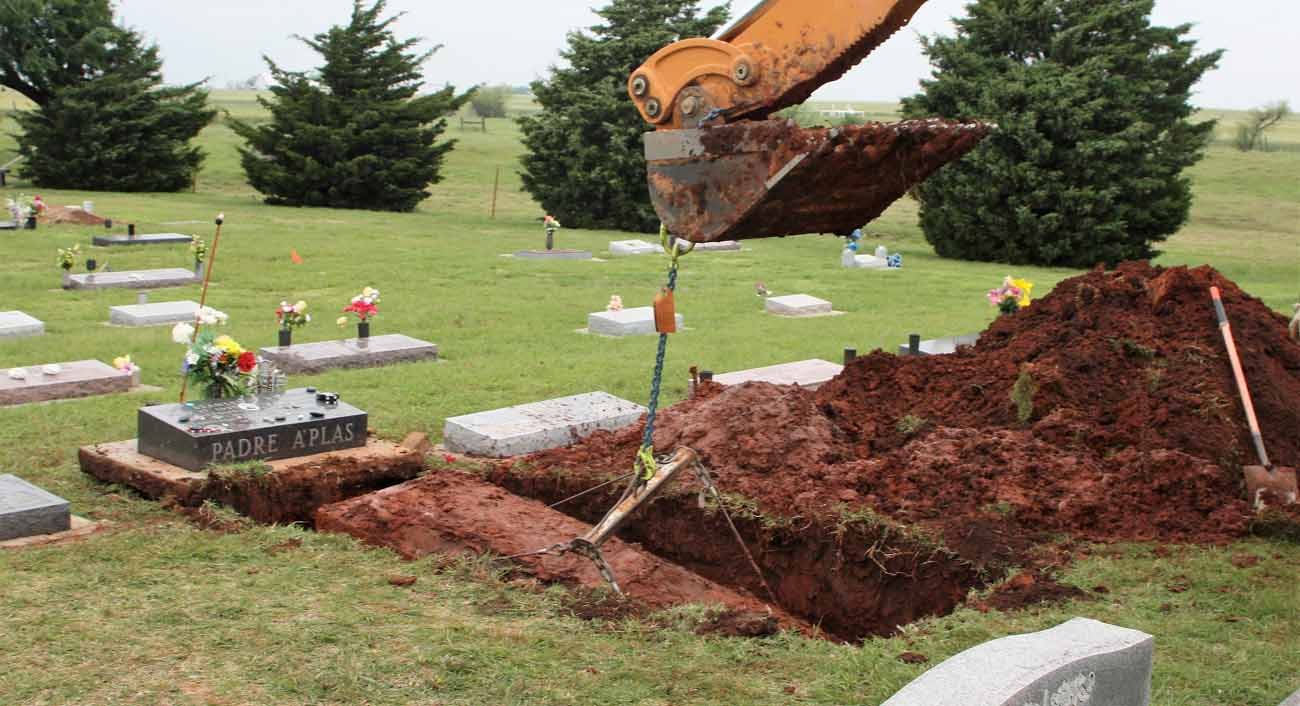 The vault containing Father Stanley Rother's original casket is lifted from its gravesite at Holy Trinity Cemetery May 9 in Okarche, Okla. The priest's remains were transported to Oklahoma City. Father Rother, a North American priest who worked in Guatemala and was brutally murdered there in 1981, will be beatified Sept. 23 in Oklahoma. (CNS photo/Diane Clay, Sooner Catholic)

OKARCHE, Okla. (CNS) — Early on the morning of May 10, the remains of Father Stanley F. Rother were exhumed from Holy Trinity Cemetery in Okarche and transported to Oklahoma City. 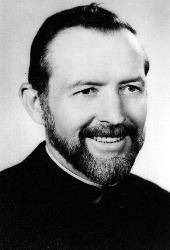 As required by the Catholic Church for the beatification process, his remains were examined by medical professionals and re-interred in the chapel at Resurrection Cemetery in northwest Oklahoma City.

In March, the Archdiocese of Oklahoma City announced that Father Rother, one its native sons who worked in Guatemala and was brutally murdered there in 1981, will be beatified Sept. 23 in a ceremony in downtown Oklahoma City.

Cardinal Angelo Amato, prefect of the Vatican Congregation for Saints’ Causes, will celebrate the beatification Mass along with Archbishop Paul S. Coakley of Oklahoma City. Thousands of cardinals, bishops, priests, deacons and other Catholics from across the United States are expected to attend.

Pope Francis recognized Father Rother’s martyrdom last December, making him the first martyr born in the United States and clearing the way for his beatification.

The Archdiocese of Oklahoma City sent Father Rother, who grew up on a family farm in Okarche, to its mission in Santiago Atitlan, Guatemala, in 1968. He served a poor and indigenous community in the area, helping build a small hospital, a school and its first Catholic radio station. But he also helped the agricultural community with its crops and to build an irrigation system.

Many Guatemalans in his community were kidnapped, disappeared or murdered as the government accused them of sympathizing with rebels during the decades-long conflict that plagued the Central American nation from the 1960s until the late 1990s.

By early 1981, Father Rother had been placed on a hit list along with several members of his parish staff and catechists for their continued aid, education and preaching of the Gospel to the poor population of Tz’utujil Indians.

Father Stanley, known as Father Francisco because his name was hard for the locals to pronounce, was 46 when a group of men entered the rectory and fatally shot him. His assailants were never identified but were believed to be government soldiers.

The Archdiocese of Oklahoma City, then headed by Archbishop Eusebius J. Beltran, opened the priest’s sainthood cause in 2007. At the request of his parishioners in Guatemala, Father Rother’s heart is enshrined inside the Guatemalan church. 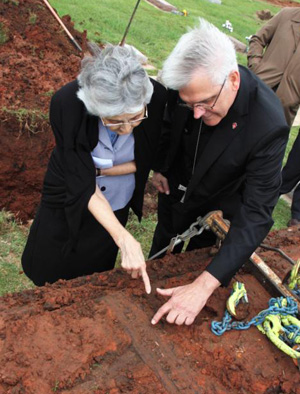 Archbishop Paul S. Coakley of Oklahoma City and Sister Marita Rother, a member of Adorers of the Blood of Christ, who is the sister of Father Stanley Rother, examine the nameplate on his vault May 9 at Holy Trinity Cemetery in Okarche, Okla.  (CNS photo/Diane Clay, Sooner Catholic)

“The witness of Father Rother’s life and death has been a source of encouragement and inspiration to me as a seminarian, priest and now as a bishop. I consider it a great gift to be entrusted with overseeing the continuation of his cause for beatification and canonization begun by Archbishop Beltran,” Archbishop Coakley said in a statement.

“His beatification is an unexpected blessing for Oklahoma and for the United States as we celebrate this ordinary man from humble beginnings who answered the call to serve an extraordinary life,” he said. “His witness will continue to inspire us for generations.”

Before the exhumation of Father Rother’s remains in Okarche, his family led a procession to the gravesite and participated in a prayer.

Once the vault was removed from the gravesite, it was transported to Oklahoma City where his remains were removed, examined and verified. He was placed in a new casket with golden vestments alongside a document signed by those in attendance. A red ribbon was wrapped around the casket and sealed with a wax seal of the Archdiocese of Oklahoma City.

Archbishops Coakley and Beltran led the priests in the singing of “Salve Regina,” a Gregorian chant hymn, before the casket was lowered into a crypt at Resurrection Cemetery.

A closing prayer service wrapped up the solemn process.

“It was a holy day. Father Rother’s presence was felt by many, and we are blessed as the Catholic Church in Oklahoma to present Father Rother’s life to the world,” Archbishop Coakley said.

A temporary sign marks the gravesite at Holy Trinity Cemetery in Okarche where the original vault and casket were reburied. A permanent memorial marker will be placed. His remains will stay in the chapel at Resurrection Cemetery until his shrine is completed.

Clay is editor of the Sooner Catholic, newspaper of the Archdiocese of Oklahoma City.