CELAM to release statement on Venezuela after hearing from its bishops 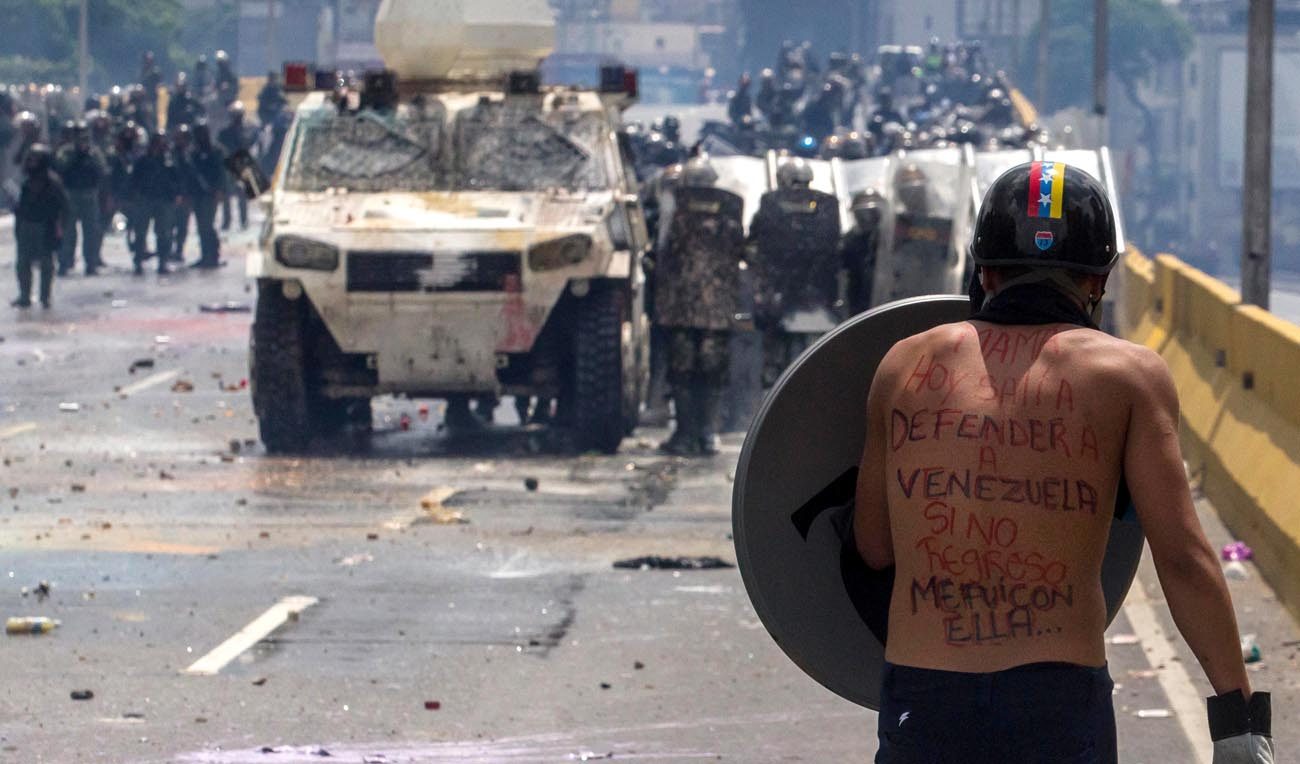 A protester faces the National Guard during clashes May 10 in Caracas, Venezuela. The motto on his back reads: "Mom, today I went out to defend Venezuela. If I do not come back, I went with her." Latin American bishops will discuss the evolving political crisis in Venezuela during a four-day long assembly in El Salvador. (CNS photo/Miguel Guitierrez, EPA)

SAN SALVADOR, El Salvador (CNS) — Latin American bishops will discuss the evolving political crisis in Venezuela during a four-day long assembly in El Salvador in which they are reiterating calls for the church to “go forth” and serve the poor and disadvantaged.

The Latin America bishops’ council, known by its Spanish acronym, CELAM, formed a special commission, headed by the president of the Venezuelan bishops’ conference, Archbishop Diego Padron Sanchez of Cumana, to study the situation and make recommendations.

Cardinal Ruben Salazar Gomez of Bogota, Colombia, president of CELAM, said the council would make a statement on the situation after hearing from Venezuelan representatives.

At least 37 Venezuelans have died during weeks of protests across the South American country as demonstrators have taken to the streets against President Nicolas Maduro’s plans to rewrite the constitution in what they say will expand his powers.

“We are particularly concerned with the situation in Venezuela,” he said during a news conference May 9. “It’s difficult and complex.”

During the CELAM annual assembly, which concludes May 12, bishops plan to discuss a range of issues, including violence, immigration and the need for the church to work more closely with the neediest.

On May 9, the conference released a letter from Pope Francis in which he spoke of the need for the church to be out on the streets, with the people. For that reason, the theme of the assembly is, “a poor church for the poor,” said Cardinal Jose Lacunza Maestrojuan of David, Panama.

Cardinal Lacunza said a poor church must always put first the needs of the poor and disadvantaged while bringing “prudence and transparency” to how it administers projects and uses funds.

“The church feels a responsibility to focus its attention on this, with the goal of administering its resources always on the service to the poor,” he said.

Cardinal Salazar said the goal is to establish a church “which goes forth,” as Pope Francis has repeatedly urged.

Bishops said they should seek to follow the model of Blessed Oscar Romero, the former archbishop of San Salvador, who was killed while celebrating Mass in 1980. Archbishop Romero, who would have turned 100 this year, was depicted in a large portrait on a table in the room where the bishops gathered.

Blessed Romero “has given us an example of what it means to surrender oneself to God; may Archbishop Romero accompany us in this assembly,” said San Salvador Archbishop Jose Luis Escobar Alas, president of the Salvadoran bishops’ conference.

The Vatican is studying a miracle attributed to the intercession of Blessed Romero, but no date has been set for his canonization. In an interview published by CELAM, Archbishop Escobar Alas said that decision would be made by the Vatican.