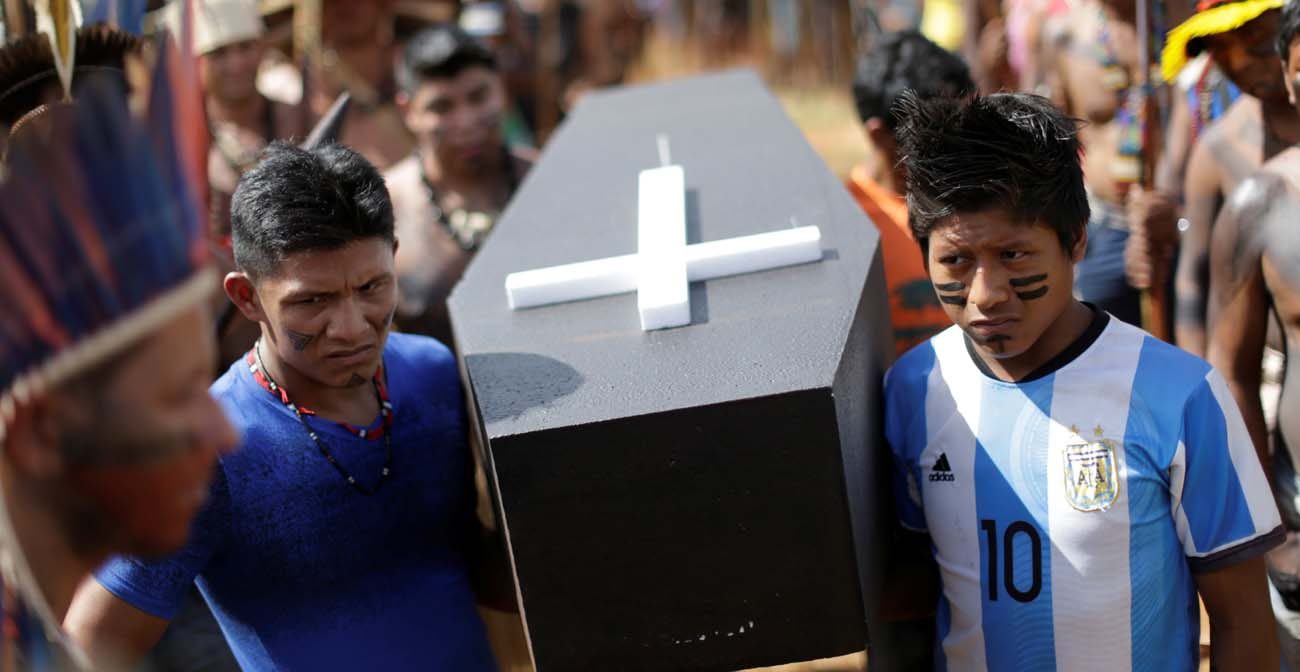 SAO PAULO (CNS) — The Brazilian bishops’ Indigenous Missionary Council criticized an attack in a remote area of Maranhao state in which 13 Gamela Indians were injured.

Brazilian authorities were still trying to piece together what really happened April 30 as farmers and members of the Gamela indigenous tribe clashed in an area about 150 miles from Sao Luis. Among the injured, five were shot and two had their hands severed.

“We repudiate the actions by militias in Maranhao state that attacked in cowardly and criminal manner members of the Gamela tribe, who were just trying to retake what is historically theirs,” Archbishop Roque Paloschi of Porto Velho, president of the missionary council, told Catholic News Service.

Archbishop Paloschi said the attack was a brutal reminder of the lack of protection and of human rights violations directed toward the indigenous communities in Brazil.

“Unfortunately, the government is shunning away from its responsibility, and systematic attacks against the Gamela, as well as other tribes throughout the country, continue to occur,” the archbishop said.

In a May 2 open letter to Brazilian bishops at their general meeting in Aparecida, Archbishop Paloschi said the Brazilian indigenous political scenario is chaotic.

“The imminent risk of setbacks against indigenous rights, especially in terms of territory, is high. The worsening of human rights violations of indigenous peoples in Brazil is evident,” said the letter.

The Indigenous Missionary Council, or CIMI, as it is known by its Portuguese acronym, said members in Viana reported that approximately 20 indigenous entered the farm area April 30 in an attempt to retake land that belonged to their ancestors. The members of the Gamela tribe remained in the area until dark, when they decided to leave, fearing their safety.

CIMI workers said that, on the way out of the farm, the indigenous were met by a heavily armed group that began to fire as the Gamela tried to run for safety. Among them were women and children.

“We are afraid of new attacks at any moment,” a Gamela told CIMI volunteers, adding: “The police are saying that it was not an attack, but a confrontation. This is not true; we were caught in a trap. We can barely defend ourselves.”

CIMI said the area was traditionally given to the Gamela tribe by the Portuguese Crown in the 1800s. The indigenous population, however, was driven out of the region to another part of what is now Maranhao and Piaui states in the early 1900s. In all, approximately 400 Gamela families remain in Brazil, with a total population of around 2,000. The 1988 Brazilian Constitution did not include the area in the demarcation of indigenous lands to be conducted and, since 2003, the Gamela have been fighting to go back to their traditional lands.

The Brazilian bishops’ Pastoral Land Commission also condemned the attack as deplorable. “We denounce that the criminal and violent action that took place on Sunday was planned and articulated by farmers and gunmen of the region, who, through a text in WhatsApp, called people to attack the Indigenous,” said a press statement.

The commission said the Maranhao government had already been warned of the volatile situation but had ignored the information. The commission’s data shows that in 2016 alone there were 196 occurrences of violence recorded against the indigenous in the state; thirteen 13 people were killed and 72 threatened with death. It said there were currently 360 areas of conflict in Maranhao state.

PREVIOUS: Egypt is a beacon of hope and refuge, pope says

NEXT: Evangelizers must ‘go and listen, not ‘go and proselytize,’ pope says