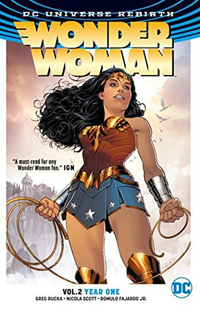 NEW YORK (CNS) — Iconic DC Comics superhero Wonder Woman is having a good year as she celebrates her 75th birthday. Along with a wide-release movie featuring the character, the comic itself has been rebooted with a new writer and artist — Greg Rucka and Nicola Scott.

Fortunately, the relaunch doesn’t come across as a quickie cash grab. Instead it delivers a carefully crafted work of art.

The first series of new Wonder Woman comics have been collected in a trade paperback, “Wonder Woman Vol. 2: Year One.” (The story and art in Volume 1 were less impressive than in this book, which also serves as an origin story.)

There are a couple of issues for parents. The first is the most obvious: While Scott’s gorgeous art is never exploitative, beautiful Wonder Woman is pictured, as before, wearing a flashy and somewhat revealing costume. The action in this comic, moreover, which is rated T — for teens and older by the DC Comics ratings system, makes it unsuitable for young children.

More troubling, Rucka has said in interviews that his Wonder Woman is bisexual. However, this idea is never explored in any detail in the comic.

There are small hints, such as a female saying she will be brokenhearted if Wonder Woman leaves, and Wonder Woman and a fellow Amazon kissing on the cheek to say goodbye. But these episodes can easily be interpreted as signs of friendship. In fact, such nonphysical same-gender relationships were once a fixture of social interaction before the culture became overly sexualized.

Nonetheless, parents will have to consider what weight to give Rucka’s statement — even if it isn’t followed up on in his text.

In reaching back to the start of the Wonder Woman narrative, Rucka and Scott cover territory familiar to the Amazon’s fans. Princess Diana is a demigoddess from Paradise Island, the hidden, all-female nirvana also known as Themyscira.

One day, U.S. military officer Steve Trevor crash-lands on the island, and the Amazons see this as a sign from the gods that they need to end their isolation. They decide to send an emissary back to our world, a representative of peace and love.

Entering human society, Diana Prince, as she is now known, inflicts harm on bad guys and inspires awe in everyone else. Bullets bound off her wrist wraps, she flies in an invisible airplane, and those tangled in her golden lasso are forced to tell the truth.

But what if Diana’s journey is a well-laid trap? Is there an enemy manipulating the Amazons, drawing them out of their paradise in order to exploit them? Lurking in the shadows throughout the story is the god Ares, Wonder Woman’s prime nemesis. What is Ares plotting?

Scott’s art is so rich that the story sometimes seems beside the point. Rucka and Scott portray Diana not only as a powerful warrior but as someone who is compassionate and a bit naive. As a neophyte in the world of men, Wonder Woman has always been an innocent who is guided by her strong moral code. In fact, she’s something of a female version of Superman, another fish out of water.

NEXT: Viewers of ‘All Eyez on Me’ might want to avert their ears