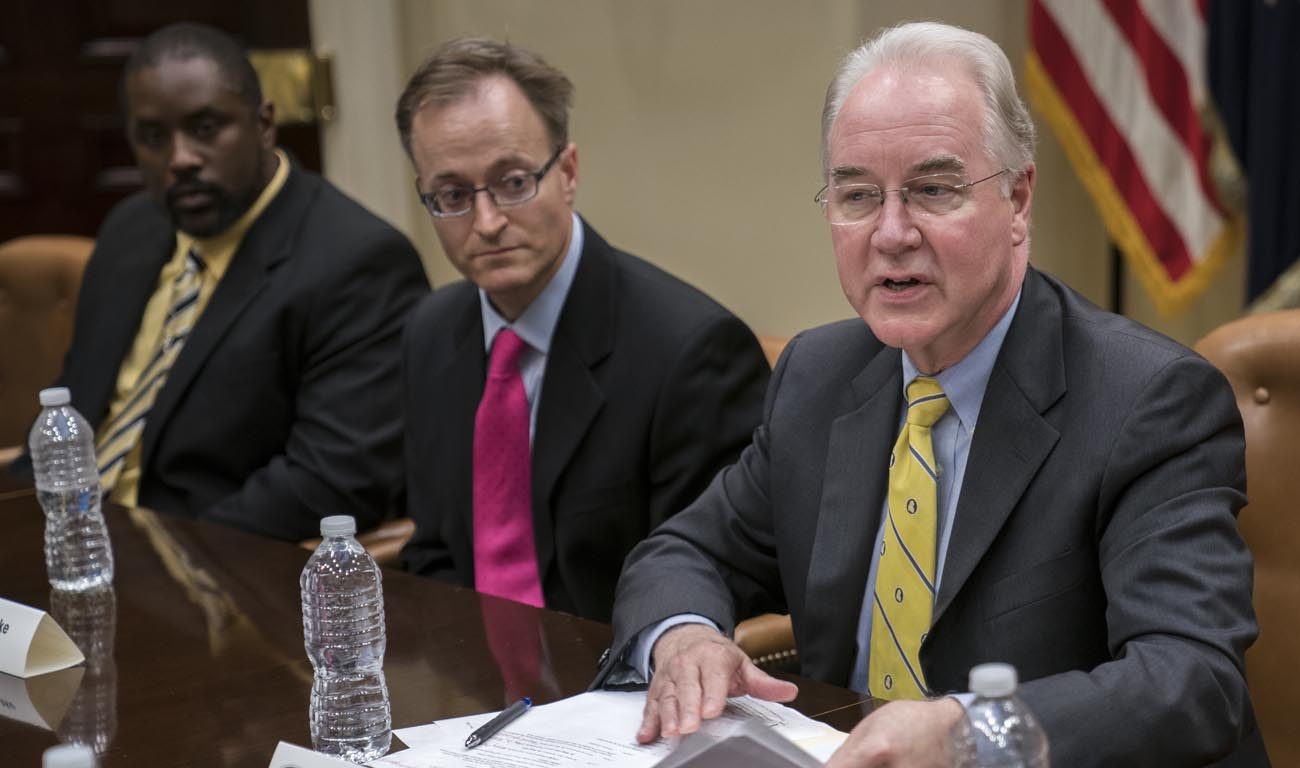 Health and Human Services Secretary Tom Price conducts a health care listening session June 21 at the White House in Washington. "An acceptable health care system provides access to all, regardless of their means, and at all stages of life," Bishop Frank J. Dewane of Venice, Fla., said in a June 22 statement. (CNS photo/Shawn Thew, EPA)

WASHINGTON (CNS) — The Senate’s Better Care Reconciliation Act contains “many of the fundamental defects” that appeared in the House-passed American Health Care Act “and even further compounds them,” said the bishop who heads the U.S. bishops’ Committee on Domestic Justice and Human Development.

“As is, the discussion draft stands to cause disturbing damage to the human beings served by the social safety net,” Bishop Frank J. Dewane of Venice, Florida, said in a statement released late June 22. “It is precisely the detrimental impact on the poor and vulnerable that makes the Senate draft unacceptable as written.”

Bishop Dewane criticized the “per-capita cap” on Medicaid funding, which would no longer be an entitlement but have its own budget line item under the Better Care Reconciliation Act. The effect, he said, “would provide even less to those in need than the House bill. These changes will wreak havoc on low-income families and struggling communities, and must not be supported.”

“An acceptable health care system provides access to all, regardless of their means, and at all stages of life,” Bishop Dewane said. “Such a health care system must protect conscience rights, as well as extend to immigrant families.”

He indicated the Better Care Reconciliation Act at least partially succeeds on conscience rights by “fully applying the long-standing and widely supported Hyde Amendment protections. Full Hyde protections are essential and must be included in the final bill.”

However, the bishops “also stressed the need to improve real access for immigrants in health care policy, and this bill does not move the nation toward this goal,” Bishop Dewane said. “It fails, as well, to put in place conscience protections for all those involved in the health care system, protections which are needed more than ever in our country’s health policy.”

Other first-day reaction to the bill was negative.

The Senate’s 142-page draft “is not the faithful way forward,” said a June 22 statement from Sister Simone Campbell, a Sister of Social Service who heads the Network Catholic social justice lobby.

“My faith challenges me to heal the sick and care for the widow and the orphan. This Republican bill does the opposite,” she said, adding, “We urge a no vote on the Better Care Reconciliation Act.”

“Learning about the proposed deep cuts in Medicaid passed by the House of Representatives, the American people looked to the Senate. Sadly, the Senate plan proposes even deeper cuts in Medicaid,” said a statement from Larry Couch, director of the Sisters of the Good Shepherd’s National Advocacy Center.

“This wanton disregard for human life must be stopped. Millions of children living in poverty, people with disabilities, and older people in nursing homes will be denied life-saving medicine and care,” Couch added. “Stop this vicious attack on the most vulnerable people in our communities.”

Sister Campbell criticized the Republican-only drafting of the bill, and the announced intent of Senate Majority Leader Mitch McConnell, R-Kentucky, to have a vote on the bill before the Fourth of July recess, which could severely limit debate on the bill or any amendments.

“This bill is a crass political calculation carried out by 13 white, male senators who are out of touch with the realities of millions of ordinary families in every state,” she said. “Democracy works best when there are hearings, debate, and discussion to craft a bill that works for everyone, not just a few senators.”

“Ending the Medicaid expansion at a slower rate still means that millions of Americans will have their health care coverage taken away. Senators who support this bill will be voting to take away health insurance from the elderly, the disabled, and children,” said a June 22 statement from the Rev. David Beckmann, a Lutheran minister who is president of Bread for the World, a Christian anti-hunger lobby.

“Medical bills often drive families, especially those who struggle to make ends meet, into hunger and poverty,” Rev. Beckmann added. “Instead of making our health care system worse, Congress should strive to improve the system so that all Americans have the health care coverage they need.”

Network, Bread for the World and the Sisters of the Good Shepherd are part of the Interfaith Healthcare Coalition, which also includes as members the Presbyterian Church (U.S.A.) Office of Public Witness; the Commission on Social Action of Reform Judaism; the Ecumenical Poverty Initiative; the United Church of Christ Justice & Witness Ministries; and the Friends Committee on National Legislation.

The American Psychological Association also came out in opposition to the bill, citing the Medicaid cuts and permission to states to waive certain health benefits.

“This so-called Better Care Reconciliation Act is actually worse than the bill passed by the House, because it would undermine Medicaid even more severely, if a little more slowly,” said a June 2 statement by Antonio E. Puente, APA president. “Medicaid is a critical backstop of coverage for mental health treatment, and for millions of older Americans, children and individuals with disabilities. If the goal is to cover more people, why slash Medicaid when it is already much more cost-effective than private sector plans?”

One part of the bill cuts the federal government’s share of funding for Medicaid to 57 percent of its cost over the next seven years. States have picked up the balance of the funding to date.

Under the Affordable Care Act, the government had guaranteed that its funding for adults newly eligible for Medicaid would fall to no lower than 90 percent of their costs. Many states expanded Medicaid coverage for all adults ages 18-65 with incomes up to 133 percent of the federal poverty level.

The bill would reduce tax credits to help people buy insurance and would defund Planned Parenthood for one year under the bill. It is expected the Senate will take up the measure on the floor during the week of June 26.

According to an Associated Press analysis, the Republicans’ health bill “cuts taxes by nearly $1 trillion over the next decade, mostly for corporations and the richest families in America.”

The Better Care Reconciliation Act which would repeal taxes in the Affordable Care Act — popularly known as Obamacare — and structure subsidies for insurance policy-holders based on their incomes. It also would continue for at least two years to offer reimbursements to health insurance companies for subsidies that reduce out-of-pocket costs for low-income customers of Obamacare plans.

The bill would allow children to stay on their parents’ health plans to age 26. It also would fund $62 billion over eight years to a state innovation fund, which can be used for coverage of high-risk patients, reinsurance and other expenses.

The Congressional Budget Office is expected to issue its “score” of the Senate bill before the end of June.

But calling it “mean and heartless legislation,” Sen. Patty Murray, D-Washington, said the bill is “going to gut Medicaid. It’s going to take away care for our seniors” and “from millions of people across the country,” to “give another massive tax cut for the wealthy and well-connected.”

NEXT: Circle of Protection mobilizes to change nation’s budget priorities