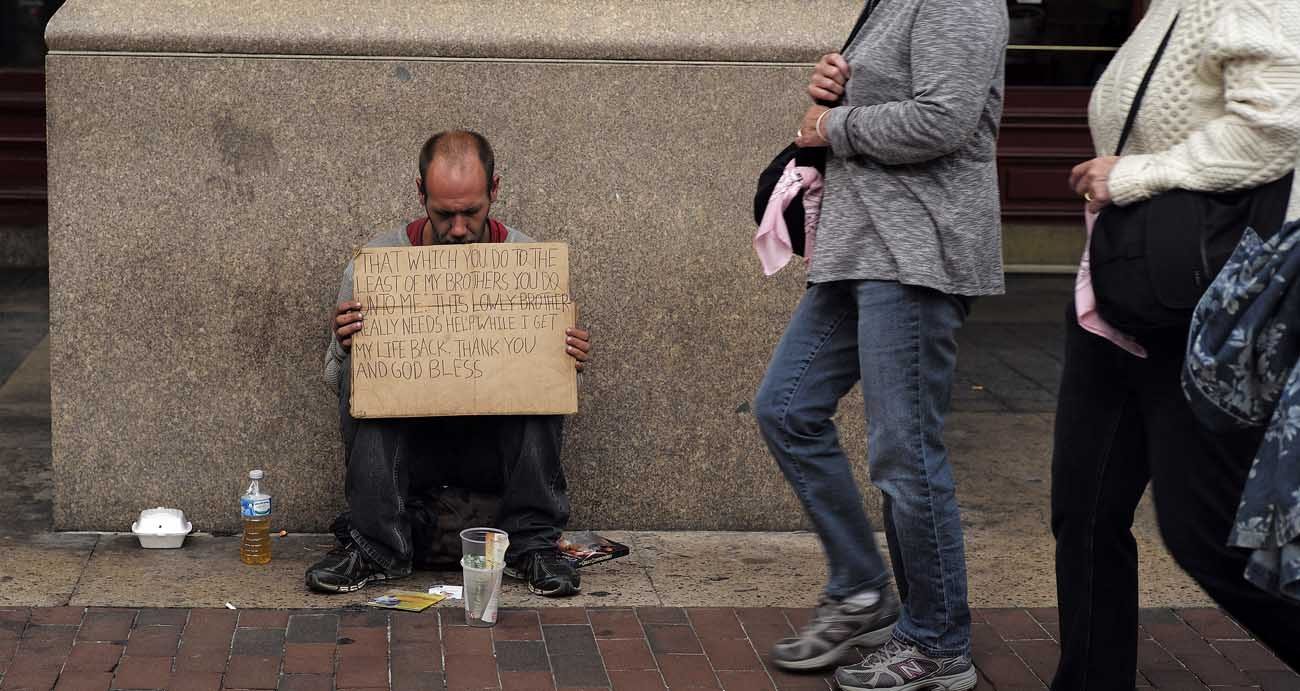 A homeless man holds a sign in 2015 along a sidewalk in Philadelphia. Faith leaders in the Circle of Protection group have pledged to organize their congregations to contact Congress to head off proposed deep spending cuts in vital social service programs. (CNS photo/CJ Gunther, EPA)

Coming together during a news conference at the National Press Club June 21, more than a dozen leaders, including representatives of the U.S. Conference of Catholic Bishops and Catholic Charities USA, lined up shoulder-to-shoulder in a unified front to defend a broad array of domestic and international aid programs that, they argued, sustain life.

They used strong language in criticizing planned cuts in food and nutrition, education, elderly services, health care, air and water protection, employment training and more. They said they feared that people will be harmed or even die if the budget as proposed is adopted.

“There is a troubling momentum at this time in Washington, D.C., for creating a serious imbalance in overall spending priorities, one that will place those who struggle on the margins of society, on the peripheries, in grave danger,” said Bishop Frank J. Dewane of Venice, Florida, chairman of the U.S. bishops’ Committee on Domestic Justice and Human Development.

Bishop Dewane and the others repeated a simple message: A budget is a moral document that reflects the values and priorities of a country and they are concerned that the priorities being eyed by Washington have gone askew.

What particularly concerns the Circle of Protection group is how the budget assembled by Mick Mulvaney, director of the Office of Management and Budget, slices $52 billion from programs that help Americans cope with sickness, unemployment and homelessness to pay for a corresponding increase in the Pentagon budget.

The Rev. Carlos Malave, executive director of Christian Churches Together in the USA, charged that “the few” at the top end of the U.S. economy “are denying the masses a future” in the pursuit of power and riches.

Bishop Dewane called it “scary” when the defense budget is contrasted with cuts in social services. While he said defense spending is needed, he suggested that some shaving there would be in order.

“One part of the budget (defense) is about defending killing, if you want to put it that way,” he told Catholic News Service. “But the other (reduced social service spending) kills also.”

There has been little appetite in Congress for the stringent Trump budget. Democrats, as expected, have voiced strong opposition to any change in spending priorities. Republicans have described the Trump budget plan simply as a starting point.

The budget that will emerge later this summer is expected to limit the size of the cuts while boosting military spending in some fashion. And there’s likely to be changes in how programs such as Medicaid and the Supplemental Nutrition Assistance Program, formerly food stamps, function.

With those expectations looming, the Circle of Protection umbrella group of faith leaders is preparing to up its game to stop what these leaders see as an unfair targeting of poor people.

The Rev. Jim Wallis, president of Sojourners, an ecumenical advocacy organization, said the group wanted members of Congress to stand up for the Christian values they hold and “speak as people of faith.” He called for a mobilization of religious congregations to tell Congress that programs that promote human life must become a priority for the country.

“Underneath the headlines in Washington, there are moral choices we make,” Rev. Wallis told CNS. “We want to make those moral choices clear. For us, this is not a matter of politics or partisan loyalty.

“What if a legislator can say, ‘I’m hearing from my Christian constituents that we have to form a circle of protection because people are in jeopardy?’ That circle has to be broadened. We’re lifting that up,” he said.

The Circle of Protection coalition released a two-page statement during the news briefing. In it, the leaders stressed that the country must address the national debt, but also called on Congress to “approve a budget that weighs the importance of providing for critical needs and that responsibly manages the country’s fiscal issues; but the most vulnerable should not carry the burden of solving this challenge.”

The statement cited how the recently House-passed American Health Care Act would cut more than $800 billion from Medicaid over the next decade and end health insurance under the Affordable Care Act for 23 million people, including 14 million poor individuals. On top of that, the administration’s budget would cut another $600 billion Medicaid in the same period.

Bishop Dewane said the challenge ahead requires the Circle of Protection members to help lawmakers in Congress see the faces behind the numbers of the federal budget.

“There’s where you make connections if you’re looking at a budget,” he explained to CNS. “Behind every number, there’s human faces. And that’s what I think they’re not seeing. They’re caught up in that number, but behind it are human faces and that’s who we need to look to.”

The leaders acknowledged they face a tremendous challenge in advocating for America’s poor and vulnerable because powerful special interests carry great influence in Congress.

Still, they say they hope their message, rooted in the Bible will sway Congress to act on behalf of vulnerable Americans.

“Wouldn’t that be a great cable news story to see legislators,” Rev. Wallis said, “who expressed their Christian faith, to come together apart from party and say, ‘We are together as Christians going to protect the poor. It’s very simple. It’s very clear. It’s very unified and … it’s very biblical.”

NEXT: Communicators must recognize value, importance of words, author says