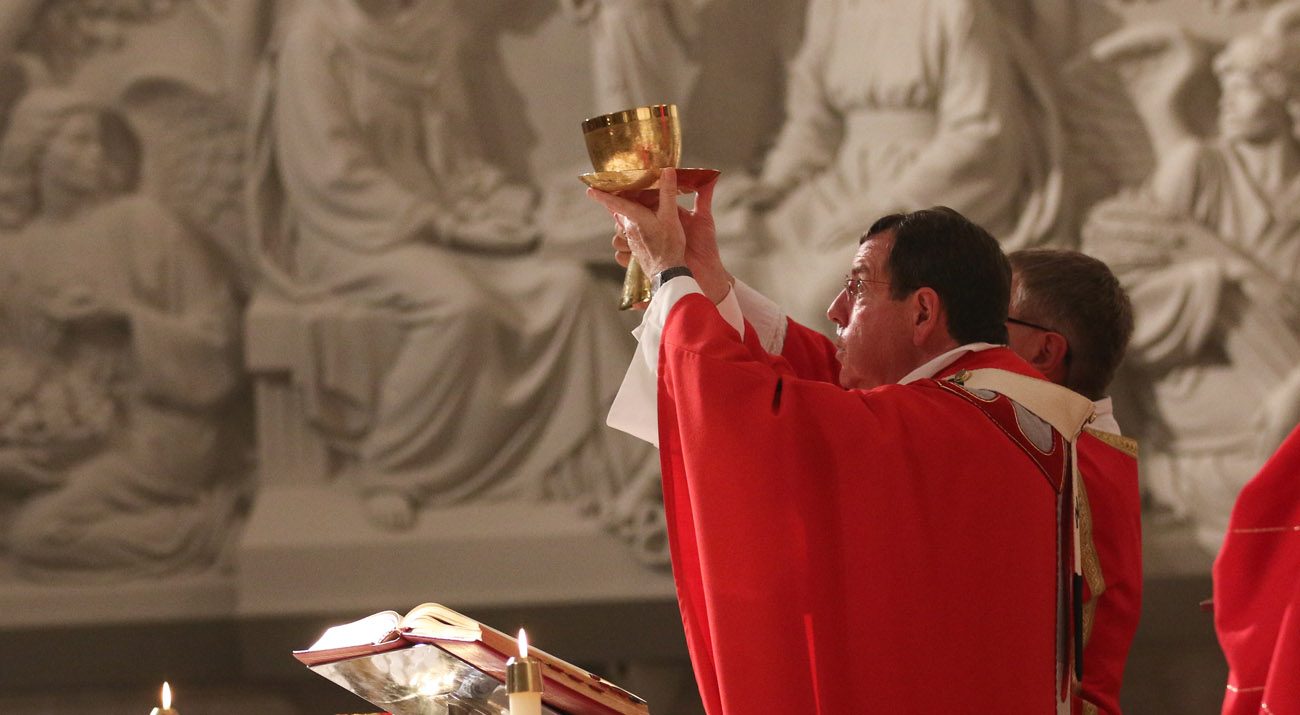 Detroit Archbishop Allen H. Vigneron celebrates Mass on the vigil of Pentecost June 3 at the Cathedral of the Most Blessed Sacrament in Detroit. (CNS photo/Jonathan Francis, Archdiocese of Detroit)

DETROIT (CNS) — From the scattered languages of the tower of Babel to the apostles speaking in tongues at the first Pentecost, the methods of communication have varied over the years.

The message of the Gospel, however, has not.

On the eve of Pentecost 2017, Archbishop Allen H. Vigneron of Detroit took to a new platform to announce anew the urgent need to re-encounter the saving power of Jesus Christ in southeast Michigan.

Celebrating Mass at the Cathedral of the Most Blessed Sacrament before a congregation of synod members and non-members alike, many clad in the fiery red color of the occasion, the archbishop announced the release of his official response to the historic archdiocesan Synod 16 in the form of a 40-page pastoral letter, “Unleash the Gospel.”

Speaking in both English and Spanish, Archbishop Vigneron thanked the synod members for their work in helping recommend the changes and priorities that will help guide the Archdiocese of Detroit in the years ahead.

“Tonight, this vigil, in the year of grace 2017, is very much about our synod and our efforts to ‘unleash the Gospel,'” Archbishop Vigneron said. “This is a historic moment for our local church. The Holy Spirit has worked very hard in our hearts since the synod, and tonight we consecrate the fruits of his labors within us.”

Vigils, the archbishop said, are always about expectations, sometimes serious — such as the vigil of a mother concerned about a sick child — and sometimes joyful, such as that of a child waiting for St. Nicholas on Christmas Eve.

“Our vigil tonight is both serious and light, because we are here to solemnly consecrate and promulgate the work of our synod as celebrated on the feast of Christ the King,” the archbishop said. “We are here to pray about the fruit of that synod.”

“This vigil is the occasion to publish the pastoral letter, which I hope in some way has gathered up the fruits of our synod,” the archbishop continued. “It’s my witness to what I understood the Holy Spirit said to us, not only in those days, but through all the years and months that led up to that celebration.”

Along with the pastoral letter, which was released on a special website, unleashthegospel.org, the Pentecost Mass also was a chance for the archbishop to unveil a new coat of arms for the Archdiocese of Detroit, featuring an image of St. Anne and a door representing Capuchin Father Solanus Casey, a sainthood candidate declared “venerable” for his heroic virtues. Both were prominent intercessors for the city. The new seal was displayed on large banners near the sanctuary of the cathedral.

Calling the pastoral letter a “charter to guide us in the years ahead,” Archbishop Vigneron said it’s imperative for everyone to pray for the Holy Spirit to descend upon the archdiocese for the gifts needed to accomplish God’s will.

“The first prayer I’d like all of us to be united in would be to pray for boldness,” Archbishop Vigneron said. “This requires all of us to be bold, the same boldness that led Peter to come out from behind the locked doors of the cenacle to begin to proclaim that Jesus Christ is risen from the dead.”

Archbishop Vigneron said the situation of modern times requires that the demands of the Gospel be responded to with “urgency,” adding that both preaching and catechesis must first seek to foster an encounter with Jesus that makes one thirst for more.

“Whenever possible, we need to invite people to respond to Jesus and surrender their lives to him, and give them concrete opportunities to do so,” Archbishop Vigneron said. “That’s what the Holy Spirit told us in the synod.”

No one can be a bystander in the new evangelization, the archbishop said, and all who engage in it must do so with self-sacrificing love.

“If we love Christ, how can we not seek to share that love with others?” Archbishop Vigneron asked. “Because not only is he the best thing that has ever come into our lives, but it’s what he wants: to be loved by others.”

Finally, the archbishop said, the people of the Archdiocese of Detroit must pray for faith and hope to believe that the Catholic Church in southeast Michigan is a “New Testament reality.”

Pointing out that the Acts of the Apostles ends abruptly with St. Paul’s imprisonment in chapter 28, Archbishop Vigneron implored the church to think of itself as the “29th chapter of Acts” and to believe that what God promised to the apostles, he promises also to his church in the present day.

“This is our story. It is our reality,” the archbishop said. “So when we hear God say to Ezekiel about how he wants to restore life to dry bones, we should think of ourselves. Are there not many dry bones here in our archdiocese?”

“But these dry bones can live,” he emphasized. “We know this by faith: God can take what is dead and make it alive. He did it before the sun rose on the first day of the week after Good Friday, and he can do it here.”

Archbishop Vigneron drew lengthy applause when he expressed his hope that in 20 years, the Archdiocese of Detroit would have “so many saints there won’t be enough days in the calendar to hold all the feasts,” adding, “Father Solanus won’t be the only blessed.”

Celebrating the Mass with the archbishop were each of the Archdiocese of Detroit’s four active auxiliary bishops, Bishops Donald F. Hanchon, Arturo Cepeda, Gerard W. Battersby and Robert J. Fisher, along with several priests and deacons.

NEXT: Knights begin campaign to raise funds for Christians in the Middle East