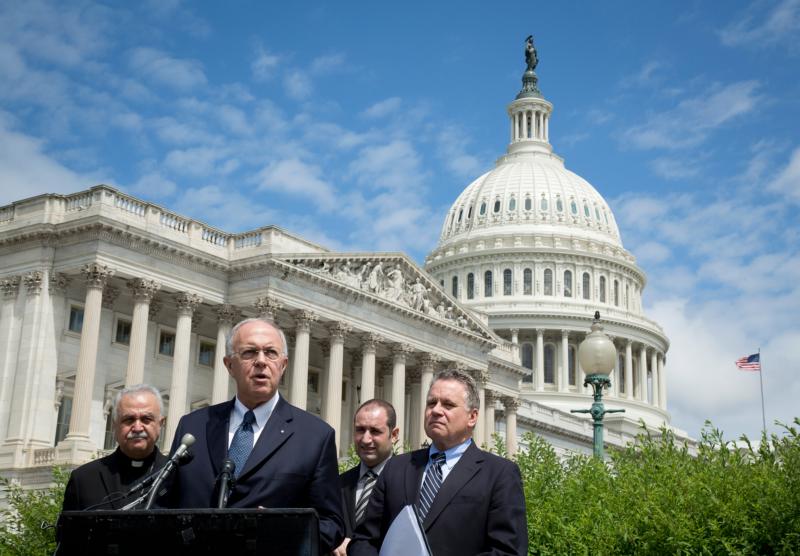 Supreme Knight Carl Anderson, CEO of the Knights of Columbus, speaks near the U.S. Capitol in Washington June 7. He, along with members of Congress, expressed support for the bipartisan Iraq and Syria Genocide Emergency Relief and Accountability Act. (CNS photo/Tyler Orsburn)

WASHINGTON (CNS) — The co-authors of a House bill that will provide humanitarian aid to Christians and other religious groups suffering at the hands of Islamic State militants praised the June 6 House passage of the measure and urged the Senate to quickly act on it.

The House unanimously approved the bipartisan Iraq and Syria Genocide Emergency Relief and Accountability Act, or H.R. 390, in a voice vote.

Co-authored by Rep. Chris Smith, R-New Jersey, and Rep. Anna Eshoo, D-California, the bill will provide emergency relief and aid to the victims of genocide in Iraq and Syria, particularly the Christians in the Middle East as well as other religious minorities.

The humanitarian aid will be directed to groups such as the Chaldean Catholic Archdiocese of Irbil, Iraq, which provides direct care for victims, and those groups in turn get the assistance to those in need.

“This legislation appropriately focuses on atrocities being committed against Christians and other religious and ethnic minorities in the Middle East, especially in Iraq and Syria,” the chairman of the U.S. bishops’ international policy committee said in a June 9 letter urging swift passage by the Senate.

Writing as chairman of the U.S. bishops’ Committee on International Justice and Peace, Bishop Oscar Cantu of Las Cruces, New Mexico, said: “As the situation in Syria and Iraq remains dire for minorities, I note that H.R. 390 calls for much needed assistance for survivors of genocide and would allow faith-based organizations — such as Catholic Relief Services — that are already providing humanitarian assistance to these populations, to access U.S. government funding in their work.”

He addressed his letter to Sens. Bob. Corker, R-Tennessee, and Ben Cardin, D-Maryland, who are, respectively, chairman and ranking member of the Senate Foreign Relations Committee. The bishop pointed out that “over the years, the Catholic Church has consistently supported Christians and other religious and ethnic minorities facing persecution in the Middle East, many of whom are internally displaced or have fled as refugees.”

On June 7 Smith and Eshoo held a news conference urging the Senate to continue the progress of this legislation to ensure the swift direction of funds to the Middle East.

“We are celebrating something today that we believe is something that is going to make a difference in the lives of tens of thousands of people who have been persecuted by ISIS,” Eshoo said. “Certainly the Christians, those of my own background, the Yezidis, and other minorities in the Middle East.”

Since 2013, Smith has actively worked through hearings and mission trips to spread awareness of the situation of the victims of ISIS in the Middle East. Part of the effort was to get the United States to admit that what was occurring was genocide.

“As I think many of you know, Congress has been trying for the better part of three years to finally get a designation of genocide being committed by ISIS against Christians, Yezidis and some other Muslim minorities in the area,” Smith said. “Ultimately, it did become a policy of the United States of America.”

When then-Secretary of State John Kerry issued a declaration of genocide about ISIS in March 2016, it was one of the few times in the nation’s history that the U.S. government had made such a determination. Eshoo said the declaration requires further legislation that will confirm what the victims have endured.

“They too, like people in our country, want their lives to go on, especially for their children,” Eshoo said. “The State Department would not allow any U.S. dollars to flow to church organizations and this legislation allows for that.”

In addition to sending humanitarian aid for groups in Iraq and Syria to provide to genocide victims, the bill also ensures that the government’s money will be monitored.

“There will be accountability for these dollars,” Eshoo said. “But it is so essential to work with those who are on the ground that know exactly where the dollars should go.”

Supreme Knight Carl Anderson, the CEO of the Knights of Columbus, has worked with Smith to get support of the bill and has testified on behalf of the measure.

The Knights of Columbus has donated over $12 million to groups in the Middle East aiding Christian refugees. In addition, they recently began an ad campaign in an effort to raise more funds.

“These are people who are still praying in the language of Jesus,” Anderson said. “They have every right to survive.”

Chaldean Catholic Bishop Bawai A. Soro, who heads the Diocese of St. Peter the Apostle, which is based near San Diego, also attended the news conference. He said the current situation for Christians in the Middle East remains fragile, as they suffer at the hands of radical Islamic groups.

“It is very unfortunate that Iraq as a country still lacks the certain constitutional amendments that guarantee liberty and equality to all Iraqis,” Bishop Soro said. “It remains our dream that the Christians will not be second-class citizens in their own native homeland, Iraq. But instead, they will hopefully soon have equal social, economic, political, lives and statuses just as all Iraqis have.”

Haider Elias, president of the human rights group Yazda, whose own brother and other relatives were killed by ISIS, spoke to the critical aspect of the bill.

“As this legislation has been passed by the House, we urge the Senate to act upon it and expedite it as quickly as possible,” Elias said. “These Yezidis and Christians are in dire need for such assistance in order to survive as religious minorities in our region.”

Smith said that they have contacted several representatives in the Senate who they believe will offer similar support to the bill. He said he hopes they will vote within the next couple of weeks.

“I think its very important that the Senate moves quickly — within weeks,” Smith said. “There’s no reason for delay on this. Its not a complicated bill.”

PREVIOUS: Knights begin campaign to raise funds for Christians in the Middle East