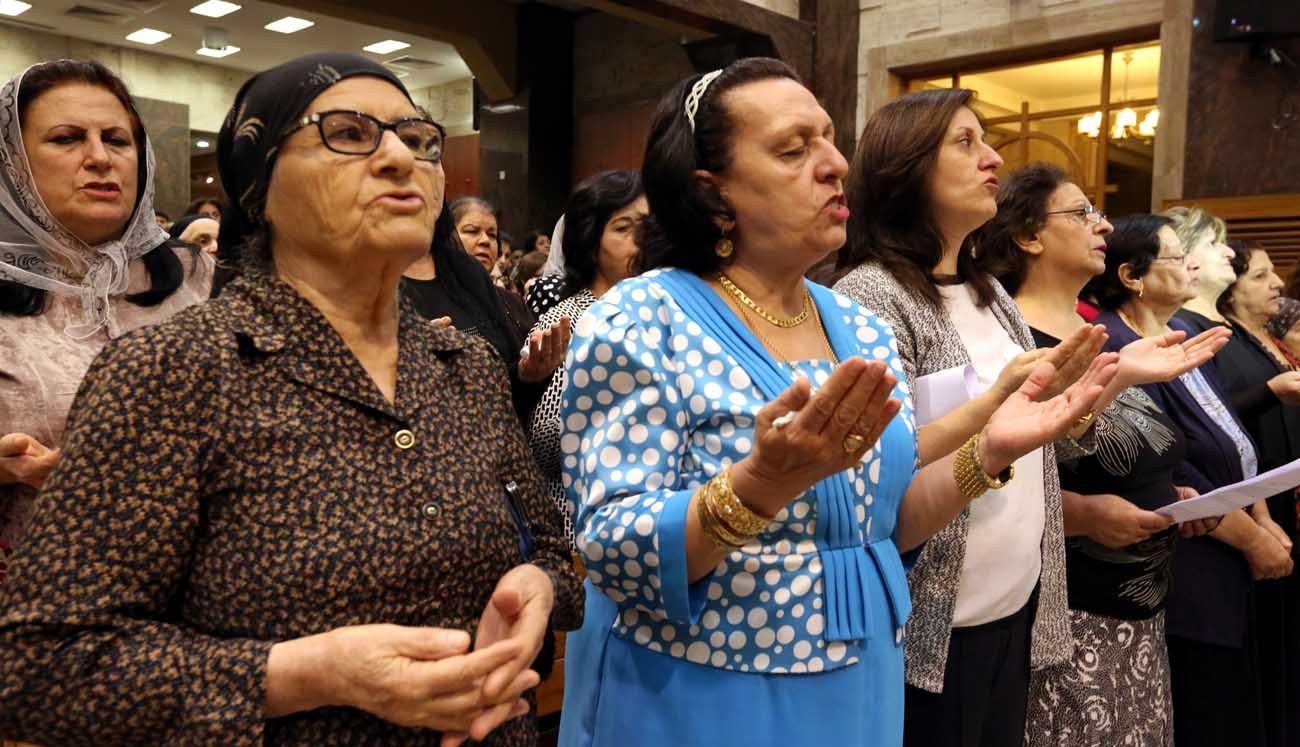 Worshippers pray in 2016 at the Church of our Lady of Perpetual Help in Ankawa, Iraq. The Knights of Columbus has begun a nationwide television and digital ad campaign to spread awareness of the situation of Christians in the Middle East and raise funds on their behalf. (CNS photo/Ahmed Jalil, EPA)

WASHINGTON (CNS) — The Knights of Columbus has begun a nationwide television and digital ad campaign to spread awareness of the situation of Christians in the Middle East and raise funds on their behalf.

Because of attacks by Islamic State militants, Christians in Iraq and other targeted groups in Egypt, Jordan, Lebanon and Syria have fled their homes, escaping both destruction and lack of safety.

The Chaldean Catholic Archdiocese of Irbil and other private entities are working to provide displaced Christians with necessary means of survival, but a lack of funds prevents them from supplying refugees with all that they need to remain in Iraq and other areas. Without means of survival, Christians are forced to leave the country, putting the numbers of Christians in the Middle East at unsustainable levels.

“We must act and act quickly if Christianity is to survive in the Middle East,” Supreme Knight Carl Anderson, the Knights of Columbus CEO, said in a statement. “Three years after ISIS rolled through their country, these minority communities of Christians could face extinction without our help, and if they disappear, the chance for a pluralism and tolerance of minorities will be increasingly lost in that country.”

The ad features Father Douglas Bazi, a Chaldean Catholic priest from the Kurdish region in northern Iraq. He tells the story of how he was taken by Islamic militants and tortured for nine days. “Help my people and save my people,” Father Bazi says in the ad.

The Knights also are encouraging Congress to pass the Iraq and Syria Genocide Emergency Relief and Accountability Act, known as H.R. 390, which would provide U.S. government funds to groups in Iraq that provide displaced Christians with the basic humanitarian needs of food, shelter and medicine.

The House of Representatives unanimously passed the bill June 6 and the Knights hoped the Senate will approve the bill and send it on to President Donald Trump to sign into law.

In an interview with Catholic News Service June 5, Stephen Rasche said the bill needs to be passed as soon as possible to get humanitarian aid to the people who need it.

“If it gets bogged down in procedures, and ends up taking months and months to get here, it would be too late,” said Rasche, who works for the Chaldean Catholic Archdiocese of Irbil in Iraq under Archbishop Bashar Warda. He also is the project coordinator for the Ninevah reconstruction committee.

Without the support of groups such as the Archdiocese of Irbil, which provides goods to the displaced Christians, Christians must decide if they will leave Iraq or if they can stay.

“We face a serious shortfall in the money needed just to cover the costs of providing food to the displaced Christians in our care,” said Archbishop Warda in a statement. “Having to decide between rebuilding homes and feeding the displaced is not a choice; it is a potential death sentence for our Christian communities.”

In 2003, there were about 1.5 million Christians in the area, and now numbers have decreased to about 200,000. Rasche said the archdiocese is trying to keep those Christians in Iraq and resettle them into their homes or other safe places.

“If we don’t continue to support them and take care of them throughout the next couple of months, all the indications say that they will leave and move on to what is next,” Rasche told CNS in a phone interview during a visit to the United States.

The Knights of Columbus will match $1 million in donations made before July 1. It said each dollar spent goes directly to food programs for Christians in Iraq.

“This campaign that the Knights are running now is a campaign that can make a historical difference as to whether or not Christianity survives in Iraq,” Rasche said. “There are people that have been there since the first century, they received their Christianity from the Apostle Thomas and the Apostle Thaddeus and they are in danger of disappearing. That is a real thing and that can happen within the next year.”

Editor’s Note: Donations to the Knights’ campaign can be made at www.ChristiansatRisk.org or by calling (800) 694-5713.

NEXT: House OKs bill to aid genocide victims; Senate urged to act quickly on it