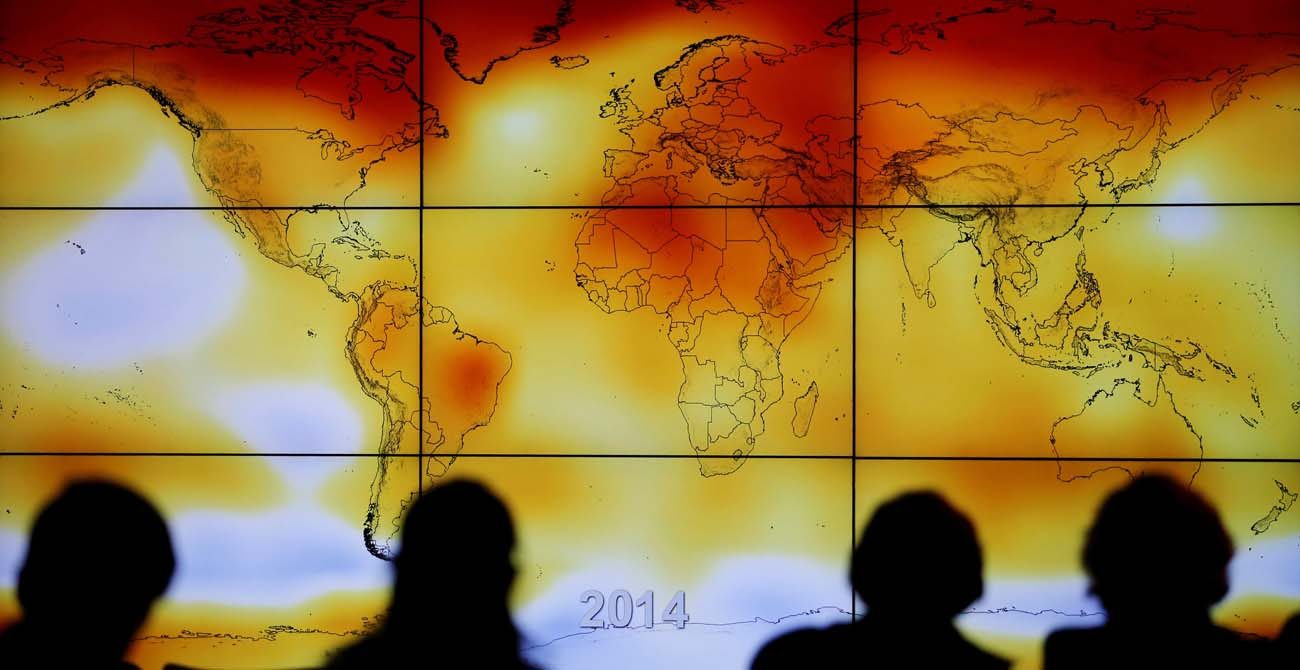 Participants look at a screen showing a world map with climate anomalies during the World Climate Change Conference at Le Bourge, France, in this Dec. 8, 2015, file photo. Bishop Oscar Cantu of Las Cruces, New Mexico, chairman of the U.S. bishops' international justice and peace committee, said in a June 1 statement President Donald Trump must honor the nation's commitment to the Paris agreement to protect the planet. (CNS photo/Stephane Mahe, Reuters)

WASHINGTON (CNS) — President Donald Trump’s June 1 decision “not to honor the U.S. commitment” to the Paris climate agreement “is deeply troubling,” said the chairman of the U.S. bishops’ Committee on International Justice and Peace.

“The Scriptures affirm the value of caring for creation and caring for each other in solidarity. The Paris agreement is an international accord that promotes these values,” Bishop Oscar Cantu of Las Cruces, New Mexico, said in a statement released shortly after the president made his announcement in the White House Rose Garden.

“President Trump’s decision will harm the people of the United States and the world, especially the poorest, most vulnerable communities,” the bishop said after Trump announced the U.S. will withdraw immediately from the Paris accord.

“The impacts of climate change are already being experienced in sea level rise, glacial melts, intensified storms, and more frequent droughts,” Bishop Cantu said. “I can only hope that the president will propose concrete ways to address global climate change and promote environmental stewardship.”

Trump said the climate accord “is less about the climate and more about other countries obtaining a financial advantage over the United States.”

Bishop Cantu said that although the Paris agreement is not the only possible mechanism for addressing global carbon mitigation, the lack of a current viable alternative is a serious concern.

He said the U.S. Conference of Catholic Bishops, Pope Francis “and the entire Catholic Church have consistently upheld the Paris agreement as an important international mechanism to promote environmental stewardship and encourage climate change mitigation.”

Before Trump made his announcement, Bishop Cantu issued a statement saying the United States had an obligation to honor the Paris agreement to protect “our people and our planet” and “mitigate the worst impacts of climate change.” He urged Trump to honor the accord.

“We write about our shared obligation to care for the environment. The Judeo-Christian tradition has always understood ‘the environment’ to be a gift from God,” said the letters urging the Trump administration officials in their respective capacities to reaffirm the U.S. commitment to the Paris accord.

“Pope Francis called on the world’s leaders to come together to protect the gift of our common home. … We have one common home, and we must protect it,” they said.

In both statements Bishop Cantu noted that the U.S. bishops have for years “voiced support for prudent action and dialogue on climate change,” as far back as their 2001 statement on global climate change and again in 2015 in a letter to Congress. They have, he said, “reiterated their support on several occasions.”

“Pope Francis and the Holy See have also consistently voiced support for the Paris agreement,” Bishop Cantu said. In his earlier June 1 statement, Bishop Cantu said the pope’s 2015 encyclical “Laudato Si’, on Care for Our Common Home” was timed “to urge the nations of the world to work together in Paris for an agreement that protects our people and our planet.”

The Paris accord has been ratified by 134 of the 197 countries that approved it in December 2015 under the U.N. Framework Convention on Climate Change. President Barack Obama ratified on its own, bypassing the U.S. Senate. The agreement went into force in October after enough countries ratified it.

A day before Trump announced the immediate withdrawal of the U.S. from the climate accord, Cardinal Peter Turkson, prefect of the Vatican’s Dicastery for the Integral Development of People, told reporters in Washington that “the decision to possibly pull out for us is something we hoped would not have happened.”

“The Vatican would always respect the decision of a sovereign state,” added Cardinal Turkson, who was in Washington for a conference at Georgetown University. “We will continue to still talk about climate change and all of that, and hope that some change can occur midstream.”

The bishop and the academies are at the forefront of promoting scientific studies on climate change and implementation of the recommendations in Pope Francis’ encyclical “Laudato Si'” on care for the environment. The pope gave Trump a copy of the document when they met May 24 at the Vatican.

In an interview June 1 with the Italian newspaper La Repubblica, Bishop Sanchez said he did not think Trump and Pope Francis discussed climate change in any depth when they met, however climate change was a significant part of the discussions the president and top staff members had with Cardinal Pietro Parolin, Vatican secretary of state.

“In that sense, if he really does what the leaks suggest, for us it will be a huge slap in the face,” the bishop said.

Obama deserves some of the blame, the bishop said, because “he took decisions on climate only through presidential orders, leaving open the possibility that his successor would change everything. That’s the problem. Today, in just one day, Trump could change all the cards on the table to the disadvantage of many and to the advantage of the oil lobby.”

“The cardinal was expressing their view that they think it’s an important issue,” Tillerson said shortly after the meeting. “I think they were encouraging continued participation in the Paris accord. But we had a good exchange on the difficulty of balancing addressing climate change, responses to climate change, and ensuring that you still have a thriving economy and you can still offer people jobs so they can feed their families and have a prosperous economy.”

Dennis Sadowski in Washington and Cindy Wooden in Rome contributed to this story.