Pope tells archbishops not to be ‘armchair Catholics,’ but apostles 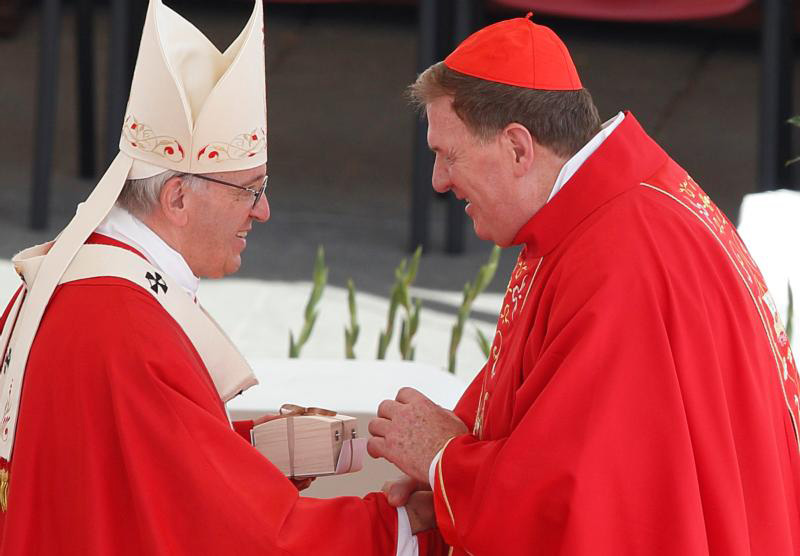 Pope Francis presents a box containing a pallium to Cardinal Joseph W. Tobin of Newark, N.J., at the conclusion of Mass marking the feast of Sts. Peter and Paul in St. Peter’s Square at the Vatican June 29. New archbishops from around the world received their palliums from the pope. The actual imposition of the pallium will take place in the archbishop’s archdiocese. (CNS photo/Paul Haring)

VATICAN CITY (CNS) — The Catholic Church’s new cardinals and new archbishops must be willing to risk everything, patiently endure evil and bear crosses like Jesus did, Pope Francis said.

“The Lord answers our prayers. He is faithful to the love we have professed for him, and he stands beside us at times of trial.” Just as he accompanied the apostles, “he will do the same for you,” the pope told five new cardinals and about 30 archbishops named during the past year.

Pope Francis addressed the new cardinals and archbishops during his homily at a Mass in St. Peter’s Square June 29, the feast of Sts. Peter and Paul, who are the patron saints of the Vatican and the city of Rome.

The Mass was celebrated the day after Pope Francis created new cardinals from El Salvador, Mali, Laos, Sweden and Spain. Thirty-six archbishops appointed over the course of the past year were also invited to come to Rome to concelebrate the feast day Mass with Pope Francis. They came from 26 countries.

The concelebrants included Cardinal Joseph W. Tobin of Newark, New Jersey; and Archbishops Paul D. Etienne of Anchorage, Alaska; and Charles C. Thompson of Indianapolis. All three of the U.S. prelates have deep connections to the Archdiocese of Indianapolis. Archbishop Etienne was a priest of the archdiocese and Cardinal Tobin is the former archbishop.

In what has become the standard practice, the pope did not place the pallium on new archbishops during the liturgy. Rather, after the Mass, the pope handed each archbishop a pallium folded up in a small, simple wooden box tied with a brown ribbon as a soloist sang “You Got to Walk that Lonesome Valley,” a traditional American gospel song.

The actual imposition of the woolen band was to take place in the archbishop’s archdiocese in the presence of his faithful and bishops from neighboring dioceses. The pallium symbolizes an archbishop’s unity with the pope and his authority and responsibility to care for the flock the pope entrusted to him.

After the Mass, Cardinal Tobin told Catholic News Service that St. John XXIII had said “cardinals and bishops are the coat hangers on which the church hangs its tradition. Now I don’t like being a coat hanger, but the thing I like to wear the most is the pallium.”

Being made of lamb’s wool, the pallium is a reminder of “the need and really the obligation of the bishop to look for the one who is lost and then bring the lost one back on his shoulders,” the cardinal said. “I hope to do that in Newark.”

Archbishop Etienne noted that the pallium also is “symbolic of the unity of the metropolitan archbishops with the Holy Father and, through him, with the universal church.”

It tells an archbishop that his role is to be a good shepherd to his flock, “to help the people entrusted to my pastoral care to learn to live in unity and peace, to manifest that truth and love of Jesus Christ and the Gospel,” he said.

“The role of every priest, and particularly every bishop, is to be more and more transformed into Christ and that’s my prayer,” Archbishop Etienne said. “And then whatever burdens come and challenges, I’ll find my peace because I will be firmly convinced in experiencing his presence with me.”

Archbishop Thompson told CNS he received the pallium from Pope Francis as a gift for the sixth anniversary of his ordination as a bishop.

Pope Francis “has been such a great model, example and witness, and to receive this from him,” the archbishop said, is “a reminder to go forth. I think about Jesus at the Last Supper when he washed the feet of the disciples and said, ‘Now, go and do as I have done.'”

Archbishop Thompson said he kept watching Pope Francis during the Mass and looking at the pallium the pope wears as a symbol of the universality of his mission. “I watched him in his role of being the shepherd” and knew the pope was calling him “now to go forth and be that shepherd for the people entrusted to my care.”

In his homily at the Mass, the pope said the life of every apostle is built on: constant, edifying prayer; a firm, passionate profession of faith; and a willingness to patiently endure persecution.

People must ask themselves whether they are “‘armchair Catholics,’ who love to chat about how things are going in the church and the world,” he said, or if they are “apostles on the go,” who are on fire with love for God and ready to offer their lives for him.

Apostles of Christ “know that they cannot just tread water or take the easy way out, but have to risk putting out into the deep, daily renewing their self-offering,” he said.

Christians must follow the Lord completely and live according to his ways, not ways guided by personal self-interest, he said. Christ’s way “is that of new life, of joy and resurrection; it is also the way that passes through the cross and persecution.”

In different parts of the world, “often in complicit silence, great numbers of Christians are marginalized, vilified, discriminated against, subjected to violence and even death, not infrequently without due intervention on the part of those who could defend their sacrosanct rights,” the pope said.

However, there is no Christ and no Christian without the cross, he said. “Christian virtue is not only a matter of doing good, but of tolerating evil as well,” he said, quoting St. Augustine.

Enduring evil means “imitating Jesus, carrying our burden, shouldering it for his sake and that of others,” knowing that the Lord is by one’s side.

Finally, the pope said, prayer is another essential element of the life of an apostle as it “is the water needed to nurture hope and increase fidelity. Prayer makes us feel loved and it enables us to love in turn.”

As is customary, a delegation from the Orthodox Ecumenical Patriarchate of Constantinople attended the Mass for the feast of Sts. Peter and Paul.

Before the Mass, Archbishop Job of Telmessos, head of the Orthodox delegation, joined the pope in prayer at the tomb of St. Peter inside St. Peter’s Basilica. The two also stopped before a bronze statue of St. Peter, which was adorned with a jeweled tiara, ring and red cope.

Contributing to this story were Cindy Wooden and Junno Arocho Esteves.