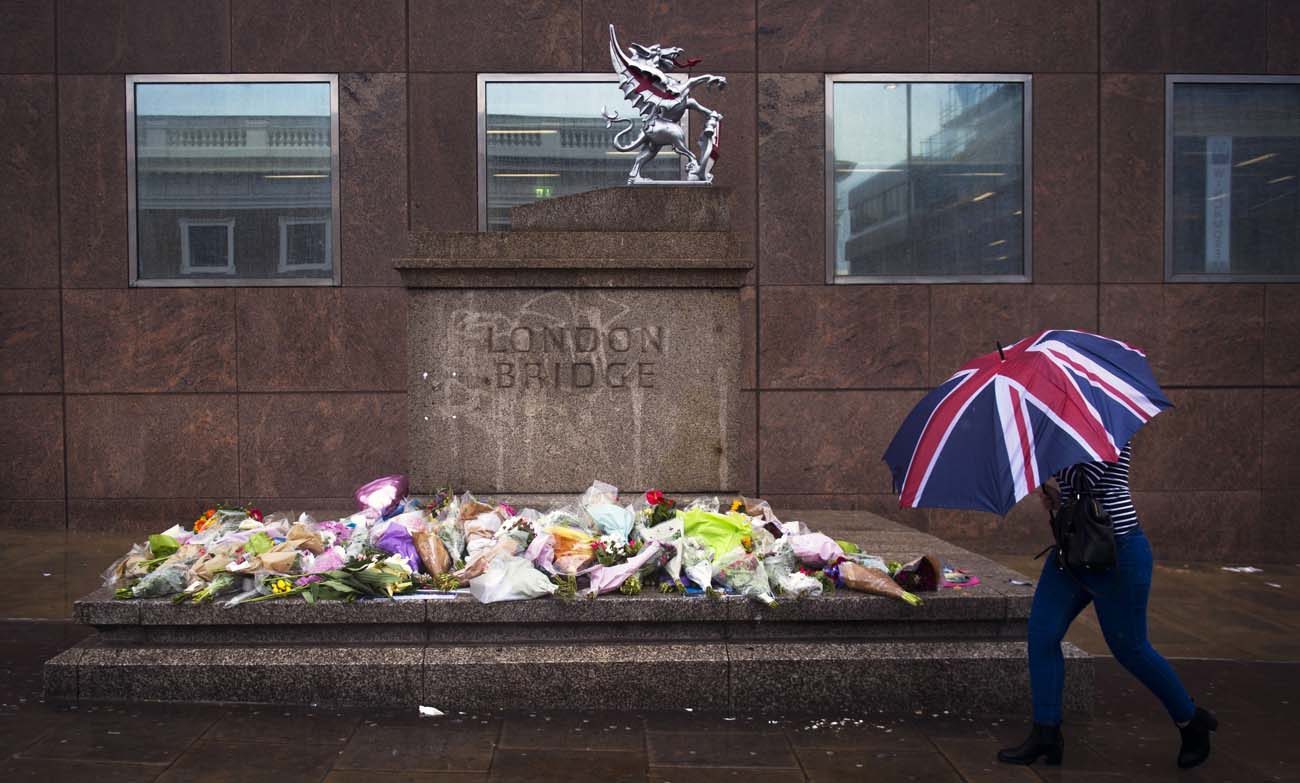 A person walks past a memorial for victims of the London Bridge terror attacks in London, June 6. Archbishop Peter Smith of Southwark, the archdiocese that covers London south of the River Thames, offered prayers for the victims, survivors and first responders. (CNS photo/Will Oliver, EPA)

MANCHESTER, England (CNS) — Archbishop Peter Smith of Southwark, the archdiocese that covers London south of the River Thames, where a terrorist attack June 3 claimed 7 lives and injured 48 people, offered prayers for the victims and survivors.

“Following the tragic attack on innocent people last Saturday evening in the Borough, we pray for those who have been killed and those who were injured, some critically, and I offer our sympathy to their families, friends and colleagues,” Archbishop Smith said in a June 6 statement.

The incident unfolded, authorities said, when three men in a van mowed down people on the London Bridge and then left the vehicle to go on a killing spree in Borough Market, a popular restaurant and bar district located south of the river. Some people in the market area attempted to stop the attackers by throwing chairs and bottles at them, police said. The three men were shot and killed by police at the scene.

“I want to thank the police, the other emergency services and members of the public who rushed to help the victims,” said the archbishop, who serves as the vice president of the Catholic Bishops’ Conference of England and Wales.

Archbishop Smith praised first responders for their courage under difficult circumstances “despite the danger to themselves, and we pay tribute to them and give them our heartfelt thanks for all that they have done.”

“We must remember and pray for their families too as they wait anxiously for the return of loved ones involved in these terrible incidents,” the statement said. “It has been a reminder to us that at times of adversity over the centuries in this country, the whole community has come together to help and support victims of crime and warfare with extraordinary generosity and selflessness.”

In a June 5 statement sent to Catholic News Service, Bishop Mark Davies of Shrewsbury, England, said under current circumstances, “This is a moment when we need to recall the Christian values on which British society is based.”

“We have already seen how acts of selfless charity, the recognition of the stranger as our neighbor and gestures of solidarity have been shown to be stronger than the terror of murderous hate and violence,” he said.

“We must find our security in these true values which make us stronger than those who seek to terrorize and divide us,” he added. “I am sure these Christian foundations of British society can withstand any threat of division between individuals or communities in this land.”

Bishop Philip Egan of Portsmouth, England, said in a June 5 telephone interview with CNS that he suspected “aggressive secularism” might be partly to blame for the rise of radical Islam in the United Kingdom.

“There are many factors in why somebody should become radical, but it (Islamic terrorism) is a Satanic and evil way of drawing attention to suffering and to the lack of God in life,” Bishop Egan said.

“It is a disruption to draw attention,” he continued. “I don’t think we understand it properly, I don’t think we have a clear view of why people do these horrible things, but I think part of it is a reaction to living in a highly materialistic, highly secularized society where everything is focused on work, on the horizontal, and the critical theological values are somehow blocked out.”