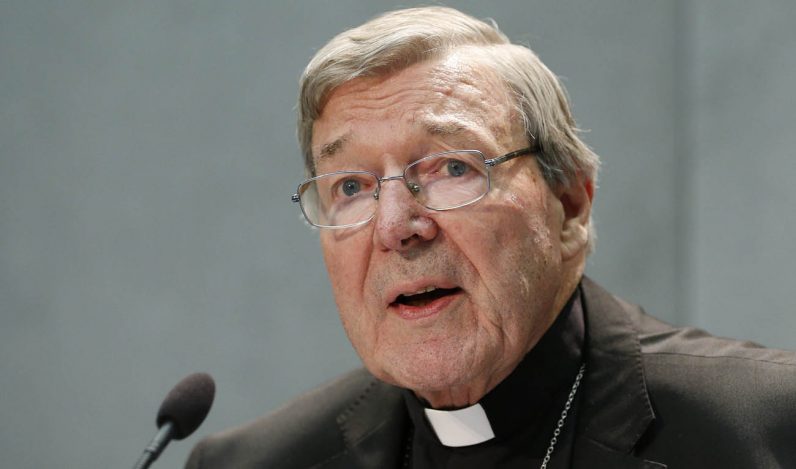 Australian Cardinal George Pell delivers a statement in the Vatican press office June 29. Speaking after Australian authorities filed sexual abuse charges against him, the cardinal denied all charges and told reporters he looks forward to having an opportunity to defend himself in court. (CNS photo/Paul Haring)

“I’m innocent of these charges. They are false. The whole idea of sexual abuse is abhorrent to me,” he said June 29 during a brief news conference in the Vatican press office.

Greg Burke, director of the Vatican press office, said Pope Francis had granted Cardinal Pell a leave of absence from his position as prefect of the Vatican Secretariat for the Economy so that he can work on his defense.

Cardinal Pell, Burke added, will not participate in any public liturgies while his case is being considered.

Without giving specifics about the number of charges or the incidents, police in Australia’s Victoria state announced June 29 that charges had been filed against the cardinal and that he has been called to appear in court July 18.

Patton also told reporters, “It is important to note that none of the allegations that have been made against Cardinal Pell have obviously been tested in any court yet.”

“Cardinal Pell, like any other defendant, has a right to due process and so therefore it is important that the process is allowed to run its natural course,” Patton added.

In his statement, Cardinal Pell said he had kept Pope Francis informed “during these long months” when police and the Australian media were talking about the possibility of charges being made.

“I have spoken to him on a number of occasions in the last week, I think most recently a day or so ago,” Cardinal Pell said of Pope Francis. “And we talked about my need to take leave to clear my name, so I’m very grateful to the Holy Father for giving me this leave to return to Australia.”

Cardinal Pell said he had spoken to his lawyers about the timing of his return to Australia and also had consulted his doctors about the trip.

In February 2016, Australia’s Royal Commission Into Institutional Responses to Child Sexual Abuse allowed Cardinal Pell to testify by video link from Rome because a heart condition prevented him from traveling to Australia.

A year ago, in July, allegations surfaced in a report by the Australian Broadcasting Corp. featuring several people who accused Cardinal Pell of sexual assault; at least one of the accusations had been found to be unsubstantiated by an Australian court in 2002. Some accusations dated to the late 1970s, when Cardinal Pell was a priest in Ballarat, Australia.

Speaking to reporters at the Vatican June 29, the cardinal said, “All along I have been completely consistent and clear in my total rejection of these allegations. News of these charges strengthens my resolve, strengthens my resolve. And court proceedings now offer me an opportunity to clear my name and then return here, back to Rome, to work.”

When the allegations surfaced last year, Cardinal Pell dismissed them as “nothing more than a scandalous smear campaign,” and a statement issued by his office said that “claims that he has sexually abused anyone, in any place, at any time in his life are totally untrue and completely wrong.”

In October, Australian police questioned Cardinal Pell in Rome regarding the accusations.

While Burke, the Vatican spokesman, told reporters that the Vatican respects the Australian justice system, he also said people should remember that Cardinal Pell “has openly and repeatedly condemned as immoral and intolerable the acts of abuse committed against minors” and, as a bishop, “introduced systems and procedures both for the protection of minors and to provide assistance to victims of abuse.”

Archbishop Anthony Fisher of Sydney, in a statement released shortly after the cardinal’s news conference, said, “Many people will be shocked, as I have been, by the news that Victoria Police have issued charges against Cardinal George Pell in relation to sexual abuse allegations.”

“Cardinal Pell has repeatedly and vehemently rejected these allegations and insisted that he is completely innocent,” the archbishop said. “He will now have the opportunity to put his case in court and is determined to clear his name.”

“The George Pell I know is a man of integrity in his dealings with others, a man of faith and high ideals, a thoroughly decent man,” the archbishop added.

Archbishop Fisher said the Archdiocese of Sydney will “assist with the cardinal’s accommodation and support, as it would for any of its bishops or priests” as the legal process unfolds, however, he said, “it is not responsible for the cardinal’s legal bills arising from these matters.”

“Where complaints of abuse are made, victims should be listened to with respect and compassion and their complaints investigated and dealt with according to law,” Archbishop Fisher said. At the same time, “no one should be prejudged because of their high profile, religious convictions or positions on social issues.”

NEXT: Pope tells archbishops not to be ‘armchair Catholics,’ but apostles