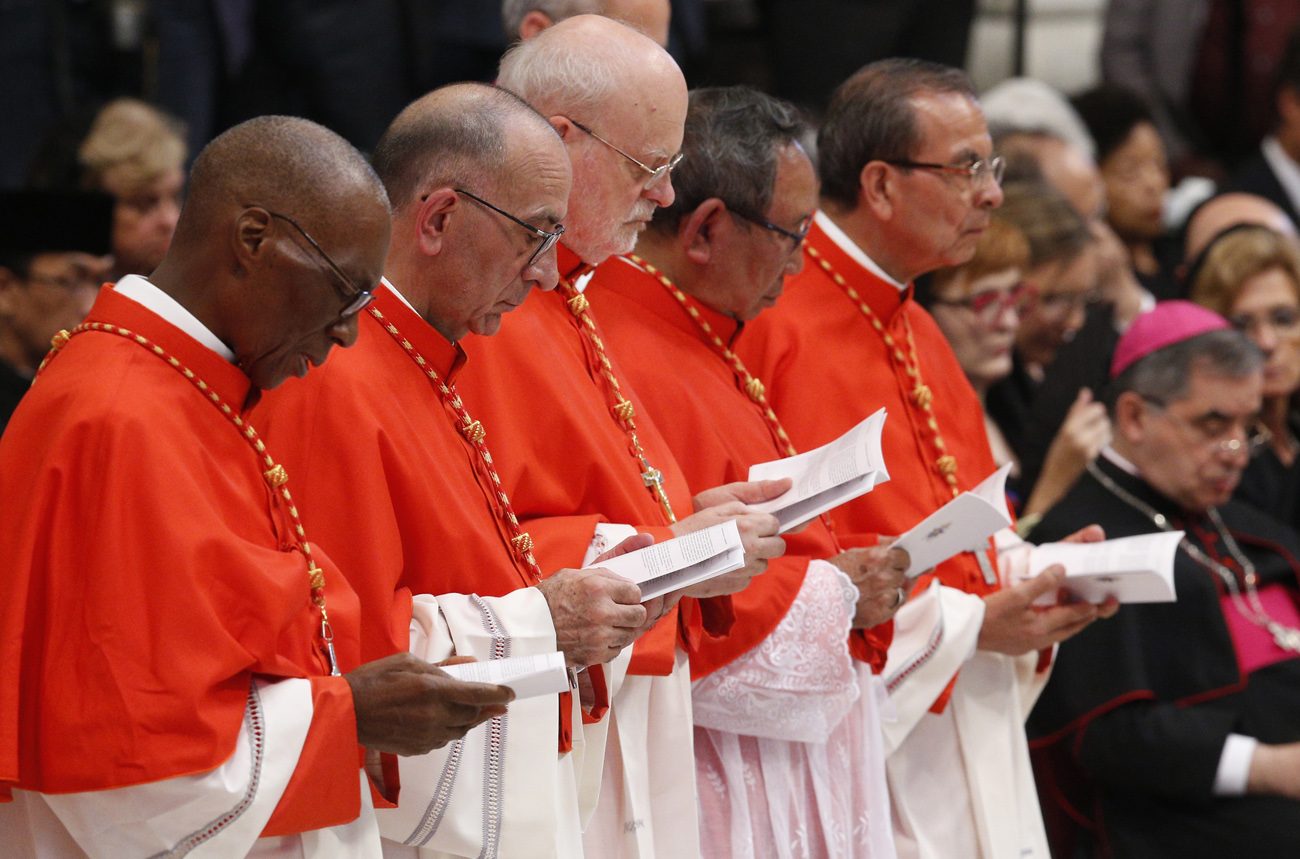 VATICAN CITY (CNS) — Cardinals are not called to be “princes” of the church, but to serve the people of God and tackle the sins of the world, Pope Francis told five new cardinals.

Jesus “calls you to serve like him and with him, to serve the father and your brothers and sisters,” the pope said as he created five new cardinals from five nations June 28.

After reciting the Creed and taking an oath of fidelity to Pope Francis and his successors, each cardinal — in his new red robes — went up to Pope Francis and knelt before him. The pope gave them each a cardinal’s ring, a red skullcap and a red three-cornered red hat.

The crimson hue the cardinals wear is a reminder that they must be courageous and faithful to Christ, his church and the pope to the point of shedding blood, if necessary.

They also received a scroll attesting to their appointment as cardinals and containing the name of their “titular church” in Rome. The assignment of a church is a sign they now are members of the clergy of the pope’s diocese.

After the consistory, Pope Francis and the new cardinals were scheduled to visit retired Pope Benedict XVI in the Mater Ecclesiae Monastery, his residence in the Vatican gardens.

The Gospel reading at the consistory was St. Mark’s account of James’ and John’s pride and ambition to have a position of power and be honored, and how the other disciples reacted with angry jealousy (Mk 10:32-45).

Jesus corrects his disciples, explaining that pagan leaders are the ones who lord their authority over their people, and “it shall not be so among you.” The pope said the cardinals, as leaders like Christ, are there to be slaves and serve others.

The Gospel reading, he said, shows how Jesus asked his disciples to “look at reality, not let yourselves be distracted by other interests or prospects.”

The reality is always the cross, he said, and the sins the cardinals must face today include: “the innocent who suffer and die as victims of war and terrorism; the forms of enslavement that continue to violate human dignity even in the age of human rights; the refugee camps, which at times seem more like a hell than a purgatory; the systematic discarding of all that is no longer useful, people included.”

Jesus “has not called you to become ‘princes’ of the church, to ‘sit at his right or at his left,'” the pope told the new cardinals. “He calls you to serve like him and with him.”

The evening before he was to enter the College of Cardinals, Cardinal Arborelius had just picked up his new red vestments, but had not had a chance to try them on. “I hope they will fit,” he said.

The Swedish cardinal told Catholic News Service that about 450 people from Sweden had planned to travel to Rome for the consistory, including the leaders of the Lutheran, Syrian Orthodox and Baptist churches in Sweden. The Catholic contingent included a large group of Chaldean Catholics who emigrated from Iraq to Sweden. But, he said, there also was a big group of Salvadorans living in Sweden who were traveling to Rome to celebrate the red hat of Cardinal Rosa Chavez.

The Salvadoran auxiliary bishop was a friend of and mentored by Blessed Oscar Romero, who was assassinated in 1980. The new cardinal’s loyalty to the memory of the Blessed Romero and to the memory of his country’s sufferings is reflected in his coat of arms, which features a sprig of rosemary because in Spanish “Romero” also means rosemary, a palm frond as a symbol of the Salvadoran church’s persecution and martyrdom, and a hand grabbing another hand, a symbol of the church’s option for the poor.

When Cardinal Omella was asked how his life would change as a cardinal, he told reporters, “I think the tree is already fully grown. I will hardly change, I will be the same person.”

“I don’t see the cardinalate as major upgrade, of importance or climbing up to some honorable position,” he said. “What is asked of me now is a greater service to the church, but in the way taught by Pope Francis, who goes to wash the feet of prisoners.”

Serving the people of God and society, Spain’s new cardinal said, “demands dying to one’s self; it is difficult to be available every day, but it must be done with generosity.”

Cardinal Ling experienced persecution first hand. After Laos became a communist nation, he set off — without government permission — to preach the Gospel in small villages and in prisons, according to his Vatican biography. He was arrested in 1984 and accused of “making propaganda for Jesus.”

The new cardinal was imprisoned for three years, “with chains on my arms and my legs,” he said.

But being a prisoner was “an apostolate,” he said. “My presence (in prison) was necessary for my conversion and purification and also for that of others.”

At the end of the consistory, the College of Cardinals had 225 members, 121 of whom are under the age of 80 and eligible to vote in a conclave to elect a pope.

Contributing to this story were Cindy Wooden and Junno Arocho Esteves in Rome, and Rhina Guidos in Washington. 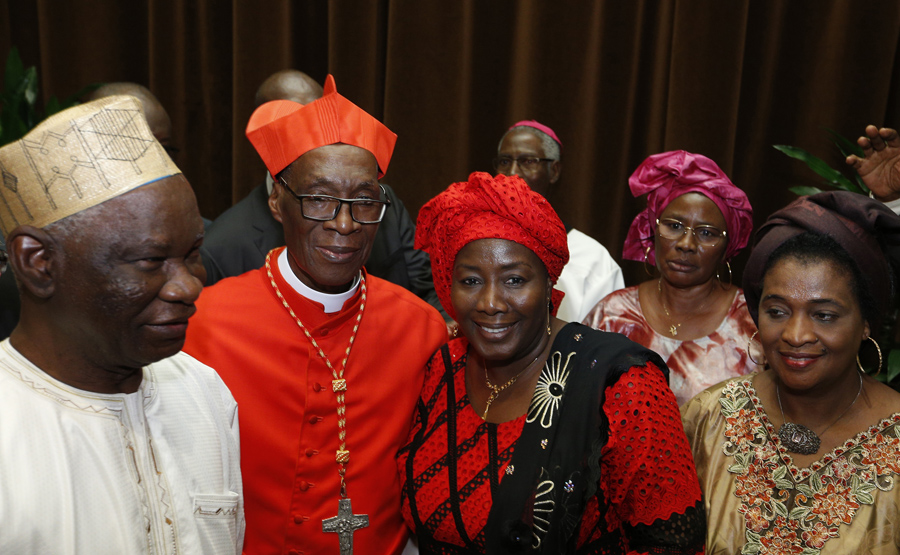 Cardinal Jean Zerbo of Bamako, Mali, poses for photos after Pope Francis elevated him and four other men to cardinal during a June 28 consistory in St. Peter’s Basilica at the Vatican. (CNS photo/Paul Haring)

NEXT: Cardinal Pell will face sexual abuse charges in Australia