Campuses cannot be ‘echo chambers’ for one viewpoint, say observers 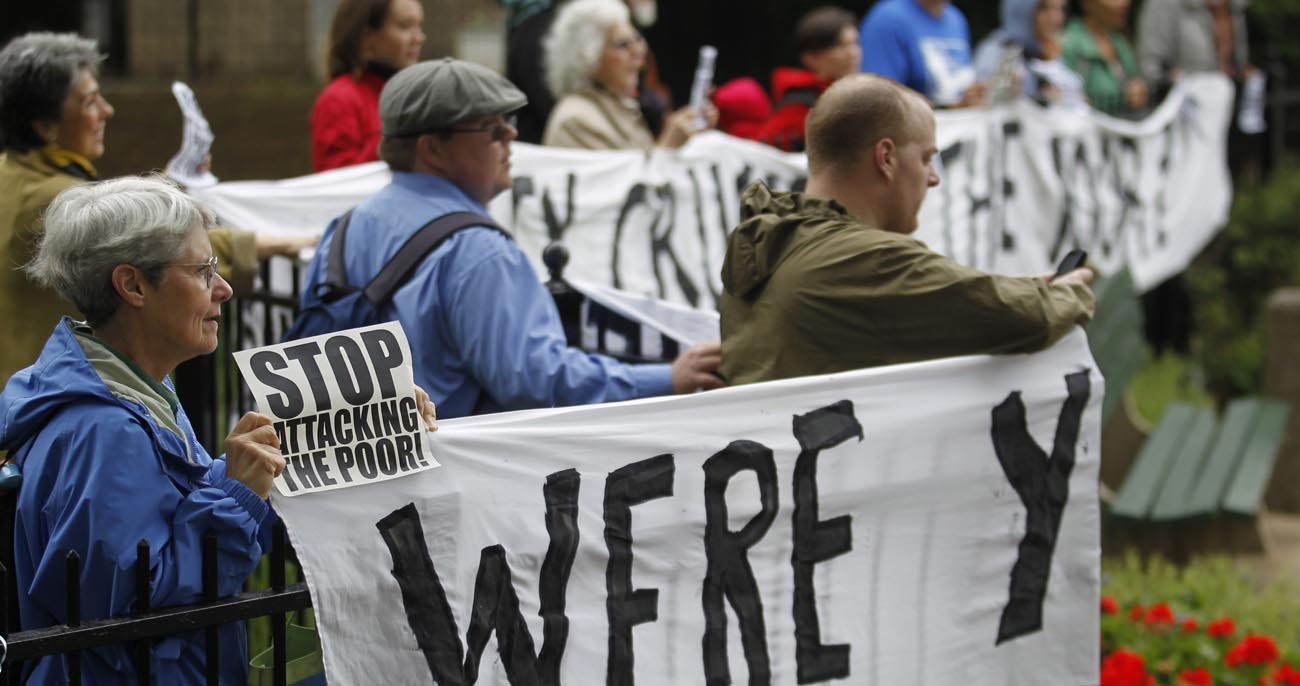 Protesters gather outside Georgetown University as Rep. Paul Ryan, R-Wis. speaks in 2012 at the university in Washington. Several violent incidents involving controversial speakers at universities this year prompted the Senate Judiciary Committee to have a hearing in June on free speech on college campuses. (CNS photo/Bob Roller)

WASHINGTON (CNS) — In the wake of several violent incidents involving controversial speakers at universities this year, the Senate Judiciary Committee held a hearing June 20 on free speech on college campuses.

This issue also prompted Catholic News Service to interview several Catholic observers and leaders in higher education who emphasized the importance of civility and dialogue in a time of violence and intolerance.

The hearing was titled “Free Speech 101: The Assault on the First Amendment on College Campuses” and centered on the topics of free speech, intellectual freedom and the dangers they face on college campuses. Several people gave testimony, including two current students.

“I adamantly believe that students should be encouraged to engage with people and ideas they vehemently disagree with,” Wood said in his written testimony.

Wood warned of the dangers of a campus that is an echo chamber, in which one view dominates and dictates the intellectual climate of the university.

Jesuit Father Michael Sheeran is no stranger to higher education. He is president of the Association of Jesuit Colleges and Universities, based in Washington, and before that was at Regis University in Denver for 40 years, serving as president the last 19 years of his tenure there.

Tracing the tradition of civility in education from Aristotle and Cicero’s classical works through Cardinal John Henry Newman’s “Idea of a University,” Father Sheeran explained that Aristotle’s conception of man as a social creature complements Cardinal Newman’s conception of a gentleman as one who never inflicts pain upon another. In the last half of the 20th century, however, Father Sheeran described a diverging trend in conduct.

“Thanks, I think, to the media and the internet, it has become OK to exaggerate, to lie, to insult, to provoke, all justified under free speech,” Father Sheeran told CNS in a phone interview.

To counter this, Father Sheeran advocates for a return to the civility of tradition.

“Universities need to teach students the tradition that has been destroyed over the period since the 20th century,” Father Sheeran said. “Faculty need to model civility in the classroom, not to belittle approaches to their academic discipline that they disagree with.”

Gerard Powers, director of Catholic Peacebuilding Studies for the Kroc Institute for International Peace Studies at the University of Notre Dame, also emphasized the importance of listening to opinions that may contradict one’s own and acknowledged the problem of echo chambers.

“You look for the facts that enforce your beliefs,” Powers told CNS in a phone interview.

“I think all of us have a problem with being in our little echo chambers and silos,” said Powers, who also is coordinator of the Catholic Peacebuilding Network based at Notre Dame.

“I don’t think it’s healthy, honestly, to just be engaged with people who think like you, or who only believe in what you believe in,” the Sister of Notre Dame de Namur told CNS. “I think that’s myopic.”

To escape these echo chambers, Powers proposes both having confidence in one’s own moral values and being willing to dialogue with those with whom one disagrees.

“It’s a combination of rootedness, a deep sense of who you are and what you believe in, your own moral compass, as well as a cultivation of your own humility,” Powers said.

Sister Patricia shared some of the approaches that her organization is bringing to the dynamic of campus dialogue.

“We’re doing a lot of work with some of the college students, again, around some of these same issues, whether it’s related to sexual orientation or whether it’s related to conflict on campuses,” Sister Patricia said. “We’re actually saying to folks, ‘Let’s talk about it. Let’s identity the elephant that’s in the room and let’s begin to unpeel it, and let’s move to a deeper level of conversation, and not be afraid to go there.'”

John Carr, director of the Initiative on Catholic Social Thought and Public Life at Georgetown University, joked that people should delete their friends on Facebook in order to exit their echo chambers. Carr further stressed the universal nature of Catholicism, indicating that being an active member of the church should involve an open-minded approach to dialogue.

“We’re called to renew the earth, to change society, and I don’t think you do that from an island,” Carr told CNS.

It is important, Carr said, to try to anticipate the concerns that others hold rather than giving into the temptation to view them as bigoted, dangerous or disrespectful.

“That’s the antithesis of what a college education and a college campus could be,” Carr said.

“I think college campuses ought to be a place where you discover yourself, you deepen your faith and your convictions, but you also learn to listen to other people and frankly have some of your assumptions challenged,” Carr said. “If that doesn’t happen, it’s not a full education, certainly not a Catholic education.”

Carr stressed that the best way to make one’s case is not by preaching to the choir but rather through engaging and persuading, all the while maintaining one’s rootedness in his or her stances.

“I frankly think our ideas, our principles are so powerful, that they can win most arguments, so we’re better served by an open discussion rather than sort of batting down the hatches,” Carr said.

How can students, professors and the population at large go about reclaiming civility? Carr and Sister Patricia both offered peaceful solutions and expressed hope for the future of dialogue on college campuses.

“‘I could be wrong about this’ is a great place to begin a conversation, and then state your convictions clearly without challenging other people’s motives,” Carr said. “Secondly, to do so with respect with other people. That not only is an appropriate way to treat people, that’s also the best way to make your case.”

“I see college students coming together and really wanting to understand where each other is coming from, and wanting to find a way to build community, and to do it in a way that’s accountable, and responsible, and valuing the human dignity of every single person,” Sister Patricia said. “So I’m excited when I’m seeing the millennials and the young adults coming together and standing up, and showing up, and doing it in nonviolent ways.”

NEXT: Black Catholics at congress urged to ‘listen, learn, think, act and pray’