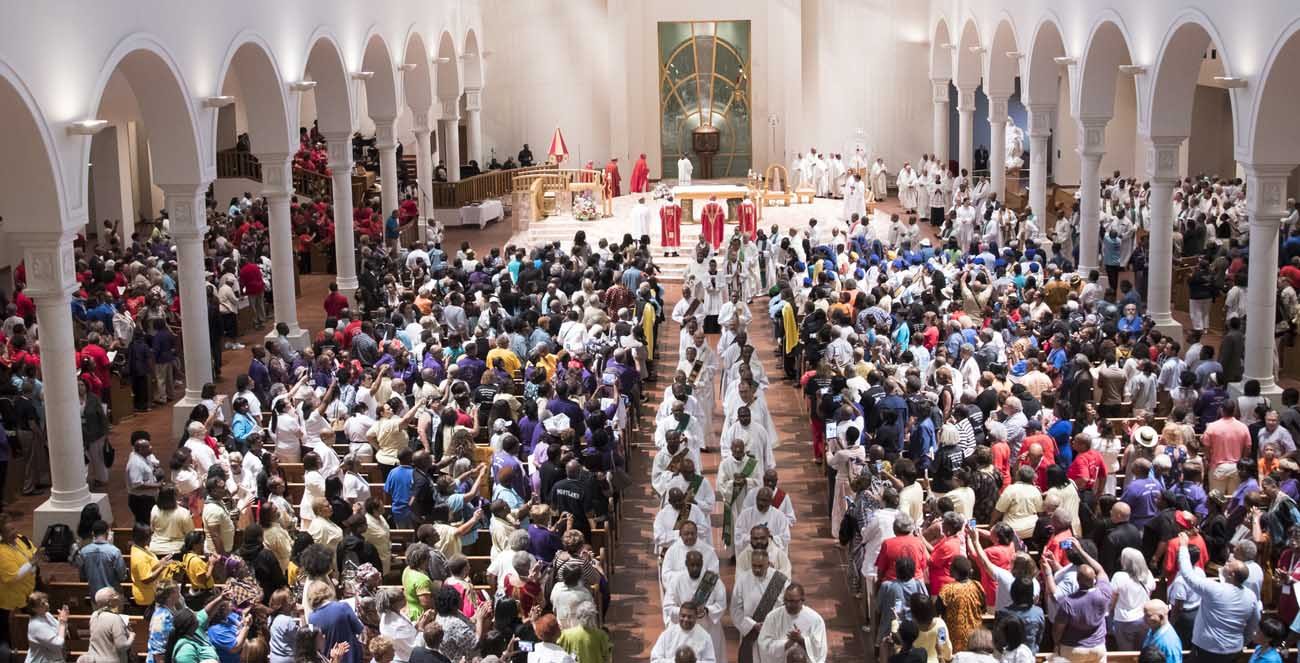 More than 2,000 converged on Orlando July 6-9 for the 12th National Black Catholic Congress where speakers — clergy, lay and religious — addressed a variety of topics and concerns facing black communities and families, while urging those present to take an active, enthusiastic role in living out the Gospel as just disciples of Christ.

During his homily at the opening Mass at the Basilica of the National Shrine of Mary, Queen of the Universe, Father Patrick Smith, pastor of St. Augustine Parish in Washington, spoke about the “ridiculous power of the Christ on the cross” and how our own suffering can be offered up to God as a source of healing for others.

It is important the community does talk about its struggles, the priest said, but it also must talk about the redemptive power of God on the cross. He added while “racism ultimately leads to death … a spiritual suicide in our souls,” the truths of the Gospel sets lives free.

“That is our anger, but also our source of hope,” he said. “You and I cannot appreciate the good news unless we first face and acknowledge the bad news.”

The roots of the Black Catholic Congress stem from 1889 with layman and journalist Daniel Rudd, who brought together 100 black Catholic men to exchange and discuss questions affecting their race for not just Catholic blacks, but blacks across the country, and unite for a course of action while standing behind the Catholic Church and its values.

The group met with President Grover Cleveland during its first congress. In meeting and uniting, Father Smith said the Catholic Church demonstrated and voiced how “black Catholic lives mattered,” just as other groups have done as they convened when a group has suffered, such as with the pro-life groups who proclaim unborn lives matter.

“Black Catholics are born from the same womb of the baptismal font,” Father Smith said, adding that those gathered for the congress did not convene to achieve higher status, but rather to insist on “inclusion” because black Catholics are equal members of the body of Christ.

“And also, more importantly, (we gather) to extort and challenge ourselves to do our part and accept the responsibility in our role in the Church that God has given us. … We gather to see how to effectively evangelize because eternal life is way too important.”

Ghanaian Cardinal Peter Turkson, prefect of the Vatican Dicastery for Promoting Integral Human Development, offered the opening keynote address that focused directly on the theme of the congress taken from the prophet Micah — “The Spirit of the Lord is upon me: Act justly, love goodness and walk humbly with your God.”

His first point reaffirmed the united community of disciples of Christ and the need of inclusion of all “children of God.”

To demonstrate the power of being a disciple of Christ, Cardinal Turkson spoke about the story from Exodus of the Israelites following Moses in the desert. He asked those gathered to envision facing the Red Sea with the waters of parted and a path sandwiched between two walls of water.

The cardinal joked “water is never concrete” and some might have questioned what would happen if there was a really big wind. But the example of the Israelites who choose to follow Moses and trust God to hold up the walls of water demonstrates the courage and attitude that modern-day Christians must hold to be baptized in Christ and become just disciples of Christ.

“That is what baptism is. It is not a nominal celebration. It is a decision to live dependent on making Jesus your everything,” Cardinal Turkson said, borrowing the words of St. Paul who said after his conversion, “The life I live now is no longer mine.” “Anyone baptized lives that life. … It is not until you surrender your life to Jesus that you will live as a just disciple of Christ.”

Justice, reconciliation and peace are tantamount to unite the church family of God. While Cardinal Turkson said challenges such as tribalism in Africa and racism and discrimination in America present struggles, the Catholic Church family is invited to live beyond divisions and live in communion as children of God.

“In this family of God we need to live justly,” he said. “When we respect the demands of our relationships, we are just.”

NEXT: A different type of immigrant: Boston parish ministers to Brazilians