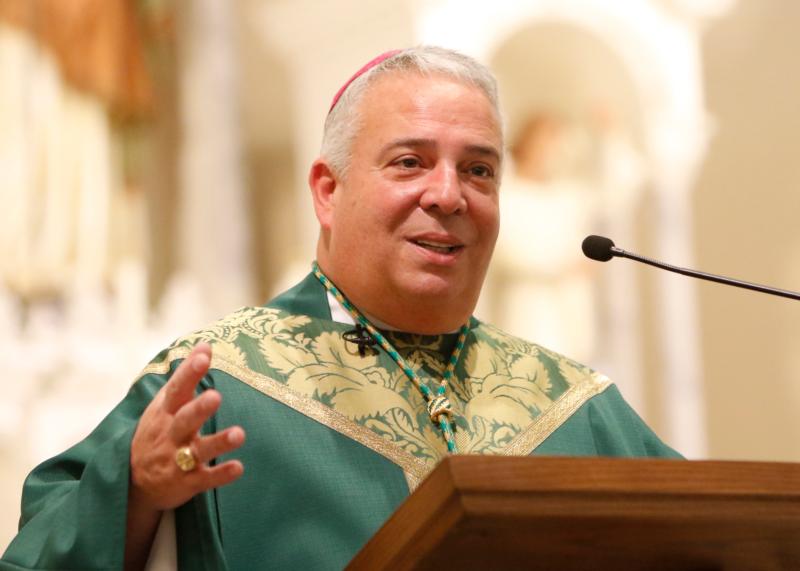 The pope also has named Vincentian Father Andrew Bellisario, currently serving in the Archdiocese of Anchorage, Alaska, to head the Diocese of Juneau, Alaska.

The appointments were announced in Washington July 11 by Archbishop Christophe Pierre, apostolic nuncio to the United States.

Bishop Perez, 56, succeeds Bishop Richard G. Lennon, who resigned in December at age 70 citing health reasons. Bishop Perez has been an auxiliary bishop of Rockville Centre since 2012. He is vicar for the diocese’s Hispanic Apostolate.

Bishop-designate Bellisario, 60, succeeds Bishop Edward J. Burns, now head of the Diocese of Dallas. Since 2015, the Vincentian priest has served Hispanic Catholics in the Anchorage Archdiocese. He is a former provincial of his religious congregation’s Western U.S. province.

During his introduction to the diocese and the media at the Cathedral of St. John the Evangelist July 11, Bishop Perez said he was “absolutely thrilled” to come to Cleveland to lead a church with many rich ethnic cultures.

“I’ve been getting texts and calls and emails since 6 o’clock this morning. Thank God I got up early,” he said. “And they all had this theme: ‘Congratulations and Cleveland rocks!'”

Bishop Perez said that the 677,000 Catholics in the eight counties of the diocese show that the church in Northeast Ohio remains vibrant and alive. He said he looked forward to working alongside the faithful as missionary disciples, as Pope Francis calls the faithful to be.

“I hope that these 670,000 missionary disciples will go out, each one of them, and call more people to get to know Jesus Christ and love the church,” Bishop Perez said. “Those 670,000 people that make up this local church, our church, my church, is all potential. And we have to be joyful and excited and enthusiastic about that.”

Bishop Perez was warmly welcomed by Bishop Daniel E. Thomas of Toledo, Ohio, who has served as apostolic administrator of the Cleveland Diocese since Bishop Lennon’s retirement. Both share a connection with the Archdiocese of Philadelphia, where they served as priests in the past.

In statement from Philadelphia, Archbishop Charles Chaput said Bishop Perez “has a joyful, warm and down-to-earth personality as well as a deep love for the priesthood and a tireless devotion to his ministry. He’s been much loved by all those he has served and wherever he has served. The faithful of the Diocese of Cleveland are receiving a wonderful gift from the Holy Father in the person of Bishop Perez.

“His wide-ranging pastoral and administrative experience among diverse communities makes him well prepared to shepherd a diocese of his own. I’m confident that Bishop Perez will carry on the work of his predecessors with great energy, compassion, zeal and fidelity.

“As he prepares to begin his new ministry,” said the archbishop, “I offer Bishop Perez heartfelt congratulations on behalf of the priests, deacons, religious, and lay faithful of the Archdiocese of Philadelphia. I ask that all people of good will join me in praying that the Holy Spirit will continue to strengthen him as a successor to the Apostles.”

The new bishop also expressed gratitude to the Diocese of Rockville Centre’s leaders, retired Bishop William F. Murphy, and the diocese’s current bishop, Bishop John O. Barres, for guiding him during his five years as an auxiliary bishop in the diocese. “Both have helped me to learn how I can imitate their love for the church,” he said.

In his opening remarks, he addressed offered a few words in Spanish to Cleveland’s Latino Catholics. He recapped his background including his work in evangelization and ministry to Hispanics throughout his priesthood.

Bishop Perez will be installed as the 11th bishop of Cleveland Sept. 5.

He was born in Miami in 1961, the son of Cuban parents. He briefly described how his parents fled their homeland in 1960 because of restrictions on their freedom under the regime of Fidel Castro. The Perez family moved to New Jersey a few years later when the bishop was a child.

Bishop Perez graduated from Montclair State University in New Jersey with a bachelor degree in psychology. He taught for a year at Colegio la Piedad, a Catholic elementary school in Puerto Rico, before entering St. Charles Borromeo Seminary in Philadelphia to study for the priesthood.

Ordained in 1989 as a priest of the Archdiocese of Philadelphia, Bishop Perez served as a parochial vicar in one parish and pastor of two others. He also was the founding director of the Catholic Institute for Evangelization, an archdiocesan office for adult faith formation development and lay ministry training. In addition, he served as assistant director of the Office for Hispanic Catholics of the archdiocese.

In 2012, he was appointed auxiliary bishop of the Rockville Centre Diocese. There, he was a member of the Corporate Board of Directors for Catholic Health Services, vice chair of Catholic Charities, and served on the Priests Personnel Board, Presbyteral Council and Diocesan Advisory Committee for Hispanic Ministry.

He is chairman of the U.S. Conference of Catholic Bishops’ Subcommittee on Hispanic Affairs and is a former member of the bishops’ subcommittee overseeing the Catholic Campaign for Human Development.

At a mid-morning introduction at St. Ann’s Hall at the diocesan Cathedral of the Blessed Virgin Mary in Juneau, Bishop-designate Bellisario said he was surprised to learn Pope Francis wanted to appoint him to the Southeast Alaska diocese the last week of June by Archbishop Pierre.

“Totally stunned and floored was I to the point that I was having trouble breathing,” he told diocesan staff. “Yet the grace of God was in the exchange, the Holy Spirit I believe because once I was able to catch my breath, I was able to say emphatically and completely ‘Yes.'”

Bishop-designate Bellisario said he wrote a letter of acceptance to Pope Francis and shared the words of St. Vincent de Paul, who founded the religious order to which he belongs: “St. Vincent told the members of what he called his little company … ‘Let us love God, my brothers. Let us love God but let it be with the sweat of our brows.’

“I now declare that it is with the strength of my arms and the sweat of my brow that I completely dedicate myself to serving you,” the newly named bishop said.

He also recalled his upbringing in southern California by Depression-era parents, who came to the U.S. from Italy. He said his parents, Rocky and Mildred, stressed the importance of helping others who were less fortunate.

As immigrants, his parents faced “were treated unfortunately the way that immigrants are treated today,” he said, adding that their devotion to the Catholic faith helped inspire his vocation to the priesthood as a Vincentian.

A native of Los Angeles, the bishop-designate was ordained in 1984. After ordination he served on the staff of St. Vincent’s Seminary in Montebello, California, first as assistant dean of students and then dean of students.

He served in parish ministry in California from 1986 through 1998 before becoming director of the De Paul Evangelization Center in Montebello. In 2002, he began an eight-year period as superior of the Vincentians’ Province of the West.

Beginning in 2003, he also took on added responsibilities as director of the Daughters of Charity of St. Vincent de Paul, Province of Los Altos Hills, California. In 2015, Bishop-designate Bellisario headed north to Alaska to serve as superior of the International Mission of the Vincentians and parochial vicar of St. Anthony Parish in Anchorage. After a year he became pastor of Our Lady of Guadalupe Co-Cathedral in Anchorage.

His episcopal ordination was set for Oct. 10.

NEXT: Campuses cannot be ‘echo chambers’ for one viewpoint, say observers