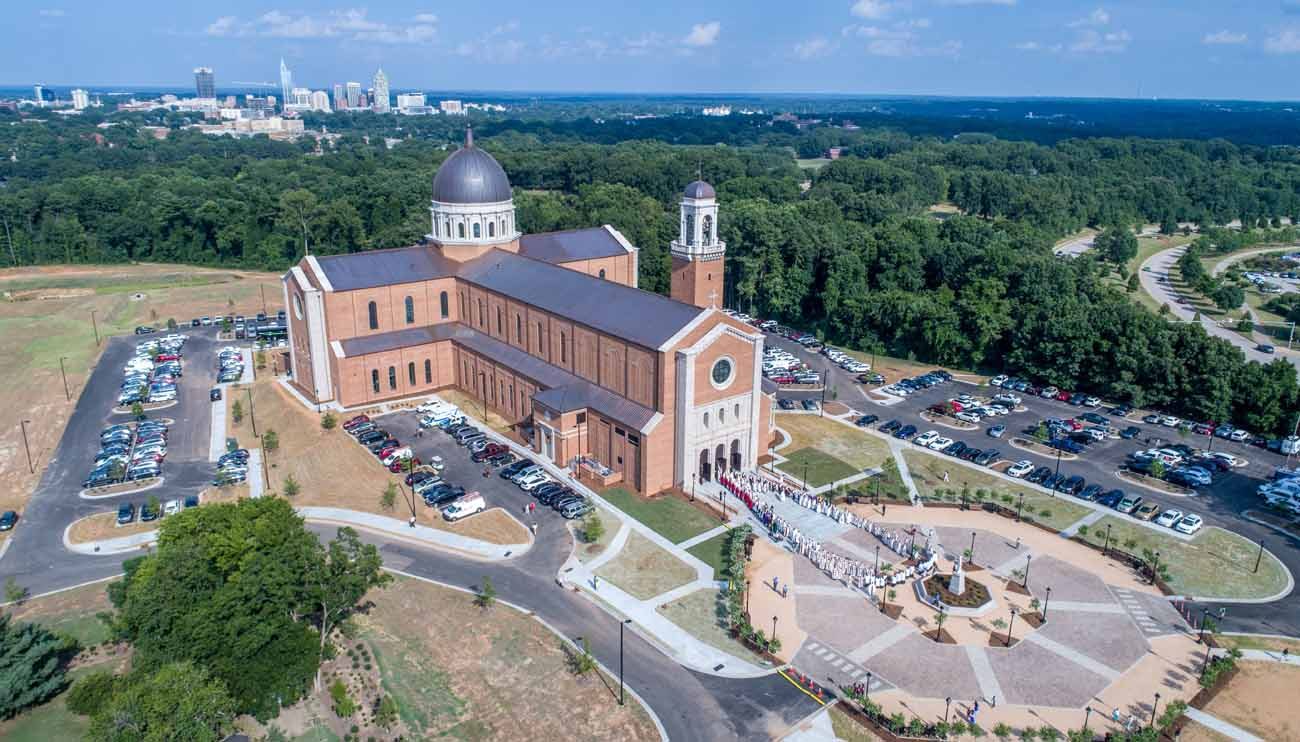 Priests gather outside Holy Name of Jesus Cathedral immediately after Mass July 26 at the dedication for the cathedral in Raleigh, N.C. (CNS photo/JFlyBoy Photo & Media, courtesy Diocese of Raleigh)

RALEIGH, N.C. (CNS) — The Diocese of Raleigh began the day with the smallest Catholic cathedral in the continental United States. But when the July 26 dedication of a new cathedral concluded, the diocese was home to one of the largest in the country.

Bishop Michael F. Burbidge said of Holy Name of Jesus Cathedral, “(People) are going to walk into this cathedral to gather around this altar … from which they will receive the bread of life and the cup of salvation. This is our home. This is our mother church … that will allow us to gather in great numbers.”

Holy Name of Jesus Cathedral, located in Raleigh, measures 44,000 square feet and has a seating capacity of 2,000.

Bishop Burbidge, currently bishop of the Diocese of Arlington, Virginia, served as Raleigh’s bishop during most of the project to design and build the cathedral, and was principal celebrant at the dedication Mass.

(Watch the video below of the dedication of the cathedral, courtesy of the Raleigh Diocese.)

More than 130 priests, 50 deacons and 15 seminarians attended the Mass. It began with the entrance hymn “I Will Praise Your Name Forever,” an original, 10-verse piece composed by Michael Accurso, director of liturgical music for the diocese. Based on Psalm 145, the hymn was sung in English, French, Spanish, Vietnamese, Igbo, Korean, Tagalog, Latin and Swahili. 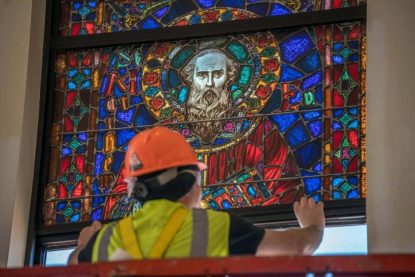 One of 45 restored windows from the former Ascension of Our Lord Church, a parish in Philadelphia’s Kensington section that closed in 2012, is installed in the Holy Name of Jesus Cathedral in Raleigh in March 2017. (Courtesy of the Catholic Diocese of Raleigh)

More than 20 musicians and 70 choristers were responsible for the harmonious sounds that emanated from the choir loft. The procession included a Knights of Columbus honor guard, composed of more than 30 Knights from throughout the diocese.

The Mass included a ceremonial passing of a key to the cathedral. Representatives involved in the building of the cathedral presented a key to Bishop Burbidge, who, in turn, passed it to his successor, Bishop Zarama.

Archbishop Pierre read an official letter from the Vatican designating Holy Name of Jesus Cathedral as the mother church for the diocese. Dedicated in 1924, Sacred Heart, a 300-seat church in downtown Raleigh, previously served in that role.

“May your lives each day reveal the handiwork of God’s grace,” Archbishop Pierre said to the faithful.

As part of the dedication Mass, Bishop Burbidge blessed water, which he later used to sprinkle the congregation and purify both the walls and altar of the new cathedral.

“Bless this water; sanctify it,” he prayed. “As it is sprinkled upon us and throughout this church make it a sign of the saving waters of baptism. … May all here today, and all those in days to come, who will celebrate your mysteries in this church, be united at last in the holy city of your peace.”

In his homily, Bishop Burbidge spoke about the name of the new cathedral, noting that the property it sits on was once home to a Catholic orphanage. That orphanage had a chapel named Holy Name of Jesus.

“We knew that had to be the name,” Bishop Burbidge said.

He spoke about God’s holy name, urging the people of the diocese to always hold it in reverence. “I firmly believe that reverence for God’s holy name — never to be taken in vain — is a witness we all need to offer society now more than ever,” he said. “Dear Diocese of Raleigh, please renew that commitment today.”

Bishop Burbidge shared an experience he had Dec. 9, 2015, when he represented the diocese and presented the cathedral’s cornerstone to Pope Francis for a blessing.

In a lighthearted moment, he shared a challenge from that day. “The hardest part was trying to explain to the Swiss guard what I had in my hands,” he laughed, as the congregation joined in laughter.

“That cornerstone, now situated in our building, is a reminder of the truth we heard today (in Scripture),” he continued. “Our faith is built on a foundation … with Jesus Christ as the capstone.”

The rite of dedication began with the litany of the saints, followed by relics brought forward for the altars by former cathedral rectors Msgr. Shugrue, Msgr. Jerry Lewis, Msgr. Jerry Sherba and Father Daniel Oschwald and the current rector, Passionist Father Justin Kerber.

Bishop Burbidge enclosed the relics into the main altar, while Bishop Bernard E. “Ned” Shlesinger III, newly ordained auxiliary bishop of Atlanta and former Raleigh priest, did the same in the cathedral’s chapel. In all, 21 relics were deposited.

The prayer of dedication was offered, and those in attendance gave a resounding Amen to the bishop’s words.

Clad with a simple white waist apron over his chasuble, Bishop Burbidge rolled up his sleeves and anointed the main altar and church building with sacred chrism; Bishop Shlesinger anointed the chapel altar.

Bishop Burbidge anointed the walls in the form of a cross at 12 points throughout the cathedral. Incensing and lighting of the altar and the church followed.

About a dozen members of the parish and Catholic Center staff dressed the altar with linens and the sanctuary with floral arrangements that included greenery and white hydrangea. Five gift bearers, including a man who once lived at the orphanage that was formerly on the property, presented the gifts.

Many Massgoers were moved to tears at moments, especially as a single beam of sunlight shined exclusively on the crucifix during Communion.

One attendee, Ginger Ward-Presson, a parishioner at Our Lady of Lourdes, said the Mass was the most beautiful she had ever attended.

“This was unbelievable … magnificent. In fact, it brings tears to your eyes. There were many moments, especially with the orchestra … I just think no words can describe it,” she told NC Catholics, Raleigh’s diocesan magazine. “I think the liturgy was beautiful, touching, reflective. Just to be able experience this kind of liturgy, it’s momentous and also elegant and gracious. I think the cathedral is everything the bishop talked about and beyond.”

Turgeon Watson is the editor of NC Catholics, the magazine of the Diocese of Raleigh. 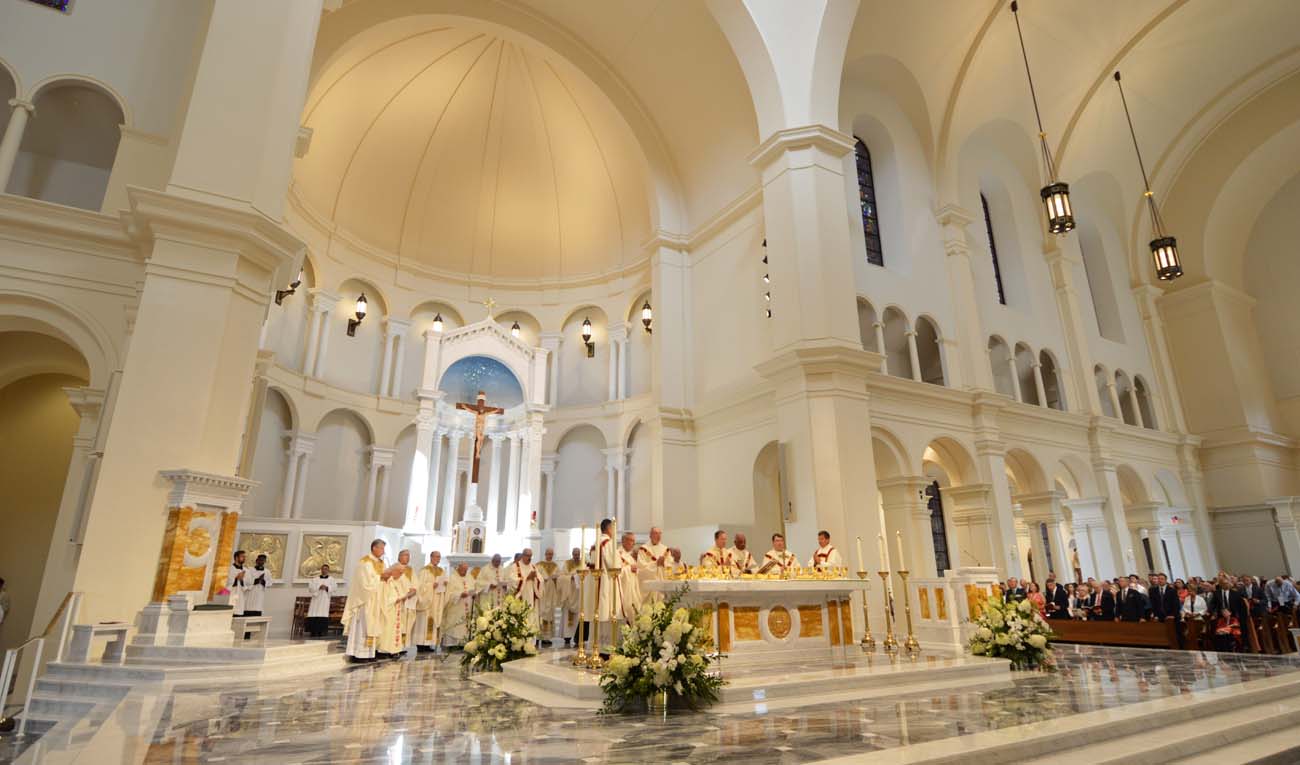