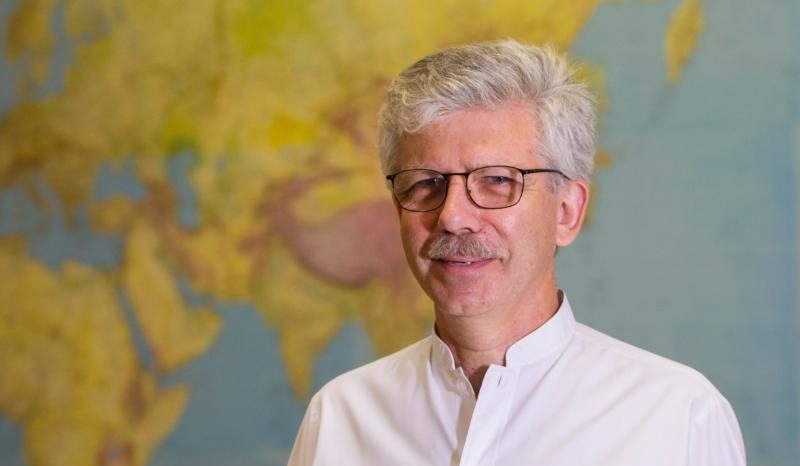 Michel Roy, secretary general of Caritas Internationalis, speaks about “Sharing the Journey,” a campaign that will begin in late September to encourage people to meet with and listen to migrants and refugees. Roy was interviewed July 27 in his Vatican office. (CNS photo/Robert Duncan)

VATICAN CITY (CNS) — No matter the position one takes on national migration policy, Pope Francis, Caritas Internationalis and national Catholic charities across the globe want Catholics to meet a migrant or refugee and listen to his or her story.

In late September, Pope Francis will launch the “Share the Journey” campaign, a two-year program of Caritas Internationalis to promote encounters between people on the move and people living in the countries they are leaving, passing through or arriving in.

Meeting migrants and refugees and listening to their stories — and having them listen to the stories of people in their host communities — mean the walls people have erected in their minds and hearts should begin to fall, said Michel Roy, secretary general of Caritas Internationalis.

“You may be afraid of migrants as a large group of people coming in, but when you meet a migrant, then you have a different vision,” he said July 27. Listening to their stories makes it clear that “they are human beings, they are human beings who have suffered much; they’ve left a situation where they could not live anymore because of violence, conflict or just because of misery.”

“Once you understand the story of the person, then you will have a different attitude,” he said.

Most people who vote for political parties espousing anti-immigrant sentiments, Roy believes, “have never met a migrant,” which makes it easy for politicians to convince them that they have something to fear.

Even if the person does not change their mind about the most appropriate political policies for regulating migration, he said, it is necessary to make the fear subside by helping folks get to know the real people who have left all behind because of persecution, violence or extreme poverty.

Cardinal Luis Antonio Tagle of Manila, Philippines, president of Caritas Internationalis, wrote a letter in late June asking members of the Caritas federation to participate in the campaign. He said, “One of the most important questions we can ask ourselves as individuals, communities and countries at this time of mass movements of people and global doubt is ‘Do I allow fear to prevail in my heart, or do I allow hope to reign?’

“Through ‘Share the Journey’ we hope to dispel fear and understand why so many people are leaving their homes at this time in history,” the cardinal wrote. “We also want to inspire communities to build relationships with refugees and migrants. We want to shine a light and lead the way. Migration is a very old story but our campaign aims to help communities see it with new eyes and an open heart.”

The “Share the Journey” campaign will run at least until 2019. The U.S. bishops’ Catholic Relief Services and Catholic Charities USA, as well as more than 160 other Caritas members around the world, will be sponsoring national and local events to provide opportunities for migrants and members of host communities to meet and share their stories.

Through his words and, especially, his gestures, Pope Francis “is inviting everyone on earth to be welcoming” and to protect migrants and help them integrate into the society of their new countries, Roy said. As a central institution of the church, he added, Caritas Internationalis promotes what Pope Francis is asking all Catholics to do.

“Catholics are not all convinced that we have to welcome migrants,” the secretary general acknowledged, “so I think we have work to do within the church itself.”

But, he said, the pope is asking “everyone to make a step,” and Caritas hopes that will begin with every Catholic being willing to meet a migrant or refugee.

NEXT: China tells mainland media how to refer to retired Hong Kong bishop