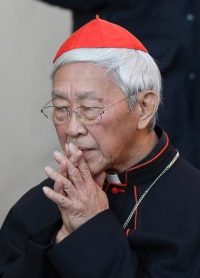 HONG KONG (CNS) — Chinese propaganda chiefs have ordered mainland journalists not to describe outspoken Cardinal Joseph Zen Ze-kiun as the “emeritus” bishop of Hong Kong, but to instead use the word “former.”

Ucanews.com reported that the new terminology on how to refer to Cardinal Zen was part of a broader list of words and phrases to be “banned or used with care,” which state-run Xinhua News Agency announced to media workers in China.

“‘Former bishop’ instead of ’emeritus bishop’ should be used to address Zen Ze-kiun and other retired bishops of the Hong Kong Catholic Diocese,” said point No. 48, according to the list posted by several Chinese media.

Since then, the cardinal has continued his advocacy efforts, and his willingness to get involved in debates over the territory’s political future has made him a favorite of pro-democracy groups in Hong Kong. Most recently he spoke about the communist government’s treatment of Liu Xiaobo, the Nobel Laureate who died July 13.

“Emeritus bishop. So, come and arrest me?” challenged a Catholic blogger on social media.

Another blogger said, “It is the church practice to call a retired bishop as emeritus bishop. It is a departure from reality to change the way of addressing.”

The first 45 points in the list of banned words in news coverage were released in November 2015. The revised list has been circulating since July 19, adding 57 more points and updated as of July 2016 — but only recently leaked to other media.

Cardinal Zen is the only Catholic figure named in the list. He is one of two religious figures whose names were spelled out, the other figure being Muhammad, the founder of Islam. The list reminded reporters to address the full name of people whose surname is also Muhammad, to distinguish them from the Prophet.

Five out of eight points on religions and ethnicity related to Islam, such as not to equate the Hui ethnic group as Muslim; not to use “kill” but “slaughter” of cattle by Muslims; and not to mention pigs in stories related to Muslim faith. These points were already part of the 2015 list.

NEXT: ‘We are bridge builders’: Maronite Catholic youth gather in Lebanon