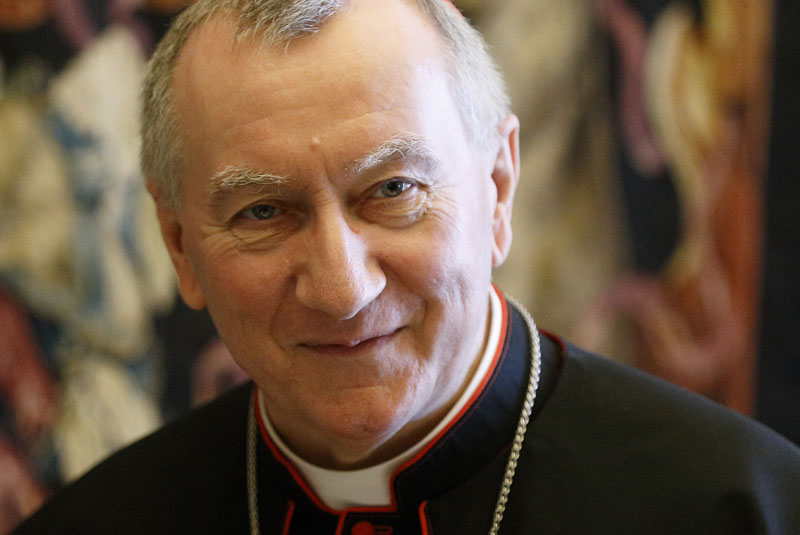 Cardinal Pietro Parolin, Vatican secretary of state, is pictured at the Vatican May 26. (CNS photo/Paul Haring)

VATICAN CITY (CNS) — Peace and an end to violent conflicts around the world should be placed above any national interests when it comes to the relationship between Western countries and Russia, Cardinal Pietro Parolin said.

Ahead of his visit to Russia at the end of August, the Vatican secretary of state said that differences between Russia and the West are often highlighted “as if they were different worlds, each with their own values, their own interests, a national or transnational pride, and even their own concept of international law to oppose others.”

“The effort to understand each other does not mean the yielding of one to the position of the other. It is rather a patient, constructive, frank, and at the same time, respectful dialogue,” Cardinal Parolin said in an interview with Il Regno, an Italian Catholic magazine, published July 27.

Calm, persistent efforts to promote understanding, he said, are “even more important on the questions which are at the origin of current conflicts and on those that risk provoking a further increase in tension.”

While recently “there has been a period of uncertainty” regarding Russia’s position on various issues, including on Syria, Cardinal Parolin said efforts to reach mutual understanding and discovering solutions to various world crises should “be placed above any national or, in any case, partisan interest.”

The Holy See, he added, will continue to encourage Russia and Western countries to engage in respectful dialogue instead of indulging in special interests which are a characteristic of “this age of a return to nationalisms” that distracts from averting “the possibility of catastrophe.”

“I am convinced that it is part of the Holy See’s mission to insist on this aspect,” Cardinal Parolin said.

The interviewer also asked the cardinal about the Holy See’s view of President Donald Trump. Cardinal Parolin said that the Trump administration is “so different and unique” that it will need “time to find its own balance.”

As for the Vatican’s view of his presidency, “time is needed to judge; you cannot be in a rush,” he said. “Any judgment now is hurried, even if sometimes the show of uncertainty itself can surprise.”

However, Cardinal Parolin expressed his hope that the United States and other countries will not change course “from their international responsibilities” on important global issues, especially the commitment to addressing climate change.

“Reducing global warming means saving the common home in which we all live and reducing the inequalities and poverty that the warming of the planet continues to produce,” he said.