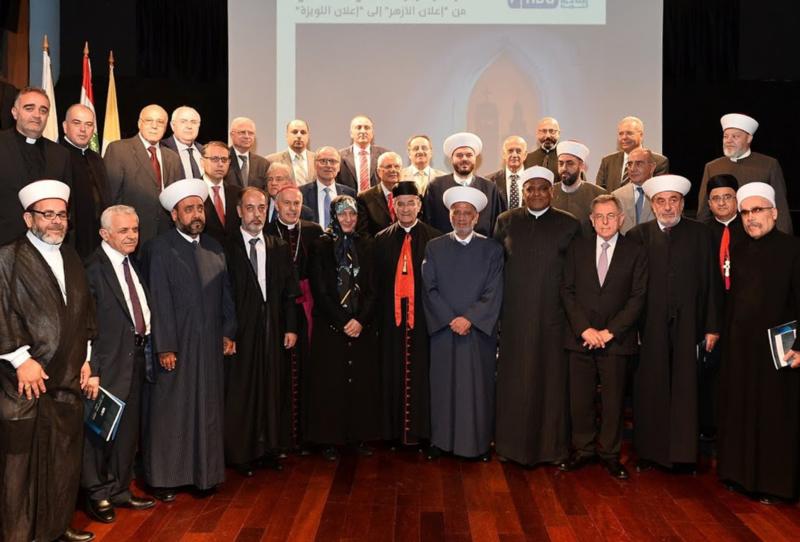 BEIRUT (CNS) — Top Christian and Muslim leaders and Lebanese government representatives agreed that Lebanon should be highlighted as an example of peaceful coexistence, noting that “the deepening of democracy in Lebanon sends a message of hope to the Arabs and to the world.”

They also reiterated calls for peace and various churches’ support for “the Palestinian people and their national rights” and for Christians to remain in the Holy Land.

The leaders met at Notre Dame University Louaize in Zouk Mosbeh, north of Beirut, July 1, for a follow-up to two events at Egypt’s al-Azhar University, Sunni Islam’s highest institute of learning. Addressing a peace conference at al-Azhar in April, Pope Francis emphasized that religion “is not a problem, but a part of the solution” because it helps people lift their hearts toward God “to learn how to build the city of man.”

In their final statement, conference participants declared their willingness to go to the Vatican and other Christian and Islamic world religious institutions “to cooperate and coordinate with them.” They also expressed “their desire to clarify the importance and challenges of a common living (Muslims and Christians) in Lebanon, which is the true guarantee of freedom, sovereignty and national independence.”

“Amid the tragedies of partition, displacement, forced population screening, ethnic cleansing, targeting of Christians by terrorist gangs — as happened in Egypt recently — and targeting others in Iraq and Syria, the dangers of sectarian strife and the escalating conflicts and wars in a number of Arab neighbors, the solidity of coexistence, and the deepening of democracy in Lebanon sends a message of hope to the Arabs and to the world,” they stated.

“We should do everything we can for Lebanon to remain aware of the seriousness and importance of the Lebanese experience and its relevance to the Arabs and to the international community in a strong and clear manner,” they added.

They cited St. John Paul II’s statement that “Lebanon is more than a country, it is a message of freedom and an example of pluralism for East and West.”

The conferees called for establishing Lebanon as an official international center of dialogue among religions, cultures and civilizations “to serve the Arab world and Christian-Muslim relations of the world.”

They urged Islamic and Christian educational institutions “to find formulas for deliberation, cooperation and openness in the educational curricula, and to consider developing joint programs that promote more mutual knowledge and acquaintance, creating an atmosphere of religious, national and human sharing.”

PREVIOUS: Pope: Hunger caused by ‘indifference of many, selfishness of a few’