Philippine bishops appeal for return to peace in south of country 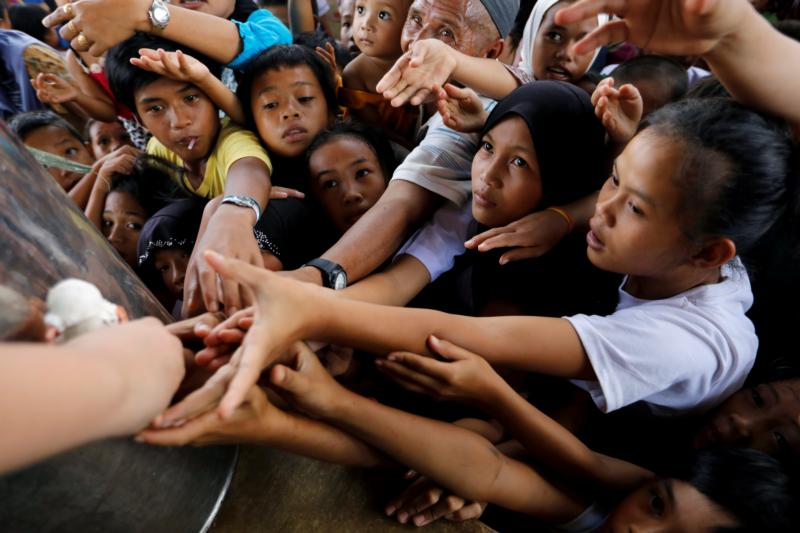 People reach to get ice cream July 5 at an evacuation center outside Marawi, Philippines, as army troops continue their assault against insurgents from the Maute group. (CNS photo/Jorge Silva, Reuters)

MANILA, Philippines (CNS) — The Philippine Catholic bishops appealed for a “return to normalcy and peace … as soon as possible,” as violence continues in the southern part of the country.

In a statement at the end of their biannual meeting July 10, the bishops appealed for dialogue with Muslims, “so that our various faiths may not be exploited and abused for the sake of terrorism or violent extremism,” reported ucanews.com.

The church leaders urged parents, schools, churches and mosques to “ensure that none may be lured by the recruitment efforts of terrorists.”

“Let us teach the young and the old that our faiths are meant for peace. No religion teaches the killing of innocent people, simply because they belong to another religion,” read the bishops’ statement.

The prelates also wondered whether martial law across the southern part of the country would ensure the return of peace.

Philippine President Rodrigo Duterte declared a 60-day state of martial law in Mindanao May 23 following an attack by gunmen, who claimed to have links to the Islamic State group, in the city of Marawi. The attack resulted in a shooting war that included airstrikes against suspected terrorist positions and the displacement of up to 300,000 people. On July 10, the Philippine military estimated that more than 500 people have died in the nearly two-month siege of Marawi.

The bishops expressed their condemnation “in the strongest terms possible” of the local Maute terrorist group that was behind the attack, reported ucanews.com. “They have contradicted the fundamental tenets of Islam by abducting, maiming and killing the innocent,” said the bishops, who appealed for help for displaced residents, especially those who are not yet adequately served.

“We believe that the war in Marawi is not religious,” said the bishops, adding that they have heard of “truly stunning stories of how Muslims have protected and helped Christians.”

The prelates said Christians have also been assisting thousands of Muslims who have fled from Marawi.

“These are indisputable signs that there is no religious war,” read the bishops’ statement, signed by Archbishop Socrates Villegas, outgoing president of the bishops’ conference.

Also at the meeting, the bishops elected the conference vice president, Archbishop Romulo Valles of Davao, to a two-year term as conference president.

Archbishop Valles, 66, a close friend of Duterte, has served as vice president of the conference since December 2013.