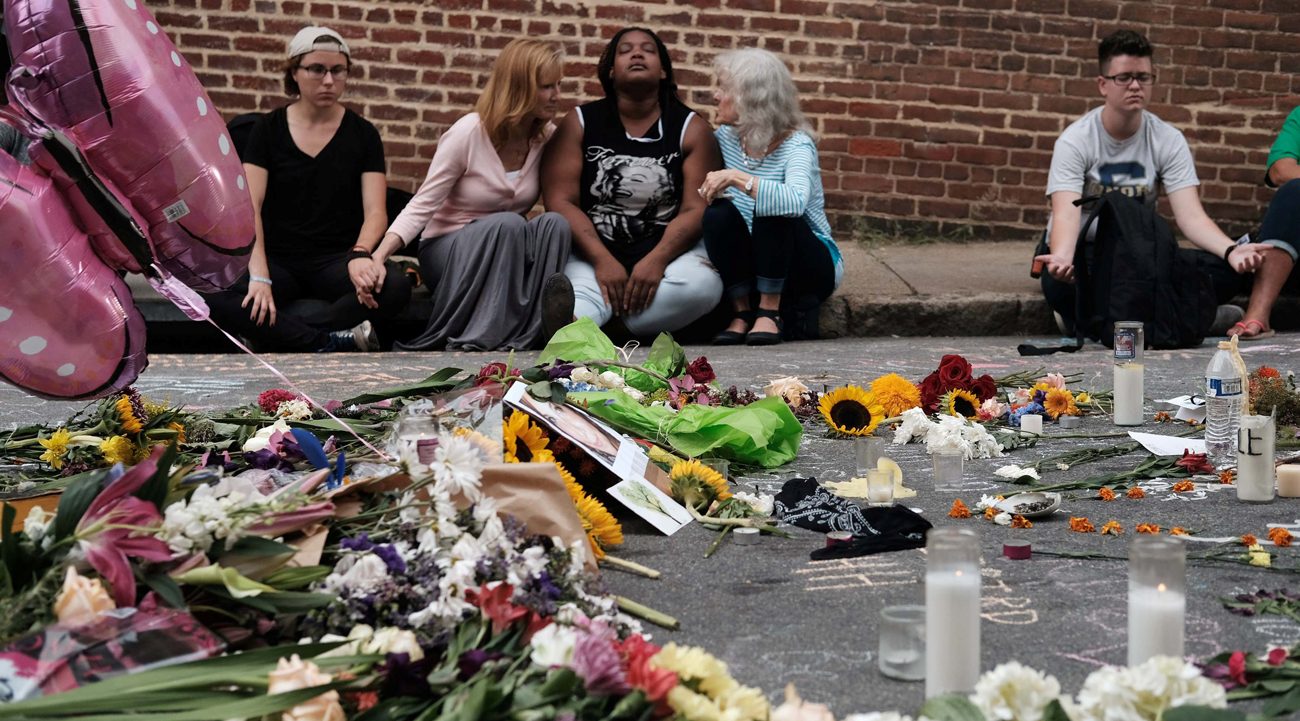 People sit by a memorial of flowers in Charlottesville, Va., Aug. 14 where an Aug. 12 car attack took place against counter-protesters demonstrating at a rally of white nationalists. (CNS photo/Justin Ide, Reuters)

WASHINGTON (CNS) — The Franciscan Action Network called on all Americans, “especially ourselves and those who have benefited from white privilege,” to look within themselves “and confront America’s original sin — the sin of racism.”

“White Americans must no longer stand silent as we continue to benefit from the attitudes and structures that put us ahead of African-Americans and other minority groups,” the organization said in an Aug. 14 statement issued in reaction to a chaotic and hate-filled weekend in Charlottesville, Virginia, Aug. 11 and 12.

The network joined with Catholic bishops, other church leaders and various groups throughout the nation in calling for peace after three people died and several others were injured following clashes between pacifists, protesters and white supremacists in Charlottesville.

Franciscan Action Network officials said they were “deeply saddened” by the loss of life and injuries Aug. 12 and were praying for those “whose lives have been tragically altered by this violence” and praying for “greater justice and peace.”

The group’s statement also asked for forgiveness from “our African-American and Native (American) brothers and sisters” for all the injustices done to them in the nation’s history and also for times when the Franciscan Action Network itself has “fallen short” in standing up for justice for them.

“FAN has not done enough to address” the ongoing issue of police brutality against African-Americans “and other issues of systemic racism. From this point forward, we vow to do better,” the statement said.

The National Black Catholic Clergy Caucus in an Aug. 14 statement strongly condemned “the hateful and racist actions and rhetoric that has taken place in our country this past weekend. We not only agree with those who have been saying that the positions proposed by the white nationalist groups are opposed to American values, we also say that they are opposed to Christian values.”

The organization prayed for those who lost their lives and those injured in Charlottesville and for their families and friends. Heather D. Heyer, 32, was killed Aug. 12 when a car plowed into a counterprotest of the white supremacists. Two Virginia State Police troopers also died when a helicopter they were in crashed while trying to help with the violent events on the ground. Nineteen others were injured in the clash.

“And we pray that the Holy Spirit may act once again to bring together the diversity of people that make up our country so that we can live up to our national motto: ‘E pluribus unum,'” said the statement, signed by Father Kenneth Taylor, president of the National Black Catholic Clergy Caucus.

Bishop Daniel E. Thomas, apostolic administrator of the Diocese of Cleveland and a former priest and auxiliary bishop of the Philadelphia Archdiocese, called Catholics and others to join him in praying “for an end to the evil of racism, hatred and violence” and examining “our own hearts and remove any bias that does not honor and respect others as created in God’s image.”

“It is only in this way that together, as families, neighborhoods and communities, we can strive to eradicate the root causes of racism,” he said.

“The angry and violent mob which gathered in Virginia this past weekend by word and deed contradicted our national creed and code of civil conduct,” said Cardinal Sean P. O’Malley of Boston, adding that neo-Nazism, racism and threats against all people of color and efforts to “banish immigrants” from this country “dishonor the basic convictions” of the country’s political and constitutional traditions. “They must be opposed in word and deed,” he said.

In Arizona, Bishop Gerald F. Kicanas of Tucson said: “Like Charlottesville, we are a community that will not tolerate racism, bigotry, fascism and white supremacy. These stand in contradiction to the values we hold as a nation and as a people of faith.

“We must strive even harder to break down these barriers (these groups) seek to erect and increase our efforts to educate all, especially young people, to put aside prejudice and hatred and work to build unity among us,” he added.

The Archdiocese of St. Louis in a statement said: “Our country has a detestable history with regard to the treatment of its citizens, including discrimination and hatred that undermine the God-given dignity of every human person. Unfortunately, some of our fellow citizens cling to these detestable ideas which continue with hate and ignorance. We must boldly march forward to a time when ‘love and truth will meet; justice and peace will kiss.’ (Psalm 85:11).”

The statement also recalled that in the midst of the 2014 protests in Ferguson, Missouri, over the fatal police shooting of a young black man, 18-year-old Michael Brown, St. Louis Archbishop Robert J. Carlson said that “our nation must deal with the sin of racism.”

“That remains true,” it said. “Racism is a sin because it is contrary to human dignity. What we have seen in Charlottesville, Baltimore, Ferguson. and elsewhere. is the result of a society that has put racism, fascism, nationalism, socialism, individualism, and other ideologies in place of God.”

The General Council of the Adrian Dominican Sisters deplored “the acts of white supremacist terrorism in Charlottesville,” adding: “Hatred and bigotry are anathema to civil discourse, the rule of law and the ideals of our democracy. As women of faith, we add our voice to those calling for an end to racist violence in our country and pray that we awaken to the loving imperative of our being created equal in the image of God.”

“This bold display of hateful rhetoric and action (in Charlottesville) impels us to call on elected leaders, and all people, to explicitly and publicly condemn white supremacy and racism and the organizations that embolden and encourage the movement,” said a statement from the Sisters of Mercy of the Americas.

“May this grieving time call us to search our hearts and ask what are the ways in which we perpetuate this culture of violence and fear? What actions will we take in response? What truths will we speak to contribute to dialogue that brings unity, peace and comfort to those who are afraid? We must continue to act,” it said.

The Ignatian Solidarity Network, a national social justice education and advocacy organization, posted on its blog statements from the leaders of Jesuit-run colleges and universities and other institutions.

“Our common humanity calls on each of us to speak out against racism, violence, prejudice and hatred,” said a post by Jesuit Father Stephen V. Sundborg, president of Seattle University.

A group called Christian Ethicists Without Borders likewise issued a condemnation of the racial hatred and violence on display and issued a statement — signed by dozens of professors of Christian studies, ethics and theology — declaring: “The evil of white supremacy and racism must be brought face-to-face before the figure of Jesus Christ, who cannot be confined to any one culture or nationality. Through faith we proclaim that God the Creator is the origin of all human persons.”

“We will bring the best of our (religious) traditions to an ecclesial and societal examination of conscience where rhetoric and acts of hatred against particular groups can be publicly named as grave sins and injustices,” it said. “We commit — through our teaching, writing, and service — to the ongoing, hard work of building bridges and restoring wholeness where racist and xenophobic ideologies have brought brokenness and pain.”

NEXT: Pa. town just a memory, but thriving parish now a pilgrimage site