Conference offers a journey of hope to divorced Catholics 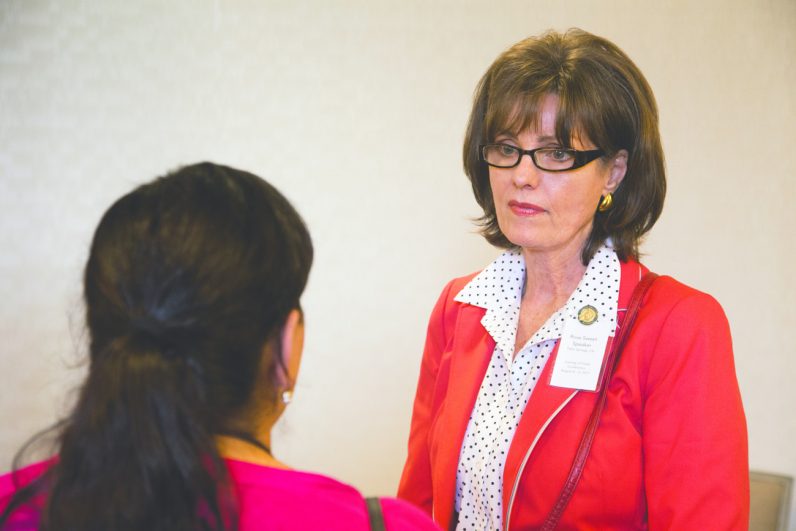 Rose Sweet, a Catholic author and speaker, talks to a participant Aug. 15 about ministering to divorced Catholics during the Journey of Hope Conference in Charleston, S.C. (CNS photo/courtesy The Catholic Miscellany)

CHARLESTON, S.C. (CNS) — Standing among a crowd of other divorced and separated people, one woman struggled to speak over still-painful emotions.

Clearing her throat and taking a breath, she explained that it had been 20 years since her divorce, but the pain still had the power to bubble to the surface.

It was a sentiment clearly understood by other participants at the Journey of Hope Conference for Divorced Recovery held Aug. 4-6 in partnership with the Diocese of Charleston.

Another man told the group it was the first time he had been able to talk about his divorce without being overcome by anger at his ex-wife.

“The wound is not to be taken lightly,” said Kathy Schmugge, director of the diocesan Office of Family Life. The office sponsored the program in conjunction with Lisa Duffy, creator of the Journey of Hope conferences.

Schmugge was one of the speakers at the event, which drew over 70 people from around the United States. She saw a lot of teary eyes over the weekend, and heard a lot about the loneliness and isolation that divorced and separated people feel every day.

“Divorced Catholics often feel disconnected from their parish communities and many often assume they are not welcome at church,” Duffy explained. “The goal of the conference is to gather them together to offer them a community experience where they can find healing, accurate answers to the questions they have about the issues they face, and compassion. The need for outreach to the Catholic divorced community is immense.”

Duffy knows what she’s talking about. Having gone through divorce herself, she said she used her own experience to create the conferences in 2010 as an opportunity for connection.

“The goal is to first let them know they are not alone in their suffering, that they are still an important part of the Catholic community, and to offer compassionate opportunities to find healing through their faith,” Duffy said.

Schmugge refers to Duffy and other leaders in divorce ministry as wounded healers — people who use their painful experiences to provide accompaniment to others and let them know they’re not alone.

During her talk at the conference, Duffy spoke on “The Six Keys to Healing.” Primary among those keys is forgiveness, she said, noting that although it can seem difficult and unbearable, forgiveness is possible.

Another key to healing is gratitude. Duffy said that while circumstances can appear dismal, it’s important to have a mindset of thankfulness. She warns that this won’t happen immediately, and could take a great deal of time. One way to cultivate a spirit of gratitude is to create a list of things to be thankful for. The list may include something as simple as having transportation, but it’s a start. Duffy said that over time, it will become natural to experience gratitude.

The conferences are held all over the country and provide the setting for people to experience hope, healing and mercy with others who are going through the same journey. Duffy noted that past attendees consistently say that being around people who understand the depth of their pain is one of the most important aspects of the event. Participants said they feel free to share their experience with others in a safe environment.

Schmugge told The Catholic Miscellany, Charleston’s diocesan newspaper, that she definitely noted the building of community and friendship over the weekend. What started as roughly 70 strangers reaching out for answers, and to give and receive comfort, ended with large groups of people joining together in laughter and shared stories.

She recalled the words that Father Bernard Oniwe shared during Mass at the conference, when he told all those in pain, “God can really help you through these darkest moments; it’s not forever.” Schmugge hopes participants realize how precious they are to God and will carry that comfort with them as they return to the difficult times in life.

Overall, there were 10 speakers at the conference, including authors, deacons, theologians, financial analysts, professors and priests. A welcoming event provided information and encouragement to parish leaders to reach out to divorced people in their communities. Participants also shared meals, an hour of eucharistic adoration, and praise and worship.

The keynote address, “Broken, Healed and Sent: The Role of the Divorced Person in the Church Today,” was given by Father Jeffrey Kirby, a Charleston diocesan priest.

Using the story of the woman of Samaria, Father Kirby shed new light on how wounds can be transformed into motivation for sharing the Gospel. He said that when Christ discovered the unnamed woman at the well and the internal wounds she carried, He healed her. Her interaction with Jesus resulted in evangelism among her neighbors. Father Kirby explained that past wounds do not define believers.

Agreeing with Father Kirby’s point, Schmugge said the overarching theme of the Journey of Hope conferences is to take the next step; to stop nursing the wound and move on to healing. Most importantly, she said, it’s about using the experience to help someone else.

“Through the testimony given, I hope that the participants see that God will use their experience of divorce or separation to help someone else one day because they have a unique understanding of the pain suffered,” she said.

“The event also made it clear how much we need to provide a compassionate and faithful ministry to those who are going through divorce and separation,” she continued. “My hope is that through the healing that took place, we may have prepared a new group of leaders in this ministry, not only in the Charleston Diocese but all the other dioceses represented in this national conference.”

Participants who attended from out of state said they hope to bring the conference to their own locations.

Contributing to this story were Anna Bolch and Amy Wise Taylor, a staff reporter at The Catholic Miscellany, newspaper of the Diocese of Charleston. Bolch is a contributor to the paper.

PREVIOUS: Catholics on Guam pray for peace amid threats by North Korea