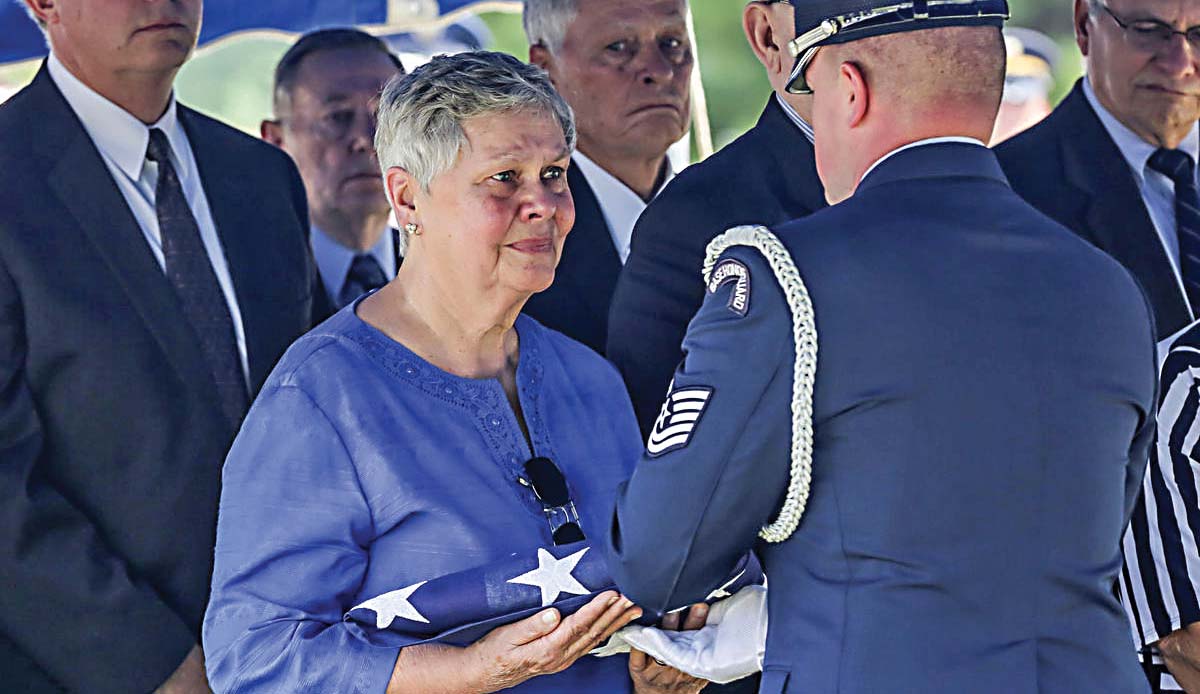 Elaine Mills, who was married to U.S. Air Force Capt. Joseph Smith for less than a year before he was killed during the Vietnam War, accepts a flag during his funeral at St. Mary's Catholic Cemetery July 17 in his hometown of Assumption, Ill. Capt. Smith was missing in action for 46 years before his remains were identified and brought back to be buried in his home parish cemetery. (CNS photo/Clay Jackson, courtesy Decatur Herald & Review)

ASSUMPTION, Ill. (CNS) — More than 46 years after he was shot down and killed over Cambodia, U.S. Air Force Reserve Capt. Joseph S. Smith has finally been laid to rest in St. Mary Cemetery in Assumption.

The process of bringing Smith’s remains home was long and heartbreaking, but he was finally buried with full military honors in July, said Father Alan Hunter, who celebrated the funeral Mass.

According to the Defense POW/MIA Accounting Agency, on April 4, 1971, Smith was the pilot of a single-seat F-100D aircraft as the leader in a flight of two aircraft on a combat mission over Cambodia. While making a pass over the target, the pilot of the other aircraft noted white vapor streaming from the left wing of Smith’s aircraft. It crashed a half mile from the target.

The other pilot reported that he did not see any ejection from Smith’s aircraft and no beepers were heard. The following day, an aerial search revealed aircraft wreckage over a large area, but no remains were observed. Due to intense enemy activity in the area, ground forces could not attempt a recovery and Smith was declared missing in action.

U.S. and Cambodia teams, assisted by the U.S. Embassy’s POW/MIA specialists, investigated the loss from 1996 until 2016. During subsequent excavations, teams recovered possible remains and wreckage associated with an F-100D aircraft.

Today, over 1,600 servicemen and civilians from the Vietnam War remain unaccounted for, the DPAA report said.

At the time of his death, 25-year-old Smith held the rank of first lieutenant, but he was posthumously promoted to captain. Because he was presumed killed in action, a memorial service was held April 17, 1971, and a tombstone was placed in the cemetery.

Shortly before this summer’s funeral, a sign was placed on that stone. It promised, “Coming home soon.” As it turned out, Smith “came home” 46 years and three months to the day after his initial memorial service.

Smith, a graduate of the University of Notre Dame, was the only son of Eugenia “Jean” and Stanley Smith. His father died before he left for the service. His mother died in 1994.

Father Hunter, now pastor of St. Lawrence Parish in Greenville, came to know Jean Smith when she was older, and he remembers how, even as the years passed, she struggled with losing her son.

“It was really so sad that she went to her grave not ever knowing what had happened to her son,” he said.

At the time of his death, Joe had been married for just less than a year to his wife, Elaine. She later married Vietnam vet David Mills, and they had two children. She is now in her late 60s and lives in Peoria. Mills was at the funeral to support Elaine, who said she was relieved that Joe was finally brought back to his hometown and buried with his folks.

Smith’s remains, kept in a small casket, were accompanied from Hawaii by Air Force Capt. Deline Tengen, who volunteered her services, and first taken to Seitz Funeral Home in Moweaqua. Hundreds of supporters lined U.S. 51 as a procession traveling to Seitz Funeral Home in Assumption was escorted by police, fire and emergency vehicles, and dozens of motorcyclists. From there, they were carried to Assumption of the Blessed Virgin Mary Church for the funeral Mass.

Those attending the funeral were given a booklet that featured a photo of Smith, posing by the cockpit of his jet, forever captured as a dashing young man in uniform. Also on the booklet was a quote from John 15:13. “No one has greater love than this, to lay down one’s life for one’s friends.”

Retired Air Force Col. Robert Plebank, one of Smith’s best friends from his days at Notre Dame and beyond, spoke at the funeral. He recalled that his buddy flew more than 100 combat missions and won two Distinguished Flying Crosses.

The funeral procession was led by a piper who played “Going Home” and “Amazing Grace.” Smith also was honored by the playing of “Taps.”

As the mourners gathered in the cemetery, one C-130 military aircraft came down “very low in the sky” and flew over Smith’s gravesite before disappearing to the north, Father Hunter reported. At the graveside, fellow combat pilots, who came from all over the country, stepped forward one by one to leave a coin on the casket — following the tradition of leaving a dime to honor the loss of someone in training and a quarter for someone lost in combat.

Although he has celebrated many funerals in his 40 years as a priest, this one in particular was both memorable and touching, Father Hunter told the Catholic Times, newspaper of the Springfield Diocese.

“This was such a unique situation — just very moving,” he explained. “They were able to bring this local boy, who was MIA for so many years, home. Now he is buried, in local soil. It’s good that the people who cared about him have closure after all these years.”

“Those of us who are old enough — even if we were at home (in America) — remember living with the terrors of the Vietnam War,” he added. “It is good to know that at least one more of our soldiers is laid to rest.”

Schlindwein is associate editor of the Catholic Times, newspaper of the Diocese of Springfield.

PREVIOUS: Pittsburgh mayor brings together faith leaders to pray for end to racism

NEXT: Ignorance is fueling racism, and respect is the antidote, archbishop says