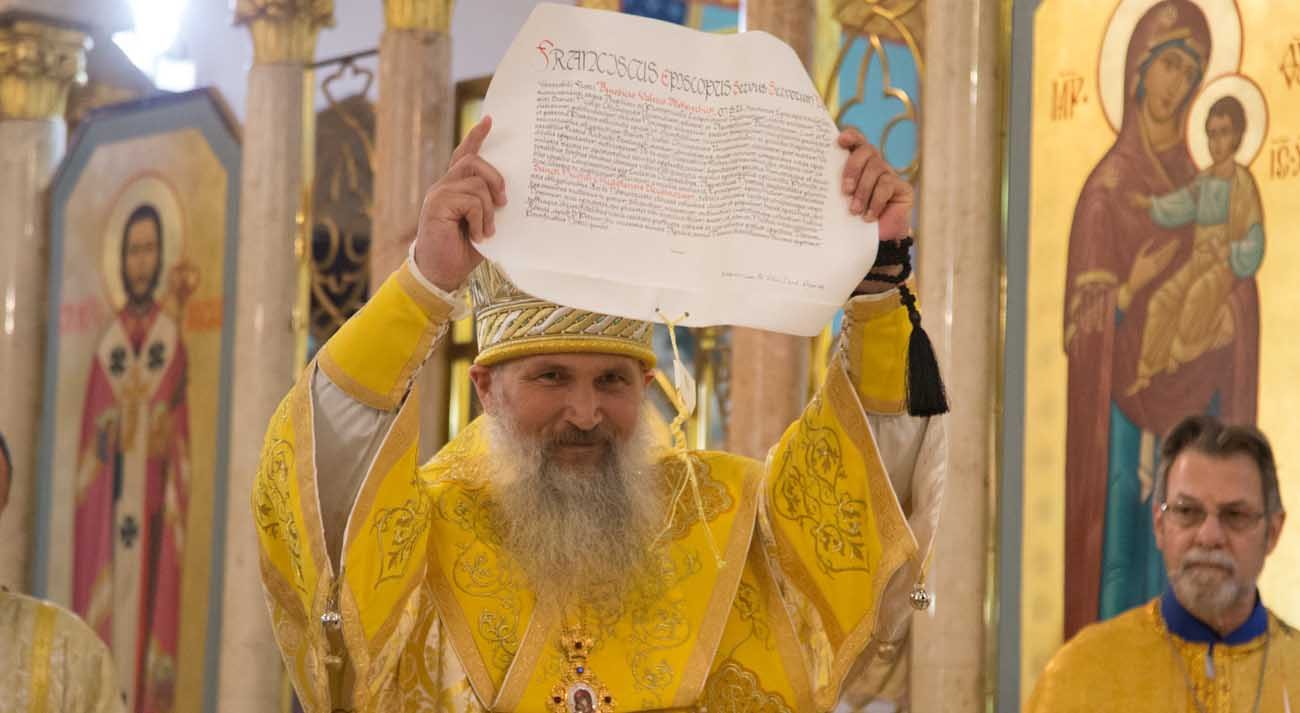 Ukrainian Catholic Bishop Benedict Aleksiychuk, former auxiliary bishop of Lviv, holds up his papal bull from Pope Francis as he is enthroned as the new head of the Eparchy of St. Nicholas in Chicago June 29. (CNS photo/courtesy Stanley M. Wlodkowski)

LVIV, Ukraine (CNS) — With the appointment of two new Ukrainian Catholic bishops in the United States, church leaders are hoping to reach out to church members in the diaspora.

“We are used to thinking about our church in the U.S. as a stabilized and settled church. However, it still is a missionary church,” said Bishop-elect Andriy Rabiy, who will be ordained in Lviv, where he was born, Sept. 3. He will serve as auxiliary bishop of the Ukrainian Catholic Archeparchy of Philadelphia.

“Our parishes established a hundred years ago are not as strong as they used to be because people had moved,” he told Catholic News Service. “They go where the jobs are. And in these new places we don’t have our parishes and missions. We need to examine carefully these migration processes and go where our people are.”

Ukrainian Catholic Bishop Benedict Aleksiychuk, former auxiliary bishop of Lviv, was enthroned as the new head of the Eparchy of St. Nicholas in Chicago June 29. He, too, told CNS he felt the need to reach out to his people.

“My eparchy, for example, includes California with its Silicon Valley,” he said. “Many Ukrainian IT professionals work there, and the majority of them are not acquainted with the life of church. We need to go to them.”

Bishop Aleksiychuk said he has decided to establish a new department in his curia to be responsible for mission and strategy.

“This department will not deal with the routine challenges but will look in the future, will keep the hand on the pulse and will be constantly looking for the new ways to talk to people about God — the God they seek, sometimes unconsciously,” he said.

Major Archbishop Sviatoslav Shevchuk of Kiev-Halych, Ukraine, the leader of more than 5 million Ukrainian Catholics worldwide, entrusted Bishop Aleksiychuk with the task of mission at his enthronement when he said, “We are a Ukrainian church, but not a church for Ukrainians.”

In the late 19th century, the Ukrainian Catholic Church, a Byzantine church, sent priests to the United States to minister to its members who had migrated. Churches, parishes, and eparchial or diocesan structures were established later in what is known as the diaspora.

Archbishop Shevchuk told CNS that church leaders decided to ordain Bishop-elect Rabiy in Lviv “as a symbol of unity of the global Ukrainian church.”

“All the bishops of our church from different countries and continents will be present, as this day we start our annual synod,” he said. “Therefore, the ordination will be the event not for one eparchy, but for the whole church.”

“These bishops were born in Ukraine but will serve our people in the diaspora,” he added. “That’s an important sign of unity and exchange of gifts within the church. When the (Ukrainian Catholic Church) in Ukraine was getting out of catacombs after the collapse of Soviet Union and started restoring its structures, our clergy and laity from the diaspora helped immensely sharing their resources — financial, human, expertise, etc. Now it’s time for the mother-church to share.”

Father Mark Morozowich, dean of the School of Theology and Religious Studies at The Catholic University of America in Washington and a Ukrainian Catholic priest, said his church in the U.S. “needs dynamic pastors who will engage the people into the life of Christ and will stimulate the Christian life of the laypeople in our parishes.”

“We have to bring our unique tradition to the world,” he said noting that people of many different races view the Ukrainian Catholic Church as “their spiritual home.”

NEXT: As diversity grows, parishes urged to address issue of racism